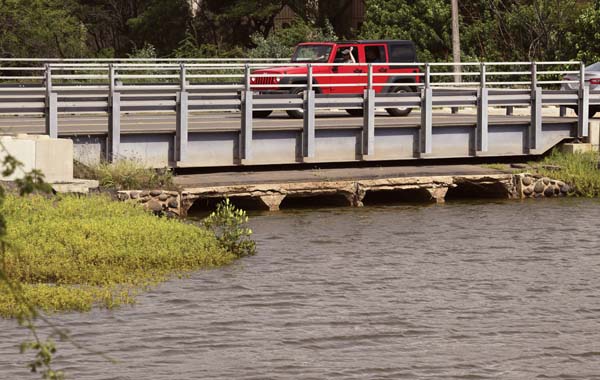 A Jeep goes over the Kulanihakoi bridge culvert on Wednesday afternoon. The County Council moved forward a resolution Friday to delay progress on the replacement of the bridge until more public comment can be obtained. -- The Maui News / MATTHEW THAYER photo

Maui County Council members adopted a resolution Friday to urge the Department of Public Works to discontinue the Kulanihakoi Bridge replacement project, although delays could risk losing $3.4 million in federal funds for the $4.7 million project.

Drafted by Council Member Elle Cochran, the resolution has no force and effect of law, so it amounts to a request to the department.

Opposition to the project comes from the Kihei Community Association and Vernon Kalanikau, the poo, or head, of the Native Hawaiian Aha Moku O Kula Makai Council. Residents of the Kalepolepo area near the old Maui Lu Resort doubt the project as planned — replacing four culverts with six and a concrete bridge structure — would stop chronic flooding in the area.

Cochran’s resolution says the Public Works Department met with the community association’s board of directors in June 2013 to present plans for the project drafted by Wilson Okamoto Corp. The association noted “various design flaws,” including failing to address routine flooding where the culverts are located, continuing down Kaonoulu Street, through the Kihei Bay Vista condominiums and over South Kihei Road. The flooding requires road closures and county maintenance work before roads can reopen, it says.

The association prefers a prefabricated bridge, as opposed to culverts, as a way to handle a greater volume of stream flow and reduce the buildup of debris during storms, the resolution says. 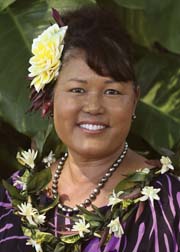 Maui Council Member Elle Cochran drafted the resolution adopted by the council Friday that urges the Department of Public Works to discontinue the Kulanihakoi Bridge project.

It also says the project would adversely affect Native Hawaiian cultural practices because a planned bypass road to reroute traffic during construction would go directly over a freshwater spring and potentially harm fish, limu and reef life, and would interfere with cultural practitioners’ offerings to the spring as an expression of gratitude and forgiveness, honoring a family aumakua.

Director David Goode told council members Friday he was willing to discuss the matter in committee.

The project has been in the council’s Infrastructure and Environmental Management Committee, chaired by Cochran, for nine months, he said.

Goode pointed out that council members appropriated money for the project in fiscal 2011. The department completed an environmental assessment and obtained a special management area permit and a shoreline setback variance, he said.

The department has tried working with the community, he said.

When Council Member Kelly King asked if the Public Works Department would be “standing down” from advancing the project while it’s discussed in committee, Goode said the department would be “moving ahead” because it needs to meet federal deadlines.

King said her concern was that the department “might march along too quickly to come to a stopping point.”

Goode said the department is not fully committed until it has a signed contract with a contractor, and “we’re a ways from that.”

He estimated that his department would not be ready to go out to bid until perhaps the end of May, then “it takes 60 to 90 days to get bids and contracts.”

Cochran said she didn’t want to see bids go out until an “extremely thorough discussion is done in committee.”

She said she wanted the community’s thoughts and feelings to be “truly heard.”

“They feel very dismissed,” she said.

Goode said the county risks losing federal money for the project if it misses project deadlines, and the council committee had nine months to take up the matter and still a meeting had yet to be scheduled. He said he could need to seek a deadline extension from the federal government.

Cochran said she’d like to see a “pause, not a stop” to allow time for further discussion.

Goode said he didn’t think it would be a problem to get a deadline extension.

Still, “we’re going to move forward,” he said. “We’re waiting for other agencies to respond to a couple of other items.”

Council members should have time to take up the project after they complete budget deliberations in May, he said.

Council Member Alika Atay said there was public testimony Friday from 10 individuals opposed to moving ahead with the project, and he said Goode’s statement of “no matter what . . . moving forward” amounted to “choosing not to listen to the community.”

Alternative plans should be considered, he said.

Goode said alternative plans were explored in the project’s environmental assessment, and the department was engaged in dialog with community organizations, including the Kihei Community Association.

“To say we’re not listening is not correct,” he said.

“The community needs to have a pause on this and have a discussion before going forward,” she said.

Cochran said she believes the project as planned by the department is like “doing a little Band-Aid.”

She said she wasn’t convinced to back off by the threat of potentially losing federal funding.

He pointed out that all the council can do in its resolution is “urge” the department to delay the project.

“We can’t make them stop,” he said. “I’m of the opinion that the reso doesn’t really make much of a difference.”

Cochran said the resolution sends a message that “there’s concerns.”

The resolution passed with six ayes, two nays and one excused member.

Maui Council Member Elle Cochran drafted the resolution adopted by the council Friday that urges the Department of Public Works to discontinue the Kulanihakoi Bridge project.