Owner’s representative sent in to investigate 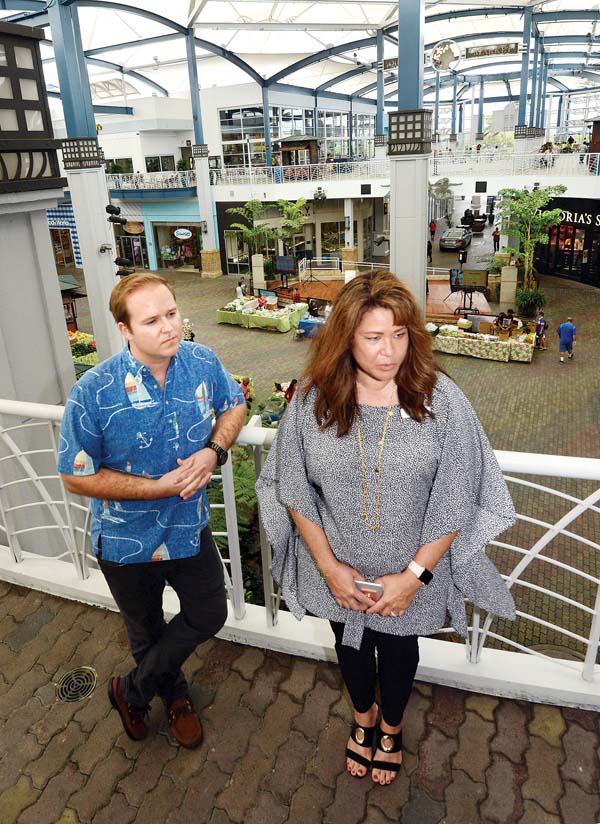 KAHULUI — Queen Ka’ahumanu Center’s security personnel have increased rotations and checks of a second-floor restroom where a 35-year-old Makawao man was killed in a machete attack in March after a confrontation on the Maui Bus on a trip to the mall.

The shopping center also is working with Maui County, which funds the Maui Bus system, to station a security guard at the center’s first-floor bus stop while bus operations are ongoing about 16 hours a day, said Kevin Jones, a mall owner representative from California sent to review the incident and other matters.

In an interview at the mall management offices Tuesday morning, Jones said Ka’ahumanu Center will have its contracted security officers attend crisis-intervention training through the Maui Police Department as well as work closer with the department and its community police officers. They will attend regular tenant meetings to answer public safety questions.

And, the center will join the Maui County Hotel and Resort Security Association, in which information is shared about incidents at properties, as a way to keep updated and to prevent suspicious activities.

Jones and members of mall management have met with the Police Department’s top brass, Mayor Alan Arakawa and Managing Director Keith Regan, and they’ve been in communication with regional officers from Allied Universal, which handles security at the mall and a handful of others on Maui and the Ala Moana Center on Oahu. 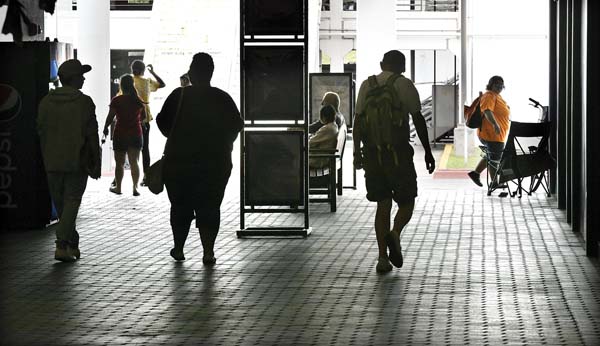 Queen Ka‘ahumanu Center officials confirmed that the lease for the Maui Bus transit hub won’t be renewed after it expires in 2020. The county pays $1 a year lease to the mall.

Jones said the mall reviewed its security policies with Allied, including security staffing levels, and they were found to be “on par” with similar shopping centers in Hawaii and regionally. The mall has 14 security officers.

In light of questions about safety from customers and merchants and about whether the fatal stabbing could have prevented, Jones said: “It was an unforeseeable incident. I have not seen the security footage, and it is still an active investigation.”

Tuesday’s interviews with The Maui News and select media outlets were the first public statements on the stabbing by the mall, which had been silent following the stabbing on March 18.

Police reported that 23-year-old Kumulipo Sylva allegedly raised a machete and swung it at Eduardo “Alex” Cerezo in the restroom outside the Macy’s men’s store. Cerezo fell to the ground and died at the scene, police said. The incident began when the two men and another man with Cerezo got on a Maui Bus at the Mayor Hannibal Tavares Community Center in Pukalani.

Police said Cerezo became upset when Sylva stared at him. The other man reported that Cerezo taunted Sylva on the bus ride until the three men got off the bus at the mall.

Sylva is being held on $500,000 at Oahu Community Correctional Center. Proceedings have been suspended while Sylva undergoes a mental health examination.

As for the lengthy silence from the mall, Jones said: “We wanted to assess what occurred and respond appropriately.”

When the incident happened, Jones said that security responded immediately along with police and that security pointed out where the suspect had fled to, which eventually let to his arrest at the nearby Kahului Community Center park.

Overall, the mall security team operates more in a service manner rather than in an enforcement role because security officers do not have arrest powers and do not carry weapons. Mall security personnel rely on police to provide armed officers when violators refuse to comply with the mall’s code of conduct, said Jones, who is with Pendulum Property Partners.

The code of conduct includes prohibition of loitering and disruptive or threatening behavior, according to a mall news release.

“Their job essentially is to deter,” Jones said of mall security.

“You can’t ensure anything. Like Maui PD can’t promise any crime won’t happen, so the security’s job is to deter violations of the code of conduct,” Jones said.

However, the victim’s family and at least one tenant say the restroom attack could have been prevented and that more should be done.

A Facebook Page “Boycott QKC — Justice for Alex” questions why the “secluded” restroom where Cerezo was killed remains open to the public, and it asks the mall to close it. The page asks the public to boycott the mall until changes are made, including putting up a security station at the bus stop with policies and procedures established for dealing with homeless people or those who might harm shoppers and mall employees.

The family could not be reached for comment Monday and Tuesday.

On May 20, 2011, a man was stabbed in the same restroom but survived the attack. In that incident, both men also got off the Maui Bus.

Toni Rojas, marketing director at the mall, said the “previous incident was seven years ago. It’s not something that happens on a regular basis by any means.”

“There are other restrooms that our patrons are welcome to use,” she said, referring to restrooms near the food court. Those include a family restroom with a door that can be locked.

She added that the mall’s anchor stores also have restrooms.

Jones said security personnel patrol on foot, and there are vehicular patrols in and outside of the mall. Security is on property 24 hours a day.

Rojas said the mall has reached out to the victims’ families to extend their condolences and to meet in person, but the mall has not yet heard from the families.

As for the Maui Bus, the mall has informed the county that it will not renew its lease because it does not have the infrastructure to accommodate the growing bus system. The lease for $1 a year is set to expire in 2020.

Jones could not say if the lease would end earlier given the stabbing. The county has plans to build a new hub nearby at School and Vevau streets.

In addition to reviewing security measures and the incident, Jones came to Maui to address another matter related to a former manager’s correspondence with a store owner.

Daniel Norton, who owns furniture store Village Home, said Tuesday that not much was done after he repeatedly reported to mall management that people were loitering on the furniture outside his store, a presence that concerned his customers. Two of his complaints came within a week of the fatal attack.

Norton said management refused to do anything about his complaint — with one mall official telling him to stop complaining and sending photos to management.

He told Hawaii News Now that a manager told him that homeless people would be rounded up, put on buses and sent to his home if he provided an address.

Norton said the issue is not about displacing homeless people but about safety. He said people were congregating outside, and he was fearful someone would get hurt. He added that his business is about compassion because his store has fair trade goods.

Rojas and Jones said that the mall did respond to Norton’s concerns about loitering generally, and that complaints are addressed whether they’re made to management or security. Jones also said that the manager who threatened to round up the homeless people and send them to Norton’s home is no longer employed at the mall. Jones did not disclose the reasons for his departure but said that the email sent to Norton was inappropriate.

In its news release, the mall said that as a privately owned property that invites the public for shopping, dining and entertainment, it has to establish its own regulations on appropriate customer conduct, as well as security response to inappropriate and unsafe activities.

“QKC strives to balance citizens’ rights with public safety in enforcing those behavior policies, and our security team refrains from profiling visitors based merely on appearance. Instead, security officers will respond to displays of disorderly behavior and other violation of the code of conduct,” the news release said.

If violators do not stop or leave the premises, police may arrest them, and they may face prosecution for criminal trespass, the news release said.

* Melissa Tanji can be reached at mtanji@mauinews.com. This article includes a correction from the original published on Thursday, April 26, 2018.

Drivers try to turn left into the Lahaina Gateway Center off Keawe Street, while cars wait to turn left onto Honoapiilani Highway. Store owners and managers said Tuesday that the center’s two entrances were blocked by heavy traffic during Monday’s opening of the latest bypass section, which starts at “cut mountain” near Olowalu.

Motorists turn right Tuesday afternoon from Keawe Street onto Honoapiilani Highway. Countless drivers were seen stopping before the highway, despite the lane being a free right turn, which contributed to delays on the street Monday. The Maui News / CHRIS SUGIDONO photos

Hinano Long of Kamehameha Schools Maui defends a shot by Maui High’s Julius Benavidez during the second set of the Warriors’ 25-22, 25-18, 20-25, 23-25, 15-11 victory over the Sabers in the MIL Division I tournament championship match Tuesday night at the King Kekaulike gym. The Maui News / MATTHEW THAYER photo

The Sabers’ Jon Aunese attacks the ball in the second set.

Maui High’s Chey Higashiguchi (from left) hits a first-set ball against the block of Kamehameha Maui’s Austin Peters and Rafael Adolpho on Tuesday.

Darren Strand testifies at a hearing on Hawaiian Commercial & Sugar Co.’s 30-year lease for water from East Maui streams in February 2017. Strand, who had been president of Hali‘imaile Pineapple Co., is moving to Alexander & Baldwin, which was the parent company of the now defunct HC&S. The Maui News / MATTHEW THAYER photo

Queen Ka‘ahumanu Center officials confirmed that the lease for the Maui Bus transit hub won’t be renewed after it expires in 2020. The county pays $1 a year lease to the mall.

Pools to reopen with reservations only