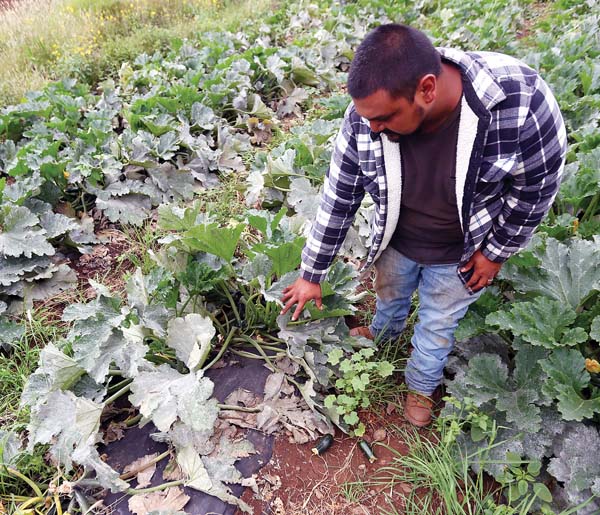 Justin Teixeira, president of J. Tex Farms, pushes over leaves covered in mildew to reveal a diseased and rotten zucchini that was damaged by heavy rains and fruit flies. This photo was taken Thursday. The Maui News / CHRIS SUGIDONO photos

KULA — Justin Teixeira surveys his farm, looking for diseased and rotting zucchini damaged by the latest downpour at the Kula Agricultural Park.

Pushing away leaves discolored by white mildew, Teixeira grabs a zucchini and breaks it in half to reveal a rotten core ruined by fruit flies and bacteria.

“The last couple of years have been really bad,” Teixeira said Thursday. “A lot of vegetable crops do better in drier weather so once the rain comes in — we’ve had our field wash out. We’ve had plants sit in the wet dirt, and the bacteria kills the leaves and crop and makes it unmarketable.”

Record-breaking rainfall throughout Maui County and the rest of the state has made it increasingly more difficult for farmers. With the rain comes a flurry of issues such as fruit flies, slugs, weeds and other threats.

Teixeira, president of J. Tex Farms, grows zucchini, eggplant, onions, corn and lei flowers on his nearly 100-acre property. The first-generation farmer began the business about five years ago and has been fighting the weather ever since. 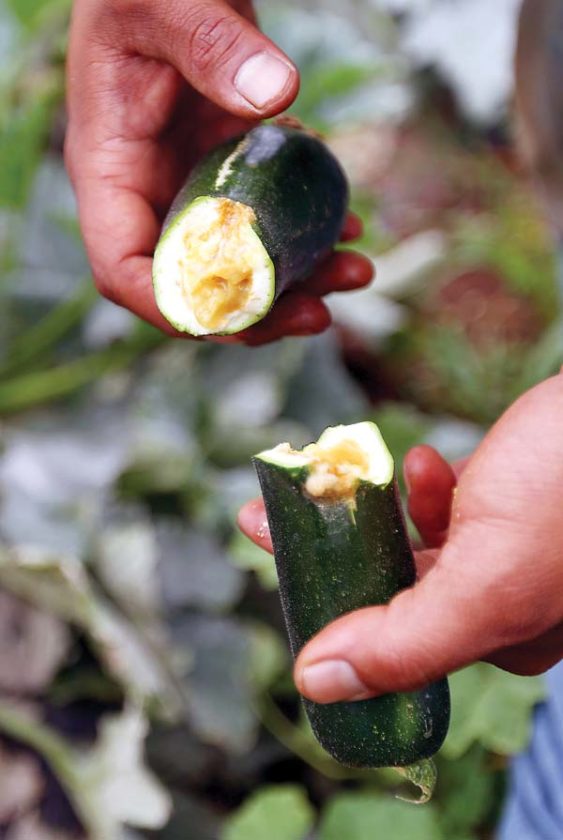 A rotten zucchini at J. Tex Farms is snapped apart after being ruined by heavy rains and fruit flies.

“It’s almost impossible to control the pests that come out after the rain,” he said. “The gulches are all alive around.”

Teixeira said the fruit flies thrive in surrounding gulches by feeding on wild cucumber and bitter melon. Despite putting out traps throughout his farm, flies could still be seen Thursday stinging the fruit.

County agricultural specialist Kenneth Yamamura said many farmers have taken a hit from the wet weather, especially vegetable growers. In recent years, farmers have lost hundreds of thousands of pounds of vegetables in a matter of months due to heavy rains.

“We didn’t get the kind of rains that Kauai got, which is a total disaster, but a lot of farmers are struggling with the weather,” he said. “It’s very wet.”

In 2016, Iao Valley was rocked by one of the worst floods in the county’s history. The deluge caused widespread destruction and triggered an emergency proclamation. In February, Waihee River recorded its highest discharge in more than 15 years, damaging several homes along its banks and stranding two people in floodwaters. 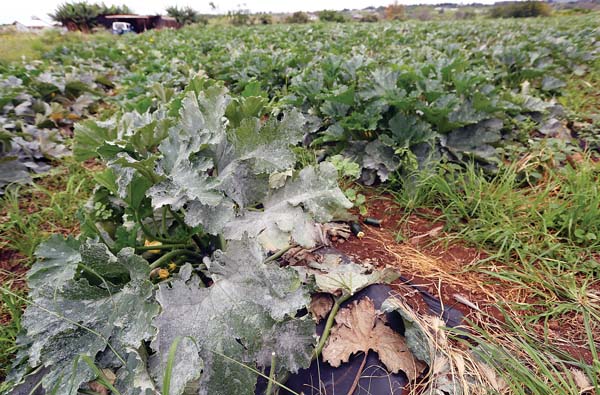 J. Tex Farms in Kula is just one of many Maui vegetable farms dealing with sporadic heavy rains that have damaged crops in recent years

Simon Russell, owner of Farm Maui, a farming services company, said the massive rain events and flooding caused the most damage for farmers. He added that Kona weather patterns have changed from what they were when he was a child and have made conditions more difficult to predict.

“I would chalk it up to climate change,” Russell said. “The trade winds used to be very reliable. It used to be less rainy on the north and east side of the island during harvest time from June to September. Now it’s anyone’s guess when it’s going to flash flood.”

Russell, who grows sugar cane and vegetables on 2 acres in Makawao, said farmers sometimes try to save money by timing their crops during rainy months so they do not have to run an irrigation system. He said some plants need very little irrigation, but when weather patterns are unreliable it makes it more difficult.

“It cuts into your profit margins, and one has to wonder if I can make any money at this,” he said.

Teixeira said the uncertain weather makes it harder to manage his expenses, and he has never had a “good year in the ground.” He said the sporadic rains can wipe out a harvest and prevent bees from pollinating.

Heavy rains form puddles on the field, and when water flows downhill it produces trenches that damage irrigation lines. Over the past year, Teixeira has been forced to install a series of diversion fields to prevent his farm from flooding.

“The last one is always the worst,” he said of losing a yield. “The big impact is the farm has no income.”

The sporadic downpours follow years of drought, which hurt ranches struggling to find cattle feed. Russell said ranchers are in prime position to capitalize, but have only one slaughterhouse to process all the beef.

“The forage is growing better in drier areas than it ever has in the last 30 years,” he said. “But then comes all the challenges of Hawaii’s economy and being able to pay your bills.”

Yamamura worried about more cases of rat lungworm disease after recording six cases from January to March last year. The first case this year was reported last week by the state Department of Health.

“These slugs and rats are a serious issue,” he said. “If it gets drier, we better focus on the rats. . . . It’s practically in every rat you see.”

Other pests such as wild pigs and axis deer have been kept at bay thanks to a professional hunter hired by the Kula Ag Park in November, Yamamura said. More than 400 deer are estimated to live around the park, and the hunter has managed to take out over 150.

Teixeira said that, “in a perfect world,” he would hope for little to no rain, but he plans to continue working his field. He said he knows he’s not the only farmer fighting Mother Nature.

“In farming, everything is driven by the weather,” he said. “We’re not doing as well as we would’ve hoped, and I’m sure the older farmers know more about it.

“We’ve been making it work with what we got, but we’re hoping it’ll get better.”

J. Tex Farms in Kula is just one of many Maui vegetable farms dealing with sporadic heavy rains that have damaged crops in recent years

A rotten zucchini at J. Tex Farms is snapped apart after being ruined by heavy rains and fruit flies.

Justin Teixeira, president of J. Tex Farms, pushes over leaves covered in mildew to reveal a diseased and rotten zucchini that was damaged by heavy rains and fruit flies. This photo was taken Thursday. The Maui News / CHRIS SUGIDONO photos

Amber Rose Langdon, a homeless woman, was reported missing Wednesday. She reportedly was living on the beach in a white passenger van on the west and south sides.