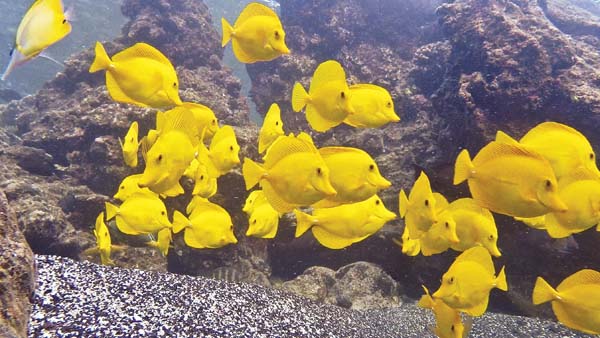 Yellow tangs are popular fish taken by aquarium collectors. A recent ruling from the 1st Circuit Court on Oahu invalidates the state’s 131 unexpired recreational aquarium collection permits. Although there are no such permit holders in Maui County, the county’s waters still see an absence of the kind of fish sought for saltwater aquariums, a Maui marine advocate said. MEL MALINOWSKI photo

The 1st Circuit Court on Oahu, which was sitting as the Environmental Court, ruled Thursday that the 131 statewide permits are invalid. Each of the permits authorized the capture of almost 2,000 fish, for about 250,000 fish per year, according to an announcement from Earthjustice’s Mid-Pacific Office, the nonprofit law firm representing the plaintiffs, including Umberger.

There are no state recreational aquarium collection permits issued for Maui County, said state Department of Land and Natural Resources spokesman Dan Dennison. And, overall, there is no significant aquarium collection in Maui or Kauai counties, according to information from the department.

Umberger added that Maui County saw many, if not all, of its commercial aquarium fish collectors leave the island and head to Hawaii island when a county law was enacted around eight years ago that requires any commercial aquarium collectors to have a county permit. County Communications Director Rod Antone said no one had taken out a commercial permit since the permit requirement was established.

“That basically shut down the legal commercial guys on Maui,” Umberger said.

But, she said some fish collected from the wild have been known to show up for sale. And yet, a history of aquarium fish collecting has greatly affected marine life in Maui County waters, Umberger said.

She heads the nonprofit For the Fishes, which aims to, among other things, enhance legal protections for coral reef wildlife.

Umberger said more aquarium fish takings happen with commercial permit holders than with recreational permit holders. Over the years, she said, fewer colorful fish are being found in coastal waters.

“They all take the most colorful, beautiful fish. They are not taking the gray ones and the brown ones,” she said. “Once you know what should be there, you realize, ‘Oh my gosh, where are the yellow tangs?’ “

Last week’s ruling stemmed from a 2012 lawsuit in which Umberger and other individuals — Mike Nakachi, Ka’imi Kaupiko and Willie Kaupiko — and organizations including the Conservation Council for Hawai’i, the Humane Society of the United States and the Center for Biological Diversity, sued the state Department of Land and Natural Resources for failing to comply with Hawaii’s Environmental Policy Act and to study environmental impacts before issuing aquarium permits.

In September, the Hawaii Supreme Court ruled that an environmental review is necessary before the state can issue commercial aquarium collection permits. In October, the Circuit Court, in line with the high court’s ruling, declared all existing commercial permits void and ordered an injunction prohibiting the Department of Land and Natural Resources from issuing any commercial permits until it complied with the Hawaii Environmental Policy Act. The question about the legality of recreational permits was resolved last week.

In response to an email requesting comment, the DLNR issued an informational report from Division of Aquatics Administrator Bruce Anderson. It said collectors on Oahu and Hawaii island have prepared environmental assessments. It also notes that the state immediately ceased issuing new commercial permits and voided any existing permits to use fine mesh nets.

The West Hawaii Today newspaper reported recently that the Pet Industry Joint Advisory Council has applied for the draft environmental assessment. It anticipates a finding of no significant environmental impact from the fish-collecting practice around Oahu and Hawaii island. To view the documents, visit oeqc2.doh.hawaii.gov/_layouts/15/start.aspx#/EA_EIS_Library/Forms/AllItems.aspx.

Members of the public have until May 8 to comment on the draft environmental assessment.

As for the recent ruling on recreational aquarium collection permits, Umberger said: “It’s well past time for DLNR and Gov. David Ige to step into the 21st century and stop their magical thinking that marine life captured for aquariums can somehow sustain limitless extraction without impact. No other wildlife or ecosystem on Earth has been able to withstand such an assault, and Hawaii is no exception.”

* Melissa Tanji can be reached at mtanji@mauinews.com. The Associated Press contributed to this report.