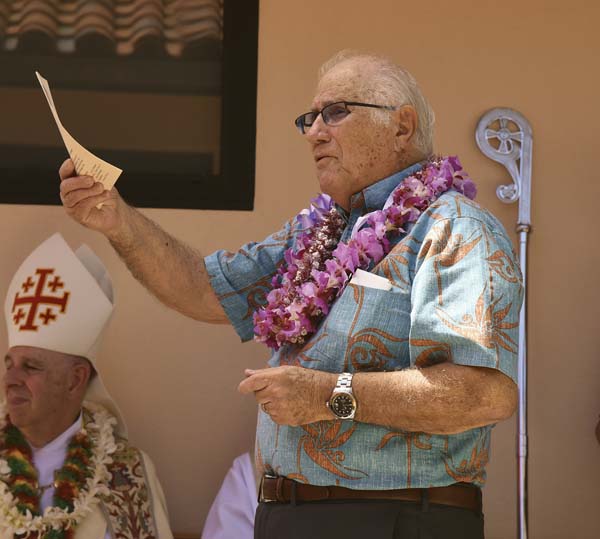 The resignation of two-time speaker of the House and longtime Wailuku Rep. Joe Souki has kicked off the official search for his successor, at least for the rest of his term this year.

In his letter of resignation, Souki, 86, says that “I have learned in the last few weeks that certain women have complained to the Hawaii State Ethics Committee, accusing me of inappropriate and unwelcome conduct. That conduct included ‘touching’ and ‘kissing’ more than one woman inappropriately.”

He said he’s been told the conduct happened between three and eight years ago.

“I have absolutely no memory of ever acting inappropriately with any woman at any time, as a member of the House or in a private setting,” he said. “I am greatly saddened that something I did was misunderstood and believed to be inappropriate conduct. . . . I apologize to the women that believe I treated them in any unwanted or inappropriate manner.”

Souki’s resignation was the result of a settlement of a sexual harassment charge filed with the state Ethics Commission by Rachael Wong, the former head of the Department of Human Services. Souki also must pay a $5,000 administrative penalty and issue a public apology. He’s barred from seeking public office for at least two years.

Maui Democrats in the District 8 Council will hold a meeting this week to determine how to fill the vacancy in the 8th House District, which includes Wailuku, Waikapu, Kahakuloa, Waihee, Waiehu and Puuohala. At the meeting, the application and selection processes will be formalized, and deadlines and rules will be established.

Any district resident and Democrat in good standing for at least six months may submit his or her name for consideration.

Applicants must fill out a “statement of candidacy” form, submit a resume and complete a questionnaire, which will be available at www.mauidemocrats.org. Only applicants may submit their names. No third-party recommendations will be considered.

The final three names of candidates will be forwarded to Gov. David Ige, who will appoint one of them to fill the vacant seat.

The governor has 60 calendar days, following the first day of the vacancy, to make the appointment.

As of Thursday, five Wailuku residents had taken out nomination papers for the 8th House seat. None of them so far had filed to become official candidates for the Aug. 11 primary election.

The candidate filing deadline is June 5.

The general election is Nov. 6. However, if a candidate from another party doesn’t contest the seat, the race will be settled in the Democratic primary.