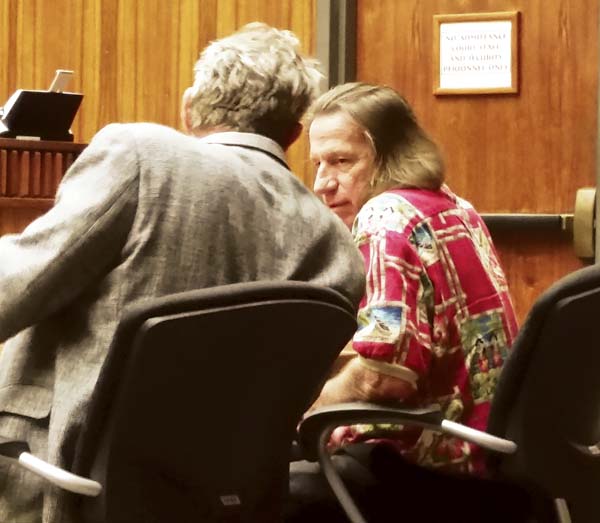 WAILUKU — A man who testified he wasn’t trying to kill a bicyclist with his van was found guilty Monday of attempted felony assault.

After deliberating for about three hours, a 2nd Circuit Court jury returned the verdict convicting Mark Becker of a lesser charge of attempted first-degree assault.

Becker, 56, was originally charged with attempted second-degree murder of Carlos Loria. He suffered a broken hip after being launched 12 to 15 feet when Becker’s van hit the bicycle as Loria was riding on the sidewalk along East Wakea Avenue in Kahului in the early-morning hours of April 2, 2017.

The bicycle jackknifed, throwing Loria over the handlebars and saving his life, said Deputy Prosecutor Andrew Martin. “A foot closer to that van, and he’s done for,” Martin said in closing arguments to jurors Monday morning.

Surveillance video from nearby businesses showed Becker’s van go off the road and onto the sidewalk to hit the bicycle, which was caught under the van and run over.

The collision followed a confrontation between Becker and Loria at about 4 a.m. that day by a dumpster at a nearby business complex at 325 Hukilike St.

Loria, who was staying overnight in his brothers’ graphic design business, had gone to throw trash in the dumpster when he encountered Becker, whose van was parked next to the dumpster.

The two exchanged punches and were on the ground scuffling before Loria said he was going to call police and Becker drove his van across the street.

Loria said he had ridden his bicycle to look for the van so he could get the license plate number before calling police.

Becker testified he began following the bicyclist after he threw rocks at the van windshield, almost hitting Becker.

He also testified he was reaching over to roll down the passenger-side window to yell at Loria when the van was “being steered by itself” as it accelerated over a curb at Wiki Wai Wash and went off the road. Becker said he was trying to avoid a fire hydrant, tree and pole and was having trouble seeing through the shattered windshield when the van hit the bicycle.

He said he immediately braked and turned right to avoid hitting Loria on the ground.

Both Martin and defense attorney Gerald Johnson asked jurors to watch the surveillance video showing the van behind Loria as he rides his bicycle.

“He’s lucky to be here,” Martin said in his closing argument. “This case came down to a matter of inches. When you watch the video, how do you come to any conclusion other than it was the defendant’s intent to take Carlos’ life.”

In his closing argument, Johnson said the prosecution didn’t prove beyond a reasonable doubt that Becker intended to kill Loria.

“If he wanted to kill Carlos, he could have done it right there by the dumpster,” Johnson said. “But that was not his intent. In his heart, he did not want to hurt anybody.”

After hitting the bicycle, Becker didn’t reverse to run over Loria as he lay on the ground, Johnson said.

Becker is set to be sentenced Aug. 1 on the assault charge, which carries a penalty of up to 10 years in prison. He is being held in lieu of $250,000 bail at the Maui Community Correctional Center.