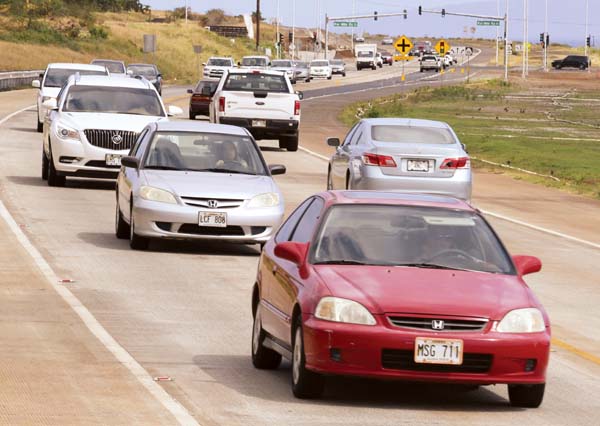 While Lahaina-bound Friday traffic used to back up all the way through the pali to Maalaea, it flows smoothly at 3 p.m. Friday. After an April 23 opening that featured a major traffic jam, the new 2.7-mile southern portion of the Lahaina bypass road is showing it’s moving motorists faster through West Maui. The bypass is officially known as Route 3000. -- The Maui News / MATTHEW THAYER photo

Since the latest phase of the Lahaina bypass caused a major traffic jam on opening day, drivers headed to West Maui believe it’s gotten much better.

“There’s no question the traffic is moving faster between Lahaina and Kahului,” said Joe Pluta, vice president of the West Maui Taxpayers Association. “We’re thrilled about that.”

But the lack of access to Honoapiilani Highway at “cut mountain” near Olowalu has also concerned people who thought the bypass was going to offer an additional route into Lahaina.

“It definitely wasn’t what I understood it to be,” said Zeke Kalua, who is the mayor’s executive assistant for West Maui but spoke as a private citizen. “The perception (of) most, including myself, was that by having Honoapiilani Highway uninterrupted and offering the bypass as an option, that it creates more than one way into the West Maui area. . . . They basically just moved the gridlock.”

When the new 2.7-mile southern terminus opened on April 23, a delayed opening time and confusion over the new route created a traffic jam that doubled some drivers’ commute times. Since then, paving and striping on the road have been completed, and the Southern Connector Road that provides Maalaea-bound traffic access to Honoapiilani Highway has opened. Save for some landscaping, work on the southern part of the bypass — now known as Route 3000 — is just about wrapped up. 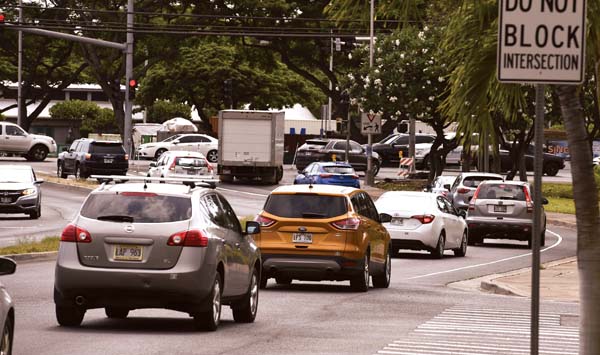 Traffic turning from Keawe Street onto Honoapiilani Highway in Lahaina backs up briefly Friday afternoon behind drivers who stop or pause instead of continuing smoothly onto the dedicated merge lane. -- The Maui News / MATTHEW THAYER photo

Brad Quinto, Ocean Safety captain for the West District, said he drove the bypass on opening morning but hasn’t seen a traffic jam like that on the bypass since.

“The bypass has been working,” said Quinto, who drives the road five to six days a week, sometimes four times a day. “Overall my experience with it is a big improvement from the way it was before.”

Quinto added that it’s freed up congestion on “the scenic route,” the coastal Honoapiilani Highway.

“It’s so nice to drive this road close to the speed limit instead of bumper to bumper,” Quinto said.

Shelly Kunishige, a spokeswoman for the state Department of Transportation, said Maui Bus travel times on the Maalaea to Wharf Cinema route have also improved. For example, on April 13, before the southern terminus opened, the 1:55 p.m. route took close to 41 minutes; on May 11, it took just over 32 minutes. Meanwhile, the 4:55 p.m. route went from just over 54 minutes on April 13 to a little over 26 minutes on May 11, a time savings of nearly half an hour.

But while Pluta was happy with the traffic flow, like Kalua he was also concerned about cutting off access to Honoapiilani Highway at “cut mountain” and instead rerouting all traffic onto the bypass.

“This was supposed to be a bypass, not a road closure,” Pluta said. “And now they’ve taken away the options we have. . . . It used to be two lanes, and now we still got two. It’s just the two are now faster.”

West and South Maui Rep. Angus McKelvey, a vocal critic of the state’s handling of the bypass, said he also worried about the bypass becoming “the only road” and the state abandoning Honoapiilani Highway.

However, Kunishige said the state still considers both the bypass and Honoapiilani Highway as “principal arterials,” or roadways that connect major metropolitan areas. She said the department doesn’t have plans to reopen access to Honoapiilani Highway for Lahaina-bound traffic at “cut mountain,” but she said that, “as far as I know, we are going to continue to support both routes” by maintaining and operating them.

She added that the bypass still creates extra options for drivers.

“With all the different connector roads, it pretty much is an alternative,” Kunishige said. “And I think once the traffic signal modernization is completed, that will only add to the efficiency of the route.”

The department is working to modernize about 80 traffic signals on Maui, and the ones on the bypass are a priority, Kunishige said.

Quinto, meanwhile, didn’t see a problem with traffic getting funneled onto the bypass.

“Why can’t you drive down the road another minute and make a left turn at a stoplight (onto Honoapiilani)?” Quinto said. “If you turn down at ‘cut mountain,’ they’re going to be forced to put in another stoplight. . . . Even though there’s opposition to a lot of it, there was opposition to opening this road in the first place, and it’s working.”

At Keawe Street where the northern terminus of the bypass ends, part of the congestion has resulted from drivers not realizing they can make a nonstop right turn onto Honoapiilani Highway. In April, the department installed delineators to help visually remind drivers.

“The delineators helped, and we are currently consulting with the contractor there on what other things can be done to help remind people,” Kunishige said.

She said the department is discussing future improvements on Keawe Street with the county.

Safety along Keawe Street has long been a concern for Pluta.

“I see three to four near misses every single time, every single day,” Pluta said. “I know it says to slow down, but they’re coming off that roadway, and they’re coming into an area where cars are trying to get across from Walgreens, residents are getting out of their condos and shoppers are trying to go to Foodland. All this incredible amount of activity going on in the wrong spot.”

Pluta said he hopes an extra crosswalk or even another stoplight could help solve the problem.

McKelvey said there were still improvements to be made but judged that they were things “that in the overall scheme are fixable,” such as providing better signage at Keawe Street or relocating poles for traffic signals in the bike shoulder lane that make right turns onto Kai Hele Ku or Hokiokio Place hazardous.

“There were improvements . . . that have come to fruition,” he said. “All along we said if the bypass was going out of (Lahaina) town, it’s going to be awesome. It’s going to help. But coming into town, we’re simply moving the problem up the hill, so to speak.”

To address that, McKelvey hoped to see the bypass’s wide shoulders eventually paved into additional lanes. He said it was something he wanted to pursue in the next legislative session.

“It’s going to be a top priority to try to get funding for those four lanes in particular,” he said.

And, despite his continued criticism of the bypass project, McKelvey said “one of the huge pluses” is that it’s helped clear up traffic on Honoapiilani Highway.

Kalua hasn’t made up his mind quite yet on the bypass.

“I think right now it’s kind of a 50-50,” Kalua said. “Right now we don’t have school. . . . And we’re not necessarily in our big peak season. So we don’t necessarily have a gridlock going on at this point, so that’s really nice. Whether or not it’s attributed to the success of (Route 3000), I guess we’ll wait and see.”