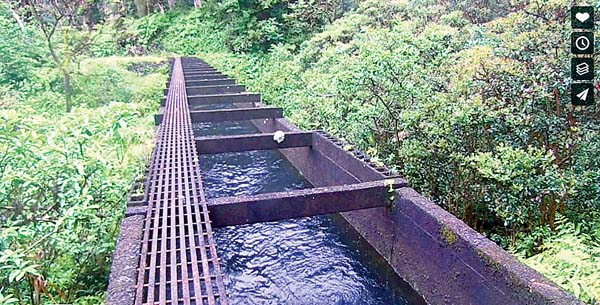 The East Maui Irrigation stream diversions, which have a 450 million gallon per day capacity, were built in the 1870s. State Department of Land and Natural Resources photos

A 17-year battle over water rights in East Maui that pitted Native Hawaiian taro farmers and practitioners against Alexander & Baldwin and its stream diversions for agricultural ventures concluded Wednesday with the state water commission ordering the full restoration of flows to 10 streams for taro growing and limited or no diversions for another seven streams to restore habitats.

“Making the full restoration of 10 streams the new ISFS (in-stream flow standard) is unprecedented,” said Summer Sylva, staff attorney with the Native Hawaiian Legal Corp., on Wednesday. “Achieving 90 percent habitat recovery for seven streams is a huge triumph; and ensuring mauka-to-makai flows for all previously diverted streams reflects a valuing of the East Maui watershed for the life and traditions it supports — taro farming, fishing, hunting, gathering, recreational use, stewardship and its awe-inspiring beauty.”

In 2001, the group filed a petition to amend the flow standards of more than two dozen East Maui streams that A&B had been diverting since the 1870s through ditches, tunnels and siphons for its sugar cane fields in Upcountry and Central Maui. Na Moku complained that the water diversions with a 450 million gallon a day capacity dried up streams that hindered taro farming and other native practices and disrupted the natural habitat in the streams.

Through the years, the proceeding wended legal and legislative turns and the closure of Hawaiian Commercial & Sugar Co. and the end of sugar operations on Maui in 2016. HC&S’ parent company, Alexander & Baldwin, has embarked on a plan to keep 31,000 acres of its former sugar fields in agriculture.

A series of ditches, tunnels and siphons help get water from East Maui streams to Central Maui and Upcountry. The water had been used for sugar operations, but Alexander & Baldwin says it still needs the water for its diversified agriculture plans.

A&B said it needed 89 mgd for its diversified agriculture plans, which include cattle ranching, growing energy and other crops and forestry. The commission estimates that its decision and order provided for 90 percent of “reasonable irrigation needs” for 23,000 acres of important agricultural lands.

The decision and order notes that A&B could be expected to use about 18 mgd of water from brackish wells, leaving only 60 mgd from stream diversions. Sylva pointed out that is much less than the 165 mgd used for sugar operations.

A&B spokesman Darren Pai said Wednesday: “It’s a lengthy decision. We are still reviewing it relative to our goal, which has always been to put the entire former HC&S footprint into sustainable, diversified agricultural operations.”

The commission tried to balance the needs of stream users with the “economic and social benefits” of off-stream users, such as A&B and the county Department of Water Supply, which draws an average of 7.7 mgd for Upcountry residents and an average of 3.5 mgd for the Kula Agricultural Park.

The commission said that its “primary trust responsibilities” were the maintenance of water in their natural states; domestic water uses of the general public, particularly drinking water; Native Hawaiian traditional and cultural gathering; and reservations for water by the Department of Hawaiian Home Lands.

The 24 streams were classified in four broad categories that represent different priorities and management strategies: taro and community streams, habitat streams, public use streams and other streams.

No diversions were allowed on 10 streams that have historically supported taro cultivation. They include Honopu, Huelo, Hanehoi, Pi’ina’au, Palauhulu, Ohia (Waianui), Waiokamilo, Kualani, Wailuanui and Makapipi. The majority of these streams have been diverted for more than 100 years, the commission said.

The decision and order retained the potential of continued use of a portion of Waikamoi, Puohokamoa, Ha’ipua’ena and Honomanu streams and the diversions that provide water to the Upper and Lower Kula Pipelines for off-stream users.

“We believe it to be reasonable and beneficial to use a portion of East Maui stream water for the development of diversified agriculture on Maui’s central plains,” the commission said. “We are also concerned that leaving these lands in an uncultivated state will increase wind-blown erosion that will damage Maui’s nearshore marine environment, air quality and tourism competitiveness.

“The commission’s intent in this decision is to ensure that a sufficient amount of off-stream water is available to support the cultivation of diversified agricultural crops on the lands designated as important agricultural land in Central Maui.”

Sylva called Wednesday’s decision and order “a more balanced decision . . . a forward-looking decision” compared to those in the past. She said A&B’s plans for the old sugar fields are “super-ambigious” and “when you lack certainty you should err on the side of resource protection.”

The decision and order “affirmed” the water commission’s role as the “primary guardian” of “public trust resources,” such as water, and “its affirmative duty to malama ‘aina, malama kahawai, malama honua,” she said.

“Our community spread its wings over the whole of the Ko’olau and accomplished something great for the waters of Kane, for all the people of Ko’olau, for all people of Hawaiian ancestry, and for our public trust,” said Ed Wendt of Na Moku.

The decision and order gives them the water and tools “to build a vibrant community, a vibrant future,” he said.

The commission emphasized that the in-stream flow standards only address the quantity of water in each stream and “does not allocate any additional water that can potentially be diverted off-stream to support other activities.” Water leases on state land are the purview of the state Board of Land and Natural Resources.

The commission did offer the BLNR some recommendations. First, that improvements be required to minimize leakage and waste (A&B reported 23 percent transmission losses) and to improve timely monitoring of off-stream diversions; and second, to set aside a portion of water lease revenues to support the East Maui Watershed Partnership, to monitor stream flows and to fund native habitat restoration. (A&B pays $160,000 a year for its leases.)

The decision and order noted that contested hearings, like this one, provide legal finality but “are seldom the most effective process for achieving vision, objectives and benefits called for in the State Water Code.”

Fire Chief Jeff Murray appears at a County Council meeting in November. He will be retiring at the end of the month after 10 years as chief. The Maui News / CHRIS SUGIDONO photo

The crowd in Lahaina cheers the Fourth of July fireworks show last year. The LahainaTown Action Committee said Wednesday that it is about $20,000 short of its $50,000 goal for the event. The Maui News / COLLEEN UECHI photo

The Baldwin High School baseball team, shown celebrating with their championship trophy after winning the Division I state title in May, were ranked No. 8 in the season’s final USA Today Super 25 national rankings. ANDREW LEE photo

The Braves’ Kurt Suzuki rounds the bases after homering off the Blue Jays’ J.A. Happ on Wednesday. The Canadian Press via AP / Nathan Denette photo

The East Maui Irrigation stream diversions, which have a 450 million gallon per day capacity, were built in the 1870s. State Department of Land and Natural Resources photos

A series of ditches, tunnels and siphons help get water from East Maui streams to Central Maui and Upcountry. The water had been used for sugar operations, but Alexander & Baldwin says it still needs the water for its diversified agriculture plans.