Bardellini deemed to have violated policy on workplace violence 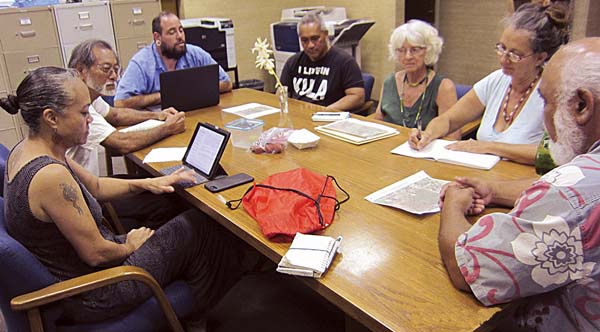 Maui County Council Member Alika Atay (right) sits across the table from his executive assistant Brian Bardellini in a May 2017 meeting with the Kihei Community Association. Bardellini has been barred from the seventh floor at the county building since October and also is prohibited from interacting with state Agriculture Department employees or entering any of the department’s offices statewide. -- MIKE MORAN photo

Since October, an executive assistant to Maui County Council Member Alika Atay has been barred from the seventh floor of the county building, where the Office of Council Services is located, after violating a workplace violence policy, according to multiple county workers.

Brian Bardellini also has been banned from interacting with state Agriculture Department workers or visiting department offices statewide due to abusive language, inappropriate behavior and attempts to provoke physical confrontations with staff members over a three-year period, department officials said.

Four county workers confirmed last month that Bardellini is prohibited from the floor where the Office of Council Services is located. Council staffers have been told to call police if Bardellini violates the directive.

The county workers who are familiar with the situation declined to be identified because they were not authorized to speak to reporters.

Atay declined in-person and phone interviews and sent an email Friday, saying the “allegations are without merit and unfortunately are made in an effort to perpetuate a political agenda.” 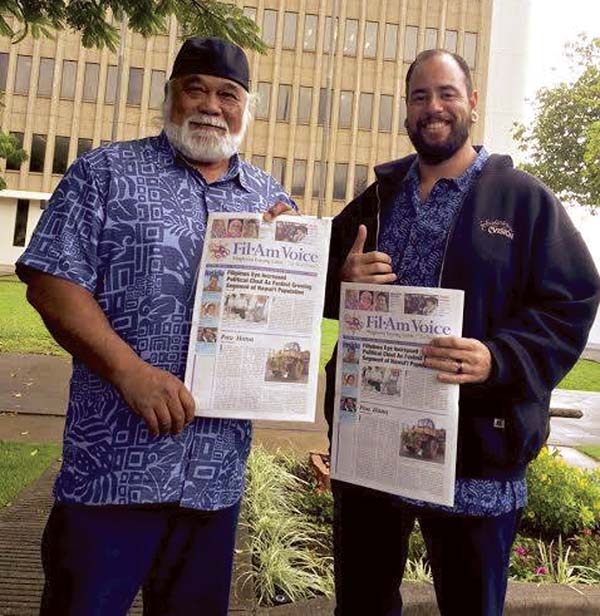 Maui County Council Member Alika Atay (left) stands next to his executive assistant Brian Bardellini while holding a Fil-Am Voice newspaper outside the county building in a photo taken in December 2016. -- Fil-Am Voice photo via Facebook

Bardellini also declined to be interviewed in person or by phone and did not respond for comment by email.

“As I’ve said previously, Mr. Bardellini is indispensable to my duties on both a daily and long-term basis,” Atay said. “Maui County benefits from having someone with his dedication, perseverance and skill working hard for the people and for what is right.”

The county workplace violence complaints and actions against Bardellini were outlined in an Oct. 16 letter penned by council Chairman Mike White and sent to Atay. White said in the letter that he had received “several recent, separate reports” about Bardellini being “loud, aggressive, intimidating, confrontational and unprofessional towards a council member, the supervising legislative attorney and Office of Council Services staff.

“Mr. Bardellini’s behavior is completely unacceptable in the workplace and will not be tolerated any longer,” White wrote to Atay. “You are aware of his uncivil behavior, including being present when it has occurred, and yet have taken no action to address it.”

In the letter, White additionally instructed Office of Council Services staff, including Supervising Legislative Attorney Greg Garneau, the legislative attorneys, analysts, secretarial and support staff to no longer communicate with Bardellini in any way. Staff was told to interact with Atay alone and that emails from Atay’s office should be ignored because Bardellini has access to them.

Atay also was to meet with staff in person on the seventh floor when conducting council or committee business, according to White’s letter. Bardellini was told not to approach or interact with council members and their staff without prior permission from the council member.

All of the conditions laid out in White’s letter went into effect in October and remain in effect, according to the county workers.

Council Member Bob Carroll, vice chairman of the council, said in a phone interview earlier this month that he headed up the workplace violence investigation involving Bar-dellini and that it was completed over a month ago.

He said he could not comment on the investigation or if action was taken against Bardellini.

White said in phone interview Friday that he has been advised by county attorneys not to discuss personnel matters, but he stood by his letter, including his comments that he would have terminated Bardellini if he were working in his office.

White also confirmed that he did not originally publicly release his letter, which Maui Time published Nov. 30 on its website.

White came under fire at the end of last year for introducing a bill that would have allowed council members to vote to remove individual members’ staff. Residents sharply criticized White, calling it a “power grab” and “undemocratic.”

Currently, only council members have authority to hire or fire their employees. The council chairperson can investigate official complaints against a staff member, but it’s up to the council member to take disciplinary action.

White declined to comment on the bill, which has been shelved by council members.

With the restrictions in place, county workers said earlier this month that they were not aware of any recent issues with Bardellini, but believe there is still a level of “tension.” One of the workers complained that Bardellini has “no respect for other people’s time” and gives “unreasonably short deadlines to respond to and deliver.”

In his emailed statement, Atay said that his office had filed several violence in the workplace action plan complaints against council members and directors as well as appointed and civil service employees. Targets of the complaints included White and Garneau, neither of whom have been investigated, Atay said.

Atay added that the complaints preceded the ones filed against his assistant.

“Weeks after we made these complaints these same people retaliated by creating allegations against Mr. Bardellini in a so-called ‘investigation,’ ” Atay said.

Before being appointed as Atay’s executive assistant, Bardellini was the subject of complaints in 2016 when state Department of Agriculture officials attempted to treat a property Bardellini rented in Haiku that was infested with invasive little fire ants.

An agriculture staffer testified in 2nd Circuit Court in 2016 that state officials and others who went onto the property were met with yelling and profanity and were threatened by Bardellini.

Bardellini’s landlord, who eventually permitted department officials on the property over Bardellin’s objections, said he was verbally aggressive.

The Agriculture Department sent Bardellini a trespass warning at the end of last year after staff members reported being harassed, threatened and intimidated. The warning letter, dated Dec. 7 and signed by Plant Industry Division Administrator John McHugh, was sent to Bardellini, Atay and White.

McHugh told Bardellini in the warning letter that the action was “necessary due to the lack of courtesy and civility you have displayed while interacting with HDOA staff members.”

“These reports include numerous complaints about your verbally abusive language, inappropriate behavior and your attempts to provoke physical confrontations,” the letter reads. “Such conduct is unacceptable.”

The incidents addressed in the letter span March 2015 to Sept. 29, 2017, when Bardellini personally appeared at the department’s main office in Honolulu. As a result, Bardellini was instructed not to appear at any of the department’s four offices on Maui, Kauai, Big Island and Oahu or else be subject to arrest and prosecution.

All of Bardellini’s communications with the department were required to be through mail or email — phone calls would not be accepted. The conditions of the warning were in effect for one year.

“HDOA is responsible for ensuring that its employees are protected from rude and insulting behavior, whether that behavior is initiated by other government employees or members of the public,” McHugh wrote. “HDOA employees are entitled to feel safe in their work environment. Your menacing actions have subjected HDOA staff to an atmosphere of hostility and fear.”

McHugh and Scott Enright, chairman of the Board of Agriculture, could not be reached for comment.

Atay said Bardellini was attempting to have meetings with department employees and that the trespass warning is “without merit” and “absurd.”

“The employees cited in the so-called (county) ‘investigation’ as well as the employees of the Department of Agriculture are people we are investigating to determine whether they were acting in the interest of the people of Maui,” Atay said.

“My agenda as a council member is to advance progressive goals on behalf of the people of Maui,” Atay continued. “I cannot and will not support so-called ‘investigations,’ and the like, that are nothing more than retaliatory smear campaigns to avoid the disclosure of the truth.”