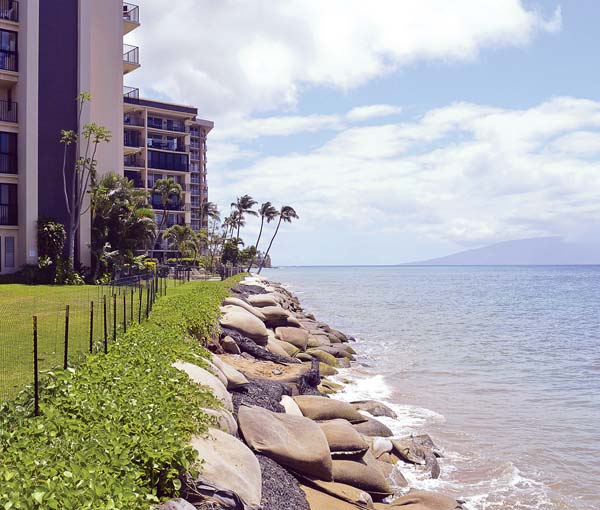 Surf washes up against a sandbag revetment at the Hololani resort in Kahana. With efforts to build a 400-foot-long seawall hitting roadblocks, the Hololani association is planning to drive in sheet piles to aid shoreline protection. A couple of West Maui groups have filed a lawsuit opposing the change in plans. The Maui News / BRIAN PERRY photo

The multistory Hololani buildings began facing threats from erosion, and the association started putting up shoreline hardening measures during the winter of 2006-07, the court filing said. In February 2007, the state Department of Land and Natural Resources gave the Hololani association emergency authorization to install geotextile sandbags and erosion blankets for three years — after initially putting up an illegal structure. The emergency permit has been reauthorized three times as of May 2014, and the structure remains today.

In the meantime, the Hololani association began work on a more permanent solution, a 400-foot seawall, which received approval from the Maui Planning Commission in June 2014.

The revetment is a sloped wall with a toe that extends into the ocean and would be located in the shoreline area, said acting Planning Director Michele McLean on Monday. The revetment would be backed by sheet piles.

Because the seawall would encroach onto the state-owned shoreline, the Hololani association was required to obtain an easement, which called for approval by the state Legislature. In the past session that ended in May, the Legislature did not act on the request for the easement.

As a result, the Hololani association sought approval from then-Planning Director Will Spence for a modification of the project. Only the sheet piles would be installed and their alignment would be moved off the state shoreline onto Hololani property, a June 29 letter from Spence to the condo association said. The largest alignment change would involve moving the sheet piles 7 feet mauka of the approved plans.

The existing sandbags would remain; the seawall project would be abandoned, the letter indicates.

The sandbags and sheet piles are only temporary measures until a regional beach nourishment project is completed, said McLean. The properties along Kahana Bay have banded together on the beach restoration project. When that is completed, the revetments and steel piles will be removed.

Spence’s approval of the project change, finding the sheet piles a “minor realignment” change and in “substantial compliance” with its special management area permit, is one of the key issues of contention for the plaintiffs.

Collins said that the Maui Planning Commission, not Spence, should have made the decision on whether the changes were in compliance with the 2014 SMA permit. This would have opened the decision to public hearings as well.

“The new sheet metal armoring project is Hololani’s attempt to work around its failure to obtain approvals for a different seawall and rock revetment from the state earlier this year,” the two groups said in a new release Friday, announcing the lawsuit.

It’s really “a new project,” said Collins. There should be a new environmental assessment.

The groups also challenge whether the new alignment of the sheet metal piles is totally off the state shoreline and on the private Hololani property, he said.

The shoreline hardening efforts are a concern to the plaintiffs because they cause erosion; harm reef ecosystems, fisheries and monk seals; and dissipate beaches leading to loss of access, they said in the news release.

“Kahana Bay was once rimmed with large expanses of sandy beaches,” they said. “As the shoreline has become increasingly hardened, plaintiffs, which include Hawaiian cultural practitioners, observed decreases in limu and changes in fisheries.”

The plaintiffs learned about the Aug. 1 date to start work when the Hololani association alerted neighboring properties about the work, Collins said.

Attempts to reach officials with the Hololani Association of Apartment Owners on Monday afternoon were unsuccessful.