At least 21 structures damaged or destroyed 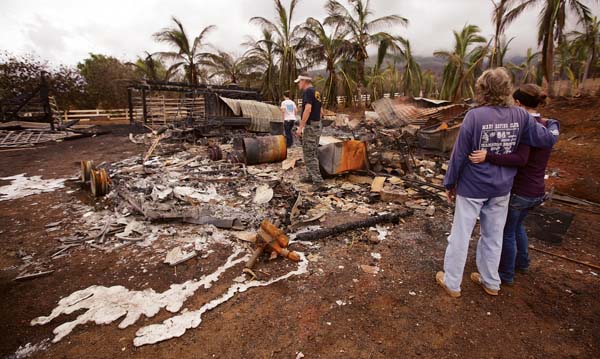 Friends of Puunoa Estates resident Marla Braun-Miller sort through the remains of a barn Saturday morning that was home to 22 horses before a brush fire destroyed it Friday. The horses were found unharmed. -- The Maui News / CHRIS SUGIDONO photo

LAHAINA — More than 50 people lost their homes in Kauaula Valley along with a handful of others near Punakea Loop and Hokiokio Place due to Friday’s raging fires through West Maui, victims and county officials said.

Several families were displaced after about a dozen homes were destroyed in kuleana lands west of Lahaina Stables in the valley. Many victims sought emergency shelter at Lahaina Civic Center, but were later forced to find overnight housing Saturday at churches and other shelters.

“Everybody who lives up there lost their home,” Chardell Naki said by phone from Ka Hale A Ke Ola Homeless Resource Center. “There’s nothing. Only ashes. Everything is burnt to the ground.”

Naki said she evacuated her home around midnight Friday with her husband and their four small children, ages 7, 5, 18 months and 3 months.

“We never get nothing,” she said. 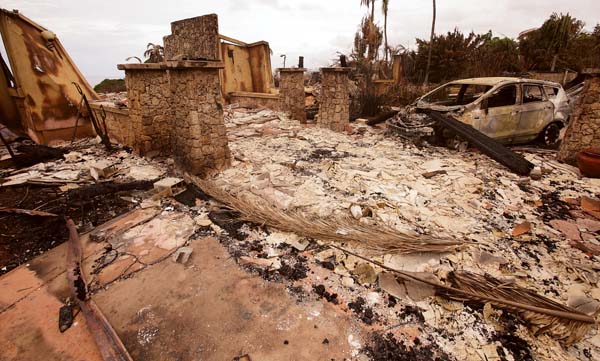 A home on Wili Okai Way is left in ruins Saturday after brush fires swept through West Maui destroying several homes, including a dozen in Kauaula Valley. -- The Maui News / CHRIS SUGIDONO photo

“All we did was get our kids. People lost their cars because they couldn’t find their keys. We came out of that place half-naked, no slippers, no clothes — nothing.”

Naki, a Native Hawaiian, said her family was left with nowhere to go because all of her family also lives in the valley. She said the lands and homes have been passed down for generations, but noted some families were able to find shelter with in-laws and others.

“I was raised in that house,” she said. “My dad built that house when I was 3 years old. My daughters were born and raised there.”

Lahaina resident Sarah Reichert was helping the Naki family and others who lost their homes in the valley. She said the family was among 60 others who checked in with the Red Cross at the civic center.

While not all of the people at the center had lost their homes in the fire, Reichert said everyone at the shelter was forced to leave around 2 p.m. She said community members worked with Red Cross volunteers to find housing for people at Waiola Church and Lahaina Baptist Church. 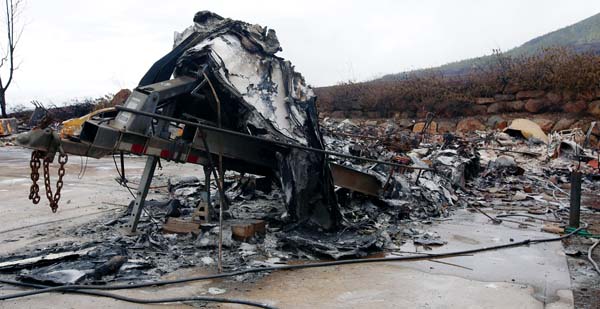 A boat is melted outside a destroyed structure that housed one person on Lau Awa Place in West Maui. -- The Maui News / CHRIS SUGIDONO photo

Na Aikane O Maui Cultural Center also is accepting donations from the public for victims of the fire.

“It’s just astounding what happened,” Reichert said. “The community is the one taking these people in, and the government is not doing one thing to help.”

Naki said she has not talked to many family members, and that “everyone is all over the place.” She said she does not know what they are going to do, but hope they can rebuild their home and go back to the valley.

“There’s a lot of feelings I don’t know how to express,” she said. “We are thankful and grateful that people have been helping us. We are truly blessed.”

Other homes destroyed in the fire included one owned by Pacific Media Group President and Chief Executive Officer Chuck Bergson at the top of Wili Okai Way. Two cars could be seen melted outside the home with the entire structure collapsed and scorched by fire.

Curtis and Stacey Coon stopped by the house Saturday afternoon and said they were friends of Bergson and his wife, Gail, but had not talked to them yet. They were shocked to see the house destroyed.

“I don’t know where they are, but they got to be devastated,” Curtis Coon said.

Coon said he built the house for the couple 10 years ago, and three months ago did work on an entertainment center. He said the house was about 2,500 square feet with a three-car garage and a 600-foot ohana unit.

Other friends visiting the house said the couple was “traumatized,” but declined to comment.

Another home belonging to Gerry and Thelma Farren was left in ashes on Hokiokio Place. Friends in the neighborhood said the couple moved a month ago to Southern California, and they were trying to sell the house.

“By the grace of God they had all their belongings out and moved on to the next phase of their life,” friend Chris Speicher said near the home. “But still they lost a house.”

Many homeowners managed to keep their homes early Friday morning, but they suffered damage and destruction to other parts of their properties.

JoAnne Applegate, who lives on Lau Awa Place, with her husband, Bob, watched their 4,000-square-foot office space and housing unit burst into flames. The couple’s hanai daughter, Malia Poese, was living in the building that also stored all her belongings, her car, a classic car, a motorcycle and hundreds of other mementos and family photos. A 30-foot boat also was melted outside.

“It sounded like explosions,” she said of the fire. “It was unbelievable. When I opened the door to let the cat out, I got hit in the face with a blast of heat like I’ve never felt before.”

Bob Applegate said the couple’s home was completely surrounded by fire at one point, and he pointed to several torched trees just a couple feet from their master bedroom. He said he fought off flames for three hours with a garden hose while trying to dodge large flying embers.

“The reality is I couldn’t give up,” Applegate said. “I thought I had to try. We feel grateful. We lost a whole lot of stuff up there, but we still got the house and nobody got hurt.”

Puunoa Estates resident Marla Braun-Miller also had her home spared along with her 22 horses. She said she had two minutes to free the horses before flames reached the property, which were thankfully in one barn structure due to Hurricane Lane preparations.

“It was scary,” Braun-Miller said Saturday morning. “It was dark, and all you could see was the bright light of the fire. You could feel the heat and breathing was hard in the smoke.”

Braun-Miller and about a dozen friends, family and riders she tutors helped clean the barn area up and build temporary stables for the horses Saturday. She said a vet is scheduled to check the horses and believes the ranch will “recover fine.”

“It was just a relief everybody was OK,” she said.

Among the structures impacted are six near Lahainaluna; 15 near the Launiupoko area that includes Punakea Loop, Hokiokio and Kauaula Valley; one baseyard with heavy equipment and 30 vehicles.

On Friday, at least four homes and a couple of other structures along Lahainaluna Road were destroyed.

Fires in Maalaea and Kaanapali were fully contained, and fires in Lahainaluna and Launiupoko were about 80 percent contained Saturday afternoon, Battalion Chief Michael Werner said. Fire personnel also were mopping up the fire’s makai, Lahainaluna and Launiupoko flanks, while the state Department of Land and Natural Resources Division of Forestry and Wildlife were working on the mauka flank in the Kuia area.

The cause of the fires was still under investigation.