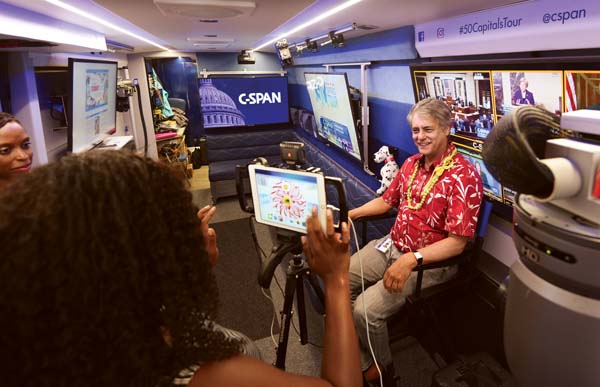 WAILUKU — Under the gray skies of pre-hurricane weather Tuesday morning, the 45-foot C-SPAN bus kicked off its three-day visit to Maui, the latest stop on its nationwide tour.

The bus arrived on Maui after a six-day spin through Oahu. The plan was to stop at schools and historic sites to gather content for a special feature on Hawaii set to air in October.

“Everybody wants to know what’s happening on the news, and watch the news, and now we’re in the news,” Deanna Thyssen, secretary to the county Director of Finance, said aboard the bus Tuesday. “It’s exciting for Maui because nothing really gets over here.”

Since September, the Washington, D.C-based public affairs network has been touring the country as part of its 14-month “50 Capitals Tour,” a celebration of the 25th anniversary of the C-SPAN bus program. Honolulu is the 39th capital the bus has visited, and Des Moines, Iowa, is next, marketing specialist Vanessa Torres said.

The bus parked in front of the Maui County building Tuesday morning, and C-SPAN staff invited elected officials, county workers and passersby aboard to tour the bus and discuss local issues. The air-conditioned interior features 11 tablets where people can access videos of government and community events, take quizzes and learn about C-SPAN, which offers “gavel-to-gavel” coverage of Congress, uninterrupted by commercials or commentary. The bus also swung by the Queen Ka’ahumanu Center on Tuesday afternoon for public tours. 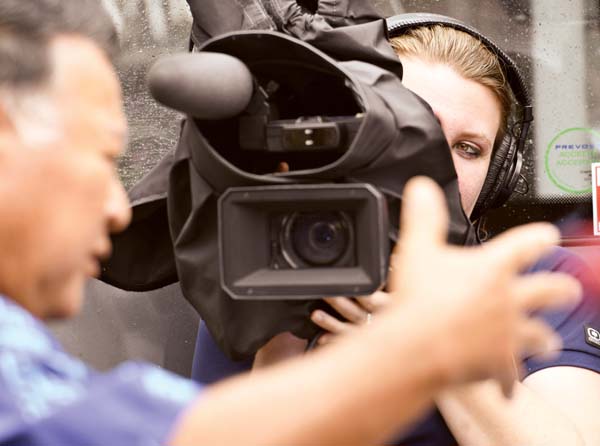 C-SPAN camerawoman Amanda Fortner protects her camera from the rain as she films Mayor Alan Arakawa while he is interviewed outside the C-SPAN bus Tuesday morning in Wailuku.

However, stops at Baldwin High School and the University of Hawaii Maui College scheduled for today were canceled after the state Department of Education closed schools in anticipation of Hurricane Lane. The effects of the hurricane were expected to reach Maui County as early as tonight.

Torres said she wasn’t sure how the hurricane would affect the bus tour, or whether the bus would be shipped back early.

“We’ve just kind of been rolling with it,” Torres said.

Mayor Alan Arakawa was one of the first aboard Tuesday morning, chatting with C-SPAN staff about Maui issues and Hawaii’s history of immigration.

“It’s important to realize that we are a very, very mixed community — multicultural in every respect,” Arakawa said later. “And that’s going to become the norm for the world.”

The mayor said he thought it would be great for Maui to get some national attention when the feature airs in October.

“I think it’ll be important that people see what’s real in Hawaii, how we really live, rather than just the rumors,” he said. “Some people just still think that all the girls have grass skirts and that we live in grass huts.”

“You’re so isolated over here that you have to watch the news to find out what’s going on, and when you turn on C-SPAN, for example, you can find out exactly what’s going on in the government,” Terri Johnson said, adding that her husband watches the network “quite a bit.”

Gary Johnson said he likes C-SPAN “for direct input without all the B.S.” He thinks commercialization has affected the coverage of many big-name networks and thinks the solution is to “pull the plug, shut their cameras off” and get back to independent coverage.

“Certainly spend too much time trying to decipher what is right and what is wrong,” he said.

Torres said C-SPAN’s coverage is unique in that aspect. The network doesn’t cover breaking news, solely public affairs — “Congress from start to finish, committee meetings, hearings and briefings.” It’s funded by cable and satellite television providers, not the government, and aims to be nonpartisan, balancing out events from one party with coverage of another.

“We’re that fly-on-the-wall perspective,” Torres said. “You don’t have to worry about hearing other opinions. You get to watch everything firsthand and then figure out your own opinion.”

C-SPAN’s video library has accumulated more than 245,000 hours of coverage since 1987, and the videos come with transcripts, a useful feature for students, journalists and researchers.

Marketing representative Shannon Augustus said some of the issues that Oahu residents brought up included education, homelessness and the cost of living. She said she’s noticed common themes in many states, which, “in my opinion makes us feel a little bit more united, because everyone’s concerned about education and children, and everyone’s concerned about cost of living and the roads.”

Today, the bus will visit the Maui Economic Development Board and the Alexander & Baldwin Sugar Museum. On Thursday, the bus was expected to visit Lahainaluna High School (depending on whether it’s open), the Kiwanis Club of Maui and the Iao Valley State Monument.

Footage from the museum and Iao Valley will be used as part of C-SPAN’s ongoing “Cities Tour. The program featuring Hawaii will air on all three C-SPAN networks Oct. 6-7. C-SPAN, which is provided by Spectrum in Hawaii as a commercial-free public service, can be seen on Channel 45, with C-SPAN2 on Channel 47 and C-SPAN3 on Channel 46, and on the web at C-SPAN.org.

The bus is scheduled to return to Oahu Thursday through Saturday for its final stops in the islands.