The new Kihei Charter School campus in the Maui Research & Technology Park is expected to open in early September. School officials had hoped to have the new campus open in time for the beginning of the school year, but there have been delays, including the installation of an elevator. The Maui News / MATTHEW THAYER photos

The public charter school with kindergarten to 12th grades originally had planned to open its new campus in the Maui Research & Technology Park in time for the start of the new school year earlier this month.

But a “couple supply issues” may push the opening to early September, said Gene Zarro, chief executive officer of the South Maui Learning Ohana, the founding organization for the school. F&H Construction is building the 63,000-square-foot building that will house all of the school’s nearly 700 students.

“There’s a couple issues out of everyone’s control, which is typical for construction,” Zarro said Thursday afternoon at the school’s offices in the Lipoa Center. “We’re waiting on the elevator, which is a serious piece of equipment because you can’t have a certificate of occupancy without it operational. 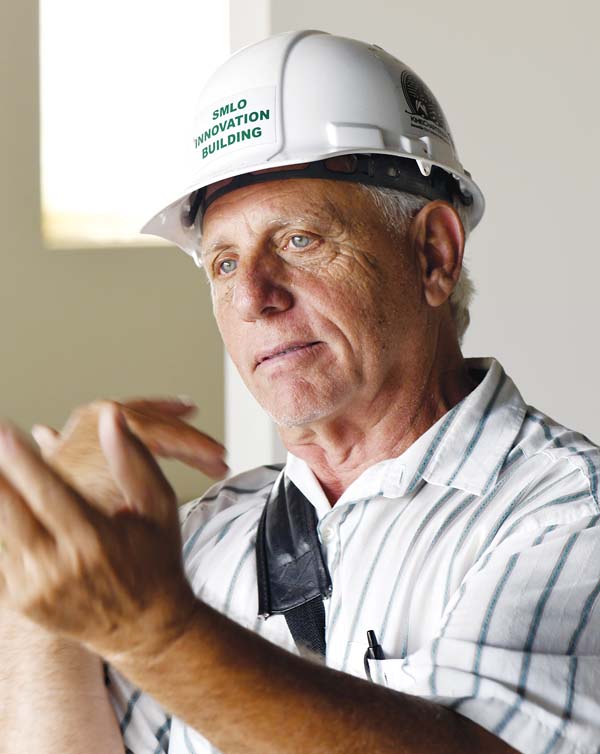 The school’s parking lot, drip irrigation and general structure have been completed, with roof installation and painting underway, Zarro said. Over 24 trees have been planted and bathroom fixtures, such as toilets also are being installed.

While work continues on the new campus, teachers and staff are making do with limited face time with students and classes held at community centers, churches and other locations. School started Aug. 6.

“It’s hard to pay two mortgages,” Zarro said. “For the parents who have been with us, this is nothing new, and they’re looking forward to the big campus, and more importantly ownership of the campus.” 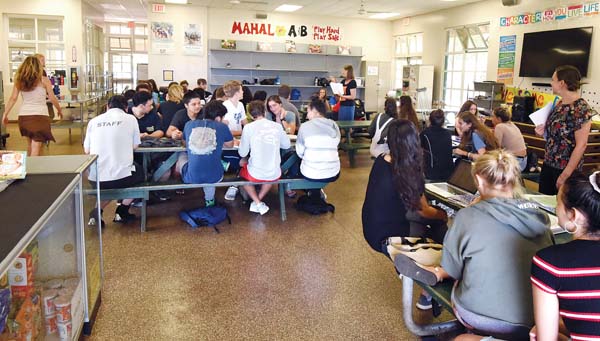 Among the facilities utilized by Kihei Charter School as it awaits the completion of its new campus is the Kihei Youth Center, shown on Thursday.

Renting space at other buildings has been an added cost, but school officials prepared for it, Zarro said. He added that the school has “enough financial security to do what’s best for the families.”

“We always utilize our community partners because school cannot be contained within four walls,” he said. “It is going along very nicely and smoothly for us. It wasn’t a matter of scramble or panic, it was a matter of schedule and how to utilize more than anything.”

Paul Corarito, business manager of St. Theresa, said Thursday the school had contacted the church about returning temporarily for two weeks of classes. He said the pastor is in favor of assisting the school but needs approval from the Catholic diocese.

“We want to assist if we can,” Corarito said. “Plus, it serves the community and that’s what we’re trying to do.” 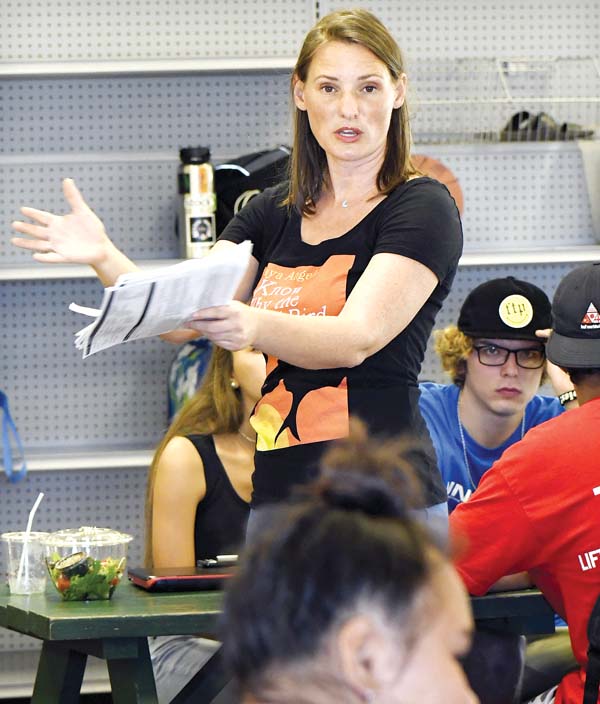 “They chose not to give it to us,” Zarro said. “There’s no real reason. It seems to be acceptable to underfund charter schools. Six or seven years ago, we were getting $8,300 per student, but then it was cut down to $5,500 and we clawed our way back to $7,200. We would be in really good shape if they would up us that way.”

Another adjustment families are facing due to the limited space is with the daily school schedule. Parents visit the school’s website for the latest class times, dates and locations for each grade level.

On Thursday, 9th- and 11th-graders had virtual school online, with 10th-graders on a trip to Hana and 12th-graders having class at the Kihei Youth Center. In-person classes are held in the morning and afternoon for two hours and 45 minutes each to allow every student face-to-face instruction.

Kihei Charter teacher Megan Terry, who was holding her class Thursday afternoon at the youth center, said her students are only getting two days of classroom teaching but have been “pretty good at rising to the occasion.”

She said the school has always emphasized self-directed learning and group projects, which has helped students in the transition.

“I’ve been surprised at how everyone has pulled together and seen the big picture vision that this is just temporary,” Terry said.

Amber Sampson, the Kihei charter’s first school counselor added this year, said some parents have expressed concerns and displeasure with the transition but many have been supportive and even brought drinks and cookies to the office. She noted that her focus has been on making sure all the students feel supported and have a positive learning environment.

“I think they (parents) know that this is a really good school so they’re sticking with us through the transition,” Sampson said. “This isn’t anybody’s ideal situation and nobody is at fault. We’re just trying to make the best with what we have.”

Parents picking up their children at the Lipoa Center on Thursday were generally supportive and understanding of the school’s rotating schedule and classroom locations. Parents said they are used to being more flexible than other public school parents due to the charter school’s hybrid-virtual program.

Kihei parent Holly Reynolds, who was picking up her 5-year-old Urijah, said the timing is “funky” and can see how the temporary school schedule can be inconvenient for some parents. She said it is easier for her, though, due to the flexibility of her job as a bookkeeper and the fact that she graduated from the school.

“This is pretty much the same thing I went through,” Reynolds said. “It’s just a transition, and we know there’s a light at the end of the tunnel. Everyone seems to be dealing with it, and we know it’ll change eventually so it’s worth it.

“When you look at the educational portion of it, you’ll deal with anything to get your kid into a good school.”

Parent Kris Jolls, who was with his daughters in 1st and 5th grade, said he is looking forward to his kids being at school for a full day but has not minded the adjustment period. He also understood that other parents may be a little frustrated and have been forced to carpool their children home in the middle of the workday.

“With a charter school like this, the whole priority has been having a parent available during and after school,” Jolls said. “I think a lot of people are used to that.”

Kihei Charter senior Gracie Ugrinich said it’s been a bit of an adjustment but noted that students learn to be versatile and flexible because of the freedom they are given over their schedules. Ugrinich said she spends most her time taking classes at University of Hawaii Maui College.

“I’m just excited we’re getting a new building because we’ve been promised one since 7th grade,” she said.

Ugrinich said she is most looking forward to the elevator at the new campus after falling down stairs at the old high school two years ago. She suffered serious injuries to her spine, hips, knees and ankles.

“It’s going to be nice to have a new facility overall because it’s going to be a lot cleaner and a lot more comfortable and high tech,” she said. “We’re going to be the first class to graduate from there so we’re all stoked.”