Rain from Lane washes out access to Haiku cul-de-sac 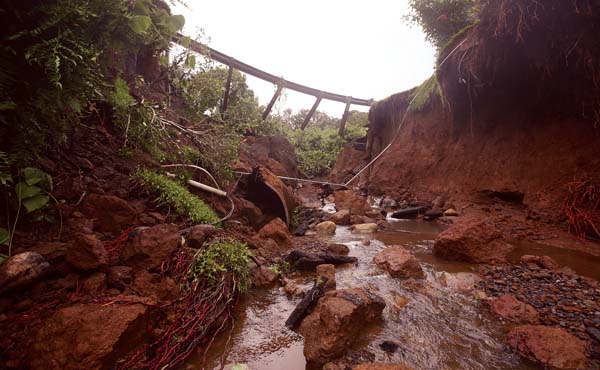 HAIKU — Three Haiku homes in a cul-de-sac remained cut off Tuesday by a 13-foot-deep gully carved out by “a tremendous amount of water” last week as Hurricane Lane passed by Maui, the county Public Works Department director said.

Heavy rains Friday flooded and overwhelmed an aging culvert and ripped out the road and access to the Puu Way cul-de-sac, said Public Works Director David Goode on Tuesday. The gap was as much as 30 feet across and 80 feet long.

The road is impassible by foot or car, so residents must hike up and down the side of the gully that used to be the road.

No one appeared to be home in the cul-de-sac Tuesday morning as crews worked to restore power to units. One gated house sits across the collapsed road, while the other two straddle a steep uphill driveway.

A handful of trucks and minivans could be seen parked in the driveways, and some of them are rental cars, a county official said. All the properties are a little over 2 acres, and two of the homes appeared to be owned by Haiku residents, according to county property tax records. 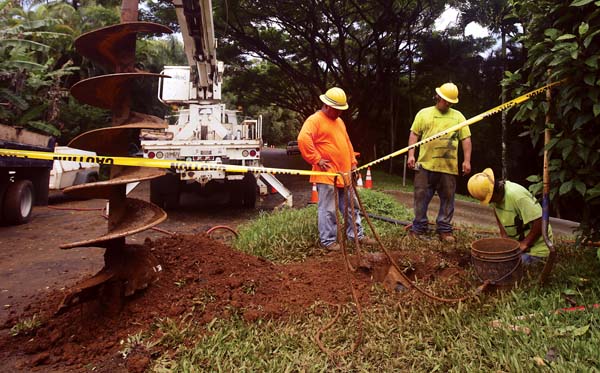 Another homeowner is Deutsche International Trust II, which lists a Salt Lake City mailing address. The total assessed value of this property and home was $2.7 million.

Alan Chung of Na’auao Traffic Control was managing safety around the damaged area and worksite Tuesday. He said a female resident had stopped by her home earlier Tuesday morning and talked about trying to transport a generator across the road.

The county Tuesday was mulling ways to restore access for residents. The county cut a path along the side of the gully, but it is muddy from frequent rains.

Goode called repairs and re-establishing access to the residents an engineering “challenge.” Temporary options are being considered, including a walkway and temporary bridge over the gully.

The temporary bridge would be similar to ones used in Hana during bridge repairs, Goode said. The county uses Acrow Bridge, a product made by an engineering firm specializing in prefabricated modular steel bridges. 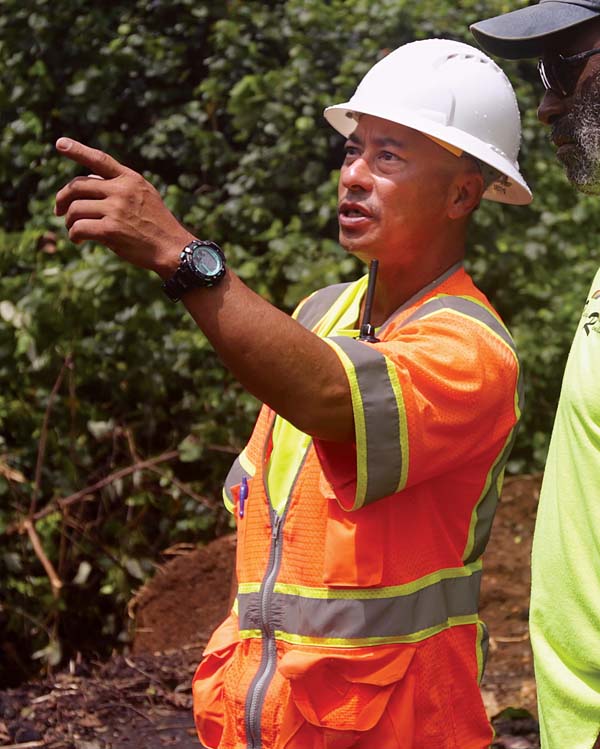 Alan Chung of Na‘auao Traffic Control talks to a worker Tuesday morning on the collapsed Puu Way in Haiku.

The pedestrian bridge could be made out of 40-foot-long glulam beams, Goode said, though he did not know if the beams were long enough.

It will take at least two to three months before work can begin on a permanent fix, but the temporary bridge could be put up within a month, Goode said.

The permanent replacement will be expensive, between $2 million to $2.5 million, according to comments during a County Council meeting Tuesday. Goode is hoping to get the Federal Emergency Management Agency to cover at least 75 percent of the construction cost.

The two 72-inch-diameter corrugated drainage pipes under the road had reached the end of their useful life, and the large volume of water caused them to fail, Goode said. The county plans to build a culvert with more capacity and with better materials.

At Waha Place downstream, two 96-inch culverts were installed four years ago. He said residents still were able to transverse the roadway and that the culvert “seemed to do OK” in the storm.

The new culverts, which still need to be designed, could be made with concrete on Maui or flown in from off-island.

“That is going to take time,” Goode said of the repair job. “Our big challenge is getting the money and getting the plans.”

In explaining the engineering challenge, Goode compared the Haiku situation to the washout of a culvert bridge in Maalaea at the south end of Hauoli Street in 2011. That bridge was rebuilt in two weeks with pipes and specs already in hand, he said.

“This is way bigger,” he said. “This is 10 times bigger. This is major dollars.”

Maui Electric Co. and Aina Excavation & Grading workers could be seen Tuesday morning working to restore power to the homes and drilling holes for temporary poles for power lines.

MECO reported that the four customers in the Haiku cul-de-sac had power restored at about 7:15 p.m. Tuesday.

The waterlines to the homes have been fixed, Goode said.

Alan Chung of Na‘auao Traffic Control talks to a worker Tuesday morning on the collapsed Puu Way in Haiku.

The master-planned Waikapu Country Town is located within and around the Maui Tropical Plantation. The project would include 1,433 residential and 146 ohana units, commercial space, an elementary school and more than 1,000 acres of agricultural land.