Both candidates want to counter the stereotypes and reach more voters 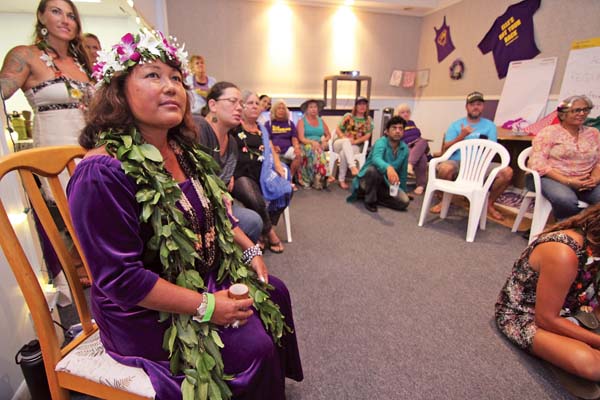 Council Member Elle Cochran awaits the results of the third printout with supporters at her Wailuku campaign headquarters. Cochran finished second and will advance to the general election against Mike Victorino. The Maui News / COLLEEN UECHI photos

Mayoral candidates Elle Cochran and Mike Victorino performed best in their usual stronghold districts, but both candidates said they’re trying to shake the stereotypes that have both helped and hurt their images in the lead-up to the general election.

Victorino was the mayoral front-runner in Saturday’s primary election, finishing with 13,541 votes, or 39.8 percent, followed by Cochran with 10,428 votes, or 30.6 percent, according to final numbers printed at 3 a.m. Sunday. County Council Member Don Guzman, who kept Cochran on edge most of the night, finished third with 8,184 votes, or 24 percent.

Victorino’s best precinct was Iao Intermediate, where he drew 1,241 in-person and absentee votes. He easily guessed which districts he’d done the best in during an interview Sunday afternoon.

“I think traditionally I’ve done well in those areas,” said Victorino, who represented Wailuku, Waihee and Waikapu on the Maui County Council from 2007 to 2016. 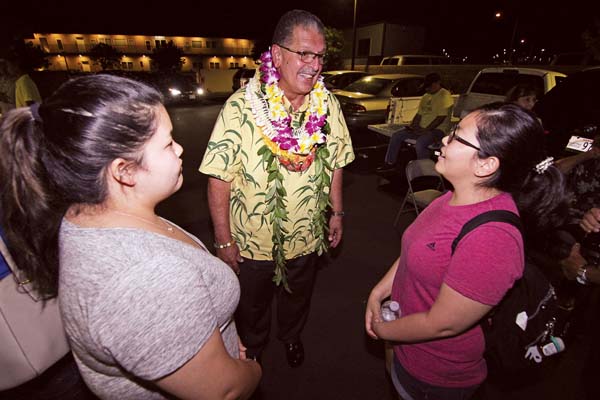 Victorino thought maybe the reason he hadn’t done as well in other districts, particularly South and East Maui, was because of his “environmental accomplishments and priorities.”

“I think these are people that are more environmentally inclined,” Victorino said. “And I’m still perceived in other areas as more in favor of the hospitality industry and big ag, which is absolutely not correct. I support our hospitality industry, definitely, and we need to continue to improve it, to make sure we don’t tax our resources.”

When asked if he felt more pigeonholed than in past elections, Victorino said “absolutely.” But he said the solution was just to stick to his campaign strategy.

“You know when you get caught in the undertow, what do they tell you to do?” he asked. “Go with the tide, and when it’s not as strong or you get out of it, then you turn and head to the beach. I go with the tide with my message of working together and building affordable housing . . . and not getting distracted by those that want to pigeonhole me. I try to stay away from polarization.”

Victorino believes one area of common ground is his support for diversified agriculture and growing sustainable crops for biofuel as well as to feed the community. He said he wants to support organic and traditional farmers. 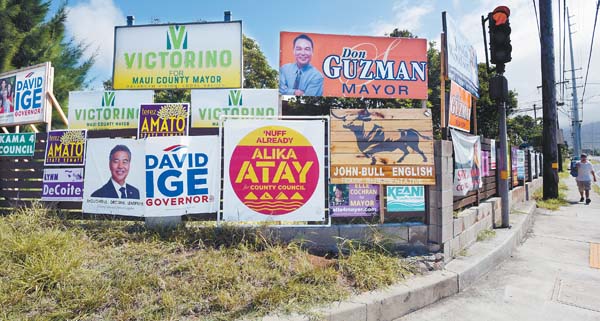 Campaign signs cover a fence at the corner of Puunene and Wakea avenues in Kahului in this photo taken June 5. With the primary election over, some of these signs will be coming down as candidates prepare for the Nov. 6 general election. The Maui News / MATTHEW THAYER photo

“I will do everything as the mayor to make those industries grow and thrive,” he said.

Victorino’s problems are Cochran’s in reverse, as she tries to shake a reputation as an “anti-everything” environmentalist.

“Actually, I feel like I’m breaking out of that pigeonhole,” said Cochran, who’s represented West Maui on the council since 2011. “I feel like I’ve really reached out and branched out to a lot of broader-based demographics of the community on many levels. From my first campaign, I was extremely pigeonholed and looked at one-sided, just totally anti-development, pro-environment, just anti-everything.”

Cochran said once people sit down and speak with her, they realize she’s “supportive of many points of views.”

“I’m pro-good development,” she said. “Of course my underlying point of my decision-making is the protection of the culture, protection of the environment, yes, but not so far to the extreme that it’s like, oh my God, don’t put a shovel in that dirt ever. There’s an appropriate time and place for everything.”

Cochran said she believes she did well in West and South Maui not only because she’s from Lahaina, but also because the two areas have similar demographics as resort areas facing high-end development.

She also said she spent time visiting East Maui communities. Cochran’s biggest bastion of support was at the Haiku Community Center, where she received a total of 1,282 in-person and absentee votes. Cochran thought she may not have done as well in Central Maui because of the unions in the area — many of whom endorsed Victorino — and the retired workers who relied on those unions.

“Typically that’s why I don’t do as well, I believe, in the central area, because of the stronghold of your union-type people, which is fine,” she said. “They’re going to be loyal and be very grateful for the people who provided them their jobs all their lives.”

Cochran said she was a union member when she worked in the hotel industry and said that every election she tries to highlight her background as a “local resident who grew up through the plantation era” to working-class parents who owned a small business.

With the Nov. 6 general election ahead, Victorino said he planned to spend more time in his weaker districts and attend more functions, including forums and debates. Both he and Cochran were happy with the higher voter turnout — still not ideal, but better than before. This year’s primary election drew 34,073 voters, or 36.2 percent of the 94,194 registered voters in Maui County. It’s an improvement over the 2016 primary election, which drew 26,993 voters, or 29.6 percent, as well as the 2014 primary, which saw 28,337 voters, or 33.1 percent.

Council Member Elle Cochran awaits the results of the third printout with supporters at her Wailuku campaign headquarters. Cochran finished second and will advance to the general election against Mike Victorino. The Maui News / COLLEEN UECHI photos

King Kekaulike’s Trey Hunter celebrates his long kick off return touchdown earlier this month against McKinley. Hunter is expected to be a contributor for Na Alii.

Campaign signs cover a fence at the corner of Puunene and Wakea avenues in Kahului in this photo taken June 5. With the primary election over, some of these signs will be coming down as candidates prepare for the Nov. 6 general election. The Maui News / MATTHEW THAYER photo