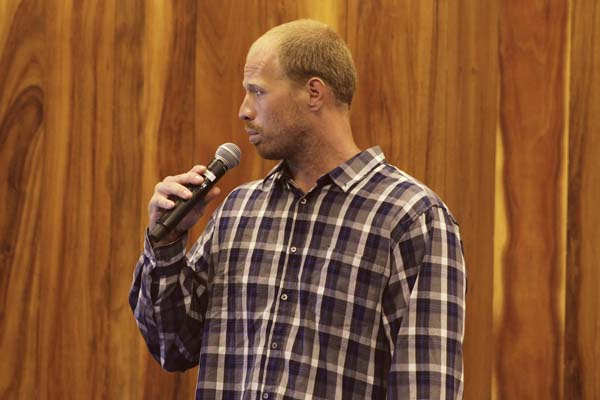 Justin Kekoa Kekiwi, a lineal descendant of Honua‘ula moku, gives a presentation on a project in Honua‘ula that he and other residents say did not undergo a proper archaeological review and was not brought to the community before it began. Kekiwi spoke before the County Council Infrastructure and Environmental Management Committee on Monday. The Maui News / COLLEEN UECHI photo

WAILUKU — Residents, County Council members and the Office of Hawaiian Affairs on Monday criticized a project in Honua’ula that residents say did not undergo proper archaeological review and only came to light when the process of grading and grubbing began.

“Our main questions are, was all the work that was done in Mo’omuku properly permitted?” asked Justin Kekiwi, a lineal descendant of Honua’ula moku, who is leading efforts to bring the project’s plans to light. “And is this project being segmented to avoid proper review processes?”

Mo’omuku is the traditional ahupuaa place name of the project area, Kekiwi said during a presentation to the County Council Infrastructure and Environmental Management Committee on Monday. The parcels in question are located mauka of Makena State Park and the ‘Ahihi-Kina’u Natural Area Reserve. Once owned by Japan Grand Prix in the 1980s, the 150-acre parcel was eventually divided among the current owners — Evans Holdings Inc.; Mo’oloa Ranch LLC; Kanahena Inc.; Uhaloa LLC; and Olsen Trust LLC — all of whom are listed under the same contact address of Alakea Street, Suite 220, Honolulu.

In 2015, according to county Planning Department documents, Evans Holdings got a special management area exemption to build a $1.8 million “farm dwelling,” a single-family residence within 7,500 square feet, on one of its parcels. The department also issued SMA minor permits for a $22,000 gate (later updated to $36,000) and a $220,000 brine disposal well in 2016 and 2017. Other plans included a paved road down the mountainside that eventually caught the eye of residents.

Kekiwi said the community started to notice the increasing traffic last summer. Around June 2017, Linda Stiles, who lives about a half a mile away from the project site, said she started hearing dump trucks rumbling through the area several times a day. She went to the site and saw workers digging trenches and tearing down rock walls. When she reached out to the county Public Works Department, they said in an emailed response that the work had taken place under two grading permits.

The project site is located mauka of Makena State Beach and the ‘Ahihi Kina‘u Natural Area Reserve. Once owned by Japan Grand Prix, the 150-acre property was eventually divided among several owners, who all have the same Honolulu contact address. A farm dwelling and conservation area for wili wili and deer have been proposed for the northernmost parcel. Other plans have included a brine injection well, a gate and a paved road down the middle of the parcels. Moomuku project: graphic courtesy of Justin Kekiwi

Jacob Adolpho, a survey assistant who was assigned to the project around May 2017, said there has been “significant damage up there” to heiau and shrines that were listed on the state historic roster.

“The fact is we’re looking down the barrel of something that could be extremely dangerous to our community,” he told the committee. “Those sites and those areas are important to be preserved for the lineal descendants of those areas.”

Kekiwi, chair of the Iwi Committee for Aha Moku Honua’ula, said the community met with the Planning Department in January and discovered that “six of the seven parcels where work occurred did not have SMA permits.” Kekiwi said the county Public Works Department issued a grading permit before the state Historic Preservation Division had completed its review.

After pressure from the community and OHA, the Public Works Department issued a stop-work order in May. Public Works Director David Goode initially told the committee Monday that he believed the state had given the all-clear and that the department had lifted the stop-work order. However, when later questioned by the committee, he said he wasn’t sure and would have to double-check with the department.

“I know very little about this project,” Goode said. “We issue a couple hundred grading permits a year, as you probably remember. At least 1,800 building permits per year.” 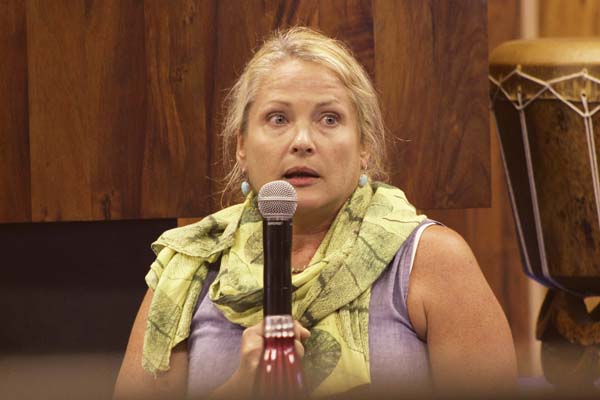 Lauren Morawski, compliance archaeologist for the Office of Hawaiian Affairs, said project contractors claimed they consulted with the community and OHA, but OHA has no record of the project reports being sent to its office. The Maui News / COLLEEN UECHI photo

OHA compliance archaeologist Lauren Morawski also said it appeared that the historic preservation review process wasn’t complete before work began on the site. She said that the project archaeologist “was asked on multiple occasions to do consultation with the community,” and that the project’s final report claimed consultation took place and that reports had been sent to OHA for review. Morawski checked with OHA’s intake specialist and the manager of the compliance department and combed OHA’s databases.

“Nothing came to our office about this project, so clearly there’s a problem with the report stating that they did their consultation when in fact they did not,” Morawski said.

She said that OHA wrote a letter to the county and state asking that the review process be reopened.

“This contractor has written back and said that this is unprecedented to reopen the historic preservation review process,” Morawski said. “But I think it’s also unprecedented that people lie in their reports.

. . . We’re at sort of an impasse now as to whether or not this project proponent is going to reopen the process, which it needs to go all the way back to the beginning.”

In addition to the apparent lack of permits, Kekiwi said the community was also concerned about the environmental impacts. He said it appears the developer is “piecemealing” the project to avoid a broader, more stringent review.

Robin Knox, an environmental scientist who specializes in water quality, said that the waters below the project site are some of the cleanest along Maui’s leeward coast. She and other testifiers worried about the impacts of a brine injection well and a paved road, which Kekiwi called “one highway for silt runoff.”

Kekiwi and Morawski also questioned the farm plan proposed by Evans Holdings, which OHA obtained from the Planning Department through a Freedom of Information Act request. It calls for keeping 51 percent of the 29.3-acre parcel as “agricultural land conservation” to serve as a habitat restoration for wili wili trees and for the deer population. Kekiwi said the plan didn’t make sense, since the deer would likely eat the wili wili.

Morawski said her office sees this kind of pattern “all the time. . . . This piecemealing of projects. This avoidance of talking to people in the community.”

Because it did not have quorum to start the meeting, the committee had to defer the issue. Committee Chairwoman Elle Cochran said the issue left “a lot of question marks for sure, a lot of disappointment and frustration.” Kelly King, whose residency district is South Maui, said that she was “shellshocked by this whole thing and how this has been allowed to go so far.” Riki Hokama, who holds the Lanai residency seat, wondered if the council could send the project back to the Maui Planning Commission.

Deputy Corporation Counsel Richelle Thompson said that “normally you would look at whether they were not compliant with an SMA permit, or whether some of the information that they gave at the time that they were seeking the permit was not correct or wasn’t complete — and that might offer a window into reopening that process.”

Evans Holdings could not be reached for immediate comment Monday evening.