Residents grateful for the generosity shown from across the island 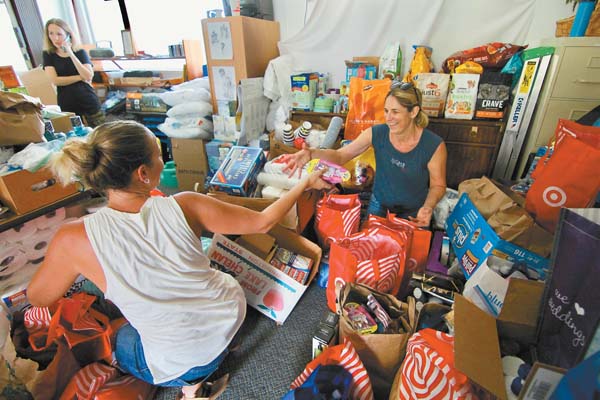 LAHAINA — Just two days after a wind-whipped brush fire burned down their homes, Kauaula Valley residents are gearing up to rebuild.

Volunteers spent the weekend cleaning up the properties, while donation centers asked for tents, generators and other camping supplies to allow residents to return to their land while their homes are being rebuilt.

“We’ve lived through the wind, the fire, everything,” said Kauaula Valley resident Tiara Ueki, who lost her home in the fire. “We’re not going to run away from it. I’m not afraid to rebuild, and I think all the families would agree with me that they’re not afraid.”

On Friday, firefighters battled three brush fires from Maalaea to Kaanapali that burned more than 2,000 acres and destroyed at least 21 structures and 27 vehicles, according to the Maui Fire Department’s initial count. Dozens of displaced families flocked to shelter at the Lahaina Civic Center and later to churches, relatives’ homes and the Ka Hale A Ke Ola Homeless Resource Center in Lahaina.

“We will work with FEMA to do whatever we can,” county spokes-man Rod Antone said. “It’s a little complicated because we may never get confirmation that this is caused by the storm, but it was definitely complicated by the storm because of the swirling winds while they were trying to get it under control.” 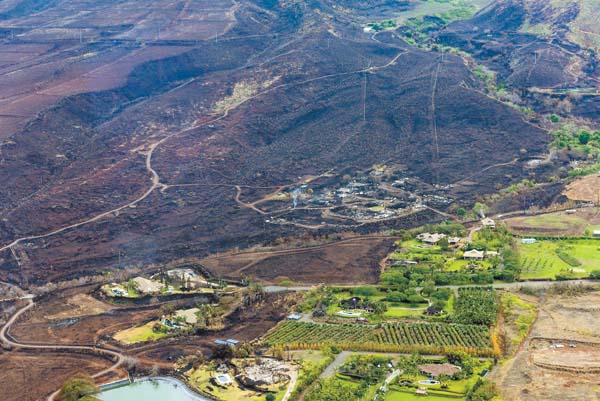 An aerial view of the damage caused by the fires in Pumana and Kaanapali is recorded during a damage assessment Sunday in this photo provided by the County of Maui. Ryan Piros photo

Monique Yamashita, executive director of Ka Hale A Ke Ola, said that the facility provided four units to four families. The fire came right up to the fence surrounding the property, but aside from a handful of palm trees and the corner of the roof, most of the buildings were spared. Yamashita said 149 homeless residents at the shelter and 150 people living full time in the affordable housing on property had to be evacuated.

“We were prepared for the hurricane in case any walk-ins came in,” Yamashita said. “No one knew that the fire was actually going to be the biggest crisis that we were going to have to deal with.”

Yamashita said the families displaced by the fire “will be able to stay as long as they need to.” Ka Hale A Ke Ola plans to offer them such services as rental assistance, case management and getting personal documents that were destroyed in the blaze back in order.

Lyndell Naki, who’s lived in Kauaula Valley for 37 years, said her unit at Ka Hale A Ke Ola overlooks the land where her home once stood. Naki said she was “pouring crying” Saturday night.

“I was looking up, and me and my husband was buss’ crying because we can see my house,” she said. 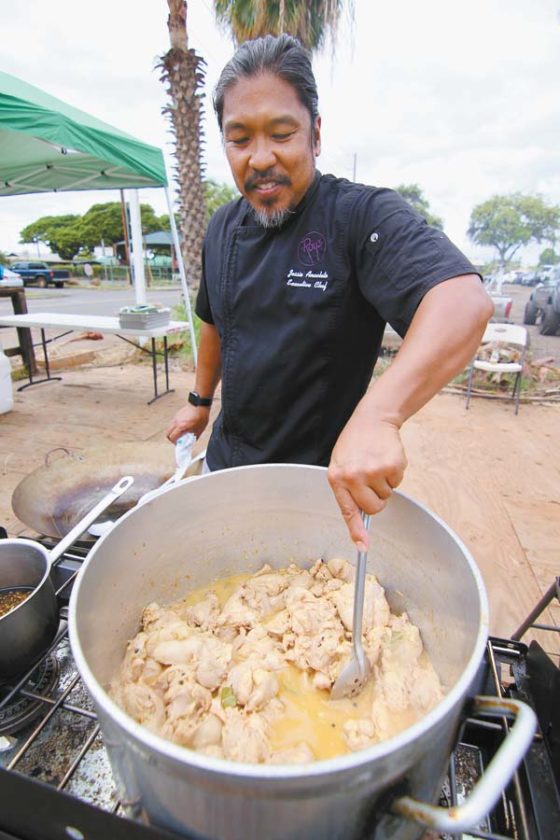 Naki was sleeping when the fire began and said her dogs’ barking woke her up. She and her three sisters lost their homes and weren’t able to save the dogs who alerted Naki.

“We’re still emotional about it because we lost everything,” sister Carol Kalehuawehe said.

Kaleo Nacua-Costa, who’s lived in the valley his whole life, said that many family members were already back in the valley.

“We’ve got lumber and whatnot, and we’re going to rebuild,” Nacua-Costa said. “We’re coming together, being unified. We’ve got to stay strong in times like this.”

Over the weekend, community members flocked to donation centers with clothing, bedding, food and water, while a Facebook fundraiser drew nearly $88,000 in donations by Sunday night. 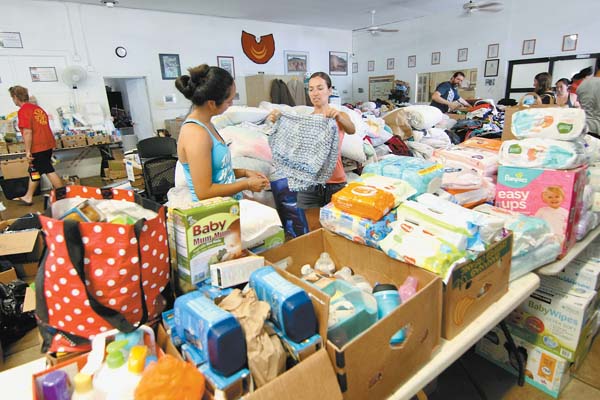 At Na Aikane ‘O Maui Cultural Center in Lahaina, the outpouring of donations included $7,000 to $8,000 worth of raw building materials, said Ke’eaumoku Kapu, who lives at the top of Kauaula Valley and said his family’s homes were spared. He said the families are asking for donations of 2- to 3-inch PVC pipe to help rebuild 4,000 feet of water lines destroyed in the fire.

Kapu said his cousin suffered third-degree burns in the flames — the lone reported injury thus far. He said she was released Saturday night from Maui Memorial Medical Center and was “doing good” and already back up at her property. For families, “the most important priority is for them to be on the land,” Kapu said.

“We get some families that come down, they load up the food in boxes and they take them up,” he said. “Then we get crews up in the mountains stay working and clearing the land right now. We get two machines helping move a lot of the burned cars. There’s a lot of burned cars.”

Ueki said that “everyone’s just going to rebuild where their foundation is.”

“We were all trying to see if we could save the foundations and just build on it, but a lot of them are cracked,” she said. “So for safety . . . we’re just going to rebuild.” 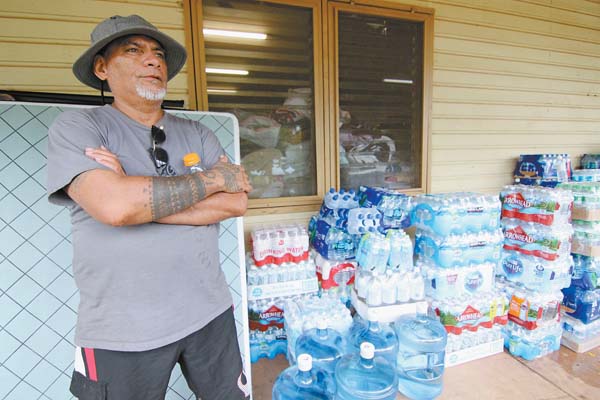 “I think the kids are taking it the hardest,” she said. “Right now just the whole community is amazing. Not just Lahaina, but the whole (of) Maui. They’re coming together to put all of this ease on the families, where they’re trying to organize the clean-up, the rebuild and get it up for all the families to be comfortable again and start their life again.”

At Waiola Church in Lahaina, donations started arriving while the fires were still burning Friday night. Piles of donations packed one of the church’s rooms Sunday morning, which Lahaina resident Maria Lindz said was just a quarter of the donations. On the church lawn, volunteers sorted clothing into boxes.

“We have mountains of items coming in,” said Lindz, who was helping to organize efforts at the church. “It’s unbelievable. The generosity of the community has been incredible.”

Lindz said that the donations that people need most now are money and gift cards to places like grocery and hardware stores; camping supplies such as family-size tents, tarps, generators, lanterns, coolers and propane tanks; tools and shovels; waterproof storage containers; baby supplies such as diapers and formula; and prepaid cellphones.

For more information or to donate, search “Lahaina Strong” on Facebook or the “Lahaina Strong Fundraiser” page at facebook.com/donate/220520352147861/. Lindz said donations will go toward a Bank of Hawaii account to be distributed amongst affected families.

A workday was also organized for 9 a.m. today at Lahainaluna High School cafeteria. The school will be closed today due to the hurricane and fire. Organizers asked volunteers to bring buckets, cleaning supplies and trucks to help clean out the ash and debris so students can return Tuesday.