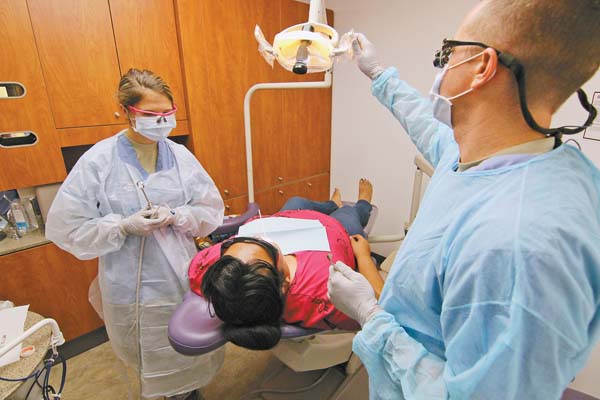 “We could not have done what we did as efficiently and effectively without all the volunteers from the community,” Navy Lt. Mark Bolen said Sunday morning at the Central Maui clinic, held at the University of Hawaii Maui College. “It’s been an incredibly humbling experience . . . in how much the people have thanked us and been so patient.”

Bolen, the grandson of a Navy veteran and Pearl Harbor survivor, said that people had been bringing by food all week to feed the military personnel, many of whom double as doctors, dentists and optometrists. No sooner had Bolen spoken than another woman — a dental patient who’d come by earlier — walked up with trays of banana bread and chicken.

More than 350 soldiers, sailors, airmen and Marines came to participate in the clinics, which last took place in Maui County in 2013. The event serves a dual purpose — allowing military service members to keep up their medical and field training while offering health services to the community. Patients were served on a first-come, first-served basis, and no insurance, proof of income, residency or photo identification was required. 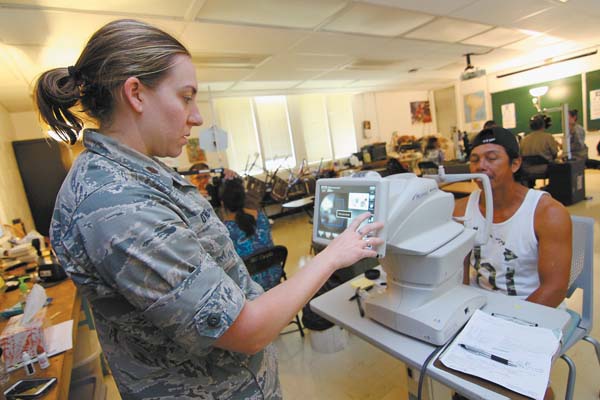 Air Force Maj. Marcy O’Neil uses a retinal camera to take a photo of the back of Alex Tindoc’s eye at the optometry station Sunday morning.

Air Force Capt. Marcy O’Neil said that this was the first year the clinics used an electronic prescription email service, which sends eyeglass prescriptions to the lab in real time. While it slowed the process down somewhat for in-person patients, it allowed the lab to start working on orders for eyeglasses right away, a benefit for more remote clinic locations like Hana.

“It’s really refreshing that we’ve been able to help the community out and help with eye needs as much as possible,” said O’Neil, an optometrist who used to do similar work with Indian Health Services in the villages of Nome, Alaska, every month.

She is currently stationed in Baltimore, Md., but plans to move back to Nome soon.

“This is an normal day in the life for me,” O’Neil said in the low-lit university building where the eye exams were taking place. “It’s kind of my passion and my calling.”