Ag program for keiki gets growing 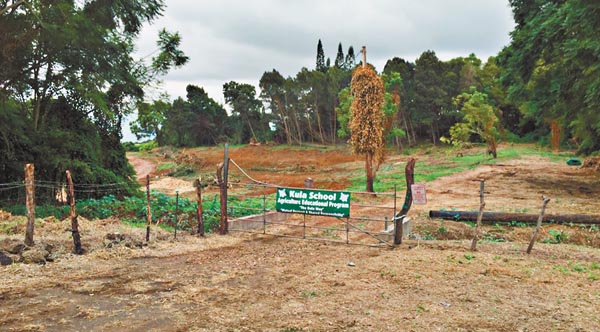 Kula Elementary School will kick off its agricultural science program today at the 5-acre site where the old Keokea School once stood. The program aims to teach students the business and science behind farming, as well as connect students more to the community. Students will work with livestock and grow crops to sell in local stores. Photo courtesy of Chris Bachaus

As a kid, Justin Teixeira first became interested in farming while helping his grandmother plant orchids in her garden.

Now a commercial farmer who grows flowers and vegetables on 290 acres in Kula, Teixeira hopes to spark the same early passion for farming in the students of Kula Elementary through the school’s new agricultural science program.

The program, which aims to teach students the business and science of farming, kicks off today on the site of the old Keokea School.

“The idea for the program came about in a conversation with community members (kupuna) about how to better serve our students in Kula so they felt they had a strong sense of place and the importance of agriculture in our community,” Kula Elementary School Principal Chris Bachaus said via email Thursday. “Members felt we needed to add more ‘common sense’ skills to their education while exposing them to a scientific laboratory setting.”

Bachaus said Kula Elementary currently has an after-school garden program on campus, but the 5-acre Keokea site offers more space for planting and will also allow students to work with livestock. 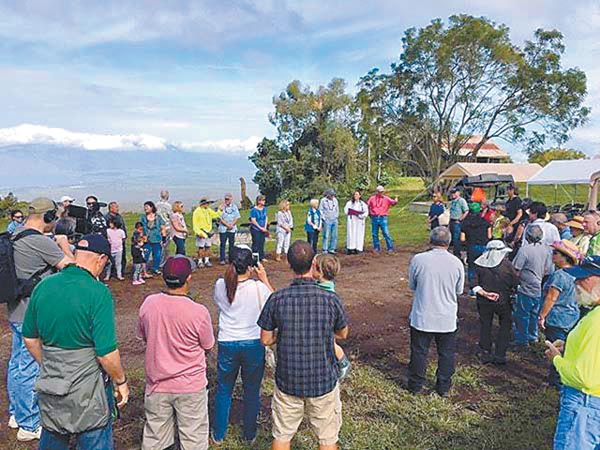 Kula Elementary School staff and community members gather to bless the site of the agricultural science program in February.

At the new site, 30 students from grades 3 to 5 will grow fruits, vegetables and other crops to market to local stores. They’ll also get to work with livestock that may include goats, sheep, small cattle and chickens. Teixeira, the instructor, said students could also experiment with aquaponics and hydroponics in the future.

“We’re trying to capture all the aspects of agriculture in this program, kind of give them a broad view of everything and let them choose their own path,” said Teixeira, the president of J. Tex Farms.

Teixeira said he plans to make the program “as real as possible” for the students, helping them budget, showing them what it takes to make a living as a farmer and teaching them the science and technology that go into crop production.

“Farmers deal with a bunch of things that you cannot project — the weather, the pests, the diseases,” he said. “There’s a whole bunch of things that us as farmers have to deal with. . . . It’s not as simple as just planting. We’re scientists. We’re mechanics. We’re engineers. We do everything.”

Over the past two years, the school and community have worked to clean, fence and prepare the land for planting. The state Department of Land and Natural Resources agreed to give the school a five-year lease on land where the former Keokea School once stood; it closed down when Kula Elementary opened in 1964.

“At the beginning it was a daunting task, as the property would need to be completely cleaned with heavy equipment to bring it back to a workable condition,” Bachaus said.

Community members and government agencies began pitching in. Bachaus said a longtime friend, who wished to remain anonymous, funded the clearing of the land, a massive project that drew Kula alumni and community members, as well as custodial staff from Kula Elementary, Maui High and Baldwin High. Both the county and the state helped fund the removal of green waste.

Bachaus said retired University of Hawaii extension professor Harold Keyser led the design of the site, and once it was cleared, the Upcountry Native Plant Nursery and the Maui County Master Gardener Program planted 30 fruit trees on the property. In February, a blessing was held to coincide with Chinese New Year.

“It’s really the community coming together to make it happen,” said Mae Nakahata, an agronomist with Alexander & Baldwin, LLC Diversified Agriculture and the vice-chairwoman of the Hawaii Agricultural Foundation Board of Directors.

Nakahata, who’s helped find funding for the project, said that she thinks it’s an important program for the school because “not everybody learns in the classroom.”

Bachaus said the school applied for and received $10,000 in seed money from the county in December to begin buying orchard trees, inputs and other materials. The state Department of Education pays for the water and electric on the property; the water system works, but electric installation is ongoing.

The state Legislature also has $3 million in the current budget to fund a classroom and storage building on the site, Upcountry Rep. Kyle Yamashita said, adding that the goal is to eventually connect the program with existing agricultural programs at Kalama Intermediate and King Kekaulike High School.

“Kula has always been an ag community,” Yamashita said. “I believe that we’ve got to get the future farmers interested in farming, and I think it starts at the elementary level.”

Teixeira, 28, said he doesn’t see as many farmers his age, and he hopes the younger generation will get inspired to give farming a try.

“If this program can create just a couple farmers, that’s huge,” he said.

Bachaus said half of the students will meet after school on Mondays and Tuesdays, while the other half will meet on Thursdays and Fridays. The school’s STEM (science, technology, engineering and math) coordinator, Brittany Neizman, will work with students in the on-campus garden program and help connect it to bigger projects on the farm, Bachaus said.

For more information or to get involved with the program, call Kula Elementary at 876-7610.

Kula Elementary School staff and community members gather to bless the site of the agricultural science program in February.

Kula Elementary School will kick off its agricultural science program today at the 5-acre site where the old Keokea School once stood. The program aims to teach students the business and science behind farming, as well as connect students more to the community. Students will work with livestock and grow crops to sell in local stores. Photo courtesy of Chris Bachaus

Halau Hula ‘O Mehanaokala performs the auana “Aia Ka La‘i I Ka‘uiki” while competing in the kupuna division of the Ku Mai Ka Hula 2018 hula competition at the Maui Arts & Cultural Center’s Castle Theater Saturday afternoon. The halau from Tokyo, Japan, under the direction of Ku‘uleinani Hashimoto, took first in the kupuna division and also won the Maui Nui Award and the Leianaikaroselaniomaui Award. The Maui News / MATTHEW THAYER photo