Project’s cost is estimated at $29M 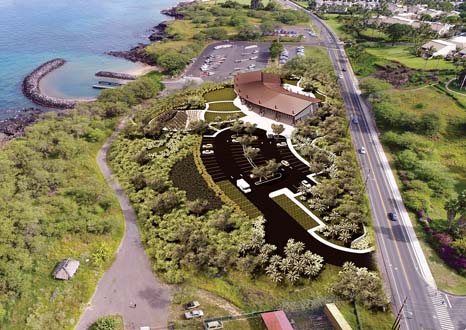 The county Urban Design Review Board has recommended approval of plans for a Kaho’olawe Island Reserve Commission education and operations center on 8.26 acres next to the Kihei Boat Ramp.

The project would consolidate commission operations (now located in Wailuku and Kihei) at a new 24,000-square-foot, two-story facility in South Maui. Now, commission staff members work in the Wailuku industrial area, where there’s a warehouse full of artifacts and museum-ready memorabilia. And, KIRC’s boat, its lifeline to Kahoolawe island, is being restored and rehabilitated in Kihei.

The commission manages, restores and monitors the Kaho’olawe Island Reserve, which includes the island that had been used as a military bombing range after the attack on Pearl Harbor in December 1941.

The board’s recommendation for approval came with no proposed design modifications. The project advances to the Maui Planning Commission, where KIRC will seek a special management area permit, said Michael Naho’opi’i, its executive director.

The proposal could come before the Maui planning commission as early as November.

As project approvals are being obtained and concepts narrowed down, Naho’opi’i said he still needs to seek funding from the state Legislature. Current project estimates are around $29 million, but costs need to be finalized.

The organization received $500,000 from the Legislature for the current design and entitlement work. Naho’opi’i said he aims to have project plans and approvals ready when he seeks construction funding from state lawmakers.

The project would be on the same site as the current boathouse, along with a maintenance building.

KIRC has been relying on state funding for several years since a $44 million federal trust fund dwindled. The federal money was set aside for KIRC’s short-term conservation programs. While the trust amount was considerable at the time, it was not substantial enough to establish a sustainable endowment for the long-term restoration and management of Kahoolawe, project documents say.

During this year’s legislative session, KIRC received around $1 million, 80 percent of which pays staff salaries and 20 percent of which covers operations, Naho’opi’i said. In previous years, the commission had nearly 20 staff members, but then had to make cuts because of a lack of funding.

KIRC also relies on grants to help fund projects, including those on Kahoolawe.

The Legislature established KIRC in 1993 to mange the Kaho’olawe Island Reserve. KIRC is a state agency, administratively connected to the state Department of Land and Natural Resources. The department provides some administrative support. Otherwise, the commission is largely autonomous and overseen by an appointed seven-member panel.

Legislators have pointed out a need for the organization to raise its own funds.

“The Legislature has asked us, ‘How are you going to create a sustainable financial plan for the long-term restoration of Kahoolawe?'” Naho’opi’i said.

The center can help achieve that goal.

In addition to centralizing offices and operations at the new building, the center will house a historical and interactive exhibit about Kahoolawe, along with meeting spaces, classrooms, a visitor center, gift shop and cafe.

The meeting spaces and classrooms will be open to the public. Conferences could be held at the center, which could add an educational component, which cannot be obtained at hotel ballrooms, Naho’opi’i said.

Admission can be charged for the exhibits, and the visitor center, gift shop and cafe could all draw in revenue, Naho’opi’i said, noting the boat ramp nearby accommodates sometimes hundreds of tourists daily.

He added that visitors and residents would be able to learn more about Kahoolawe’s storied history, which Maui youngsters today may not even know about. The island’s history includes Native Hawaiian activists George Helm and Kimo Mitchell and “the struggle they went through,” he said.

Helm was an advocate to protect Kahoolawe, and Mitchell helped behind the scenes. In 1977, they went missing at sea when they went to look for two friends who were also protesting the bombing of the island.

Currently, there is no exhibit in Hawaii solely featuring Kahoolawe and its changes throughout the years, as well as visions for the island’s future.

KIRC has lots of film and videos about the island’s history as well as artifacts.

Some of it has been displayed before at other sites, including Hale Ho’ike’ike at the Bailey House and the Smithsonian in Washington, D.C.

“We never shown everything,” Naho’opi’i said of KIRC’s artifacts and memorabilia. “We have it in our storage, just waiting for a venue to put it all in.”

Speakers would be able to visit the KIRC center to talk story with members of the public.

Landscaping would surround the center, but it wouldn’t be merely decorative. The plants would be those useful in Hawaiian culture, including lauhala and palms for weaving and uala, or sweet potato, Naho’opi’i said.

KIRC also envisions a wiliwili tree in its courtyard grown from seeds of the old wiliwili tree on Kahoolawe, featured in a 1913 photo of the island, he said.

The building would have two stories, but its second level would be the same height as the street, with a lower first level. An overhang would shade the bottom floor area.

Sustainability measures being considered for the project include a building designed to promote naturally ventilated public areas, spaces taking advantage of daylight, efficient electrical/mechanical operation and use of renewable materials focused at minimizing environmental impacts while providing comfort.

The center’s main entrance would be off of South Kihei Road at its intersection with Ala Koa Street. Parking would be provided.