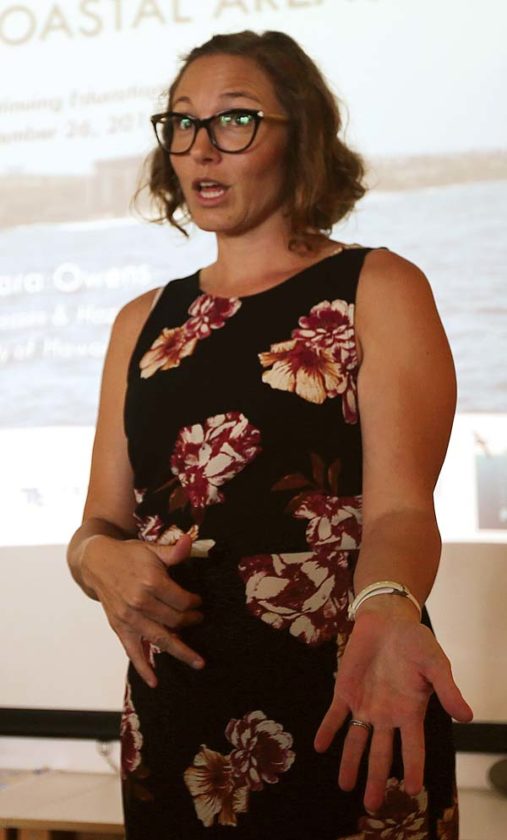 MAALAEA — The Maui County Planning Department is proposing new shoreline setback rules that incorporate sea-level rise data and draw “a literal line in the sand” for coastal development due to erosion.

The new rules, which are the first in the state to address sea-level rise, will be presented to the Maui Planning Commission at 5 p.m. Tuesday in the Kalana Pakui Building in Wailuku. A workshop on the proposed rules will be held Oct. 9 after the commission’s regular meeting.

The new rules would effectively wipe out the county’s current calculations for shoreline setbacks and establish an erosion hazard line that incorporates future erosion from sea-level rise. The new line would be used for coastal developments uniformly throughout the county, streamlining the application process for applicants and planners. 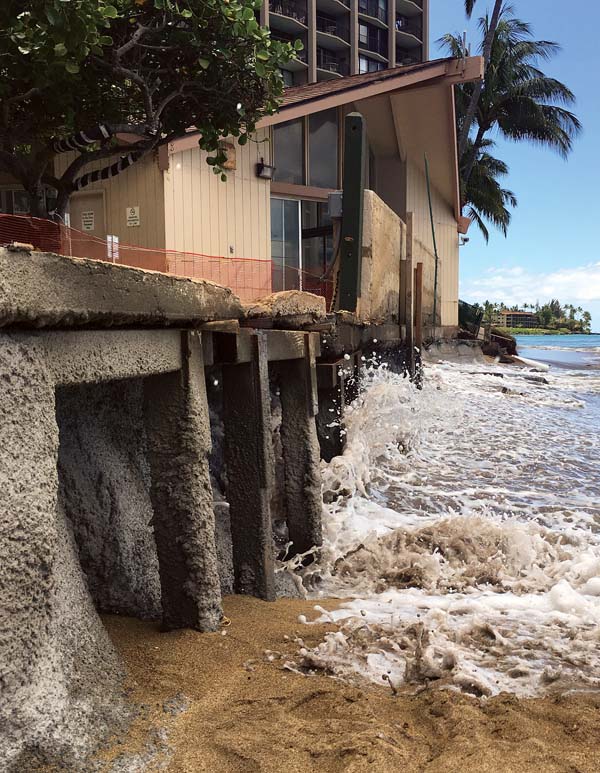 This photo from May 2016 shows erosion threatening a structure and part of Royal Kahana’s pool deck. TARA OWENS photo

The new rules follow Mayor Alan Arakawa’s proclamation in February that directed the department to revise rules and to incorporate sea-level rise in determining shoreline setbacks. A December report by the Hawaii Climate Change Mitigation and Adaptation Commission assessed vulnerabilities to coastal areas with sea-level rise and provided recommendations for improving resilience to coastal hazards.

Planning Director Michele McLean said Wednesday that the new rules are “a lot to take in” and are not up for adoption next week. She said she wants to give the public and planning commissions an opportunity to review and provide feedback before acting on them.

“For some properties, it certainly will be significant,” McLean said Wednesday. “This follows the proclamation of Mayor Arakawa and the climate commission report that we have to start factoring in sea-level rise to our shoreline setback rules.

“It would be irresponsible not to.”

If the rules are adopted, property owners in the middle of permitting and applications would be grandfathered into the new regulations and allowed to make certain improvements and repairs, McLean said. However, they would not be allowed to expand beyond the erosion hazard line. 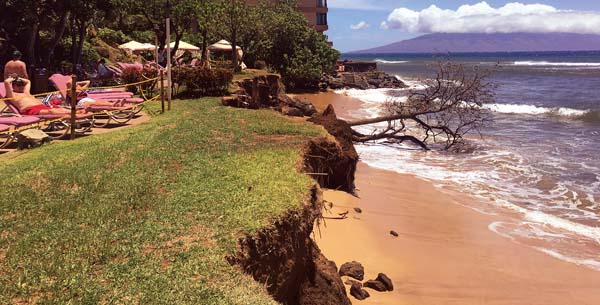 This photo from June 2016 shows major erosion from a storm outside Kaanapali Beach Club in Honokowai. TARA OWENS photo

On Wednesday, the Maui Chapter of American Institute of Architects explored the new rules and ramifications for coastal property owners. County and state officials provided a short presentation to about 25 residents and architects at the Pacific Whale Foundation in Maalaea.

Tara Owens, coastal processes and hazards specialist for the University of Hawaii Sea Grant College Program, said Maui’s significant erosion is due to sea-level rise; seasonal wave conditions and storms that move sand; and human intervention, such as seawalls, revetments and sand mining. She added that Maui has the highest percentage of beach loss in the state, partly caused by the sinking of the neighboring Big Island.

Eighty-five percent of Maui’s shoreline is eroding, she said.

Global sea levels are expected to rise 3.2 feet by 2100, but researchers now believe that the level could be reached by 2060. The rise could submerge or destroy 300 structures, 11 miles of coastal highway, 3,130 acres and cause $3.2 billion in economic losses to Maui, according to the architects group.

Hawaii ranks second to Florida as the state most at risk and could lose as much as 9 percent of its housing, according to the architects group. The statewide cost is estimated at $25 billion.

Waves wash over Honoapiilani Highway at Mile Marker 14 in May 2017 in Olowalu. ASA ELLISON photo

Owens listed a number of options coastal experts are pursuing. They include setbacks and relocation; reconfiguring homes; beach nourishment and/or dune restoration; and temporary erosion control, such as sand pushing or erosion blankets.

Owens provided several photos of hotels and condominiums employing some of the options with the majority of those properties in West Maui. Some property owners in the area, though, have been subjected to lawsuits due to permitted work and public outcry against seawalls.

Since 2007, more than 25 seawalls have failed with the vast majority from Lahaina to Kapalua, Owens said. Honokowai had six and Keonenui Bay had five.

Jim Buika, coastal resources planner with the planning department, joined Owens at the presentation and said they spend most days traveling to beaches to see “the good, the bad and the ugly.” He said Maui’s beaches are shrinking due to development, sandbags and other man-made interventions.

“You’d be surprised at how much ugly there is on Maui,” Buika said. “It’s an incredible struggle to preserve what we have at this point. We need some paradigm shifts in our thinking.

“Our planning process right now is very reactive in nature. It’s parcel by parcel. We try to protect one property after a big storm and then it has impacts on the next property and chews up an entire shoreline.”

Buika said county planners regularly have to deal with property owners who have built too close to the shoreline using the county’s current rules. For individual properties, current setbacks are based on factors, including average erosion rate and the depth of the lot.

Buika showed a photo of two properties on the makai side of South Kihei Road. Both were approved under current setback rules, but the new rules leave them almost completely within the erosion hazard line.

The projected line was displayed using the Hawaii Sea Level Rise Viewer that launched in December. The viewer provides interactive maps of projected exposure and vulnerability to coastal hazards with sea-level rise.

To use the viewer, visit www.pacioos.hawaii.edu/shoreline/slr-hawaii/.

Some architects asked if the line would account for variation in geography and topography. Buika said the line is subject to change but “is a good planning guideline at this point” and accounts for various geographies.

Owens acknowledged that the county could be open to lawsuits from homeowners encroaching the new line if they are told they cannot build a seawall to protect their property. She said property owners at Sunset Beach on Oahu are embroiled in a suit with the state due to unauthorized armoring.

McLean said she would have to consider projects on a case-by-case basis, which could include armoring if there are no impacts to other properties or other extenuating circumstances. She knows there may be a situation, though, where the department would not allow a homeowner to build walls around their home.

“That’s a legal matter that I can’t get into,” she said. “For example, if we were to deny a permit and they filed a suit against the county, what course that would take I really don’t know.”

McLean said her department has explored the scenario but not in great detail.

“We don’t like going into hypotheticals too much, but I do think it’s a question we do have to be prepared to answer,” she said.

Maui Planning Commissioner Lawrence Carnicelli said during Wednesday’s gathering that more education is needed for homeowners on building too close to the shoreline. The former government affairs director for the Realtors Association of Maui said some homeowners may find a way around the new rules, but officials need to draw “a literal line in the sand.”

“It’s impossible to write law that’s going to protect you from every loophole, every attorney or high-paid guy from wherever they are,” Carnicelli said. “We’re going to do the best we can, but guess what, there’s going to be guys that find a workaround.

“It’s unfortunate that you can’t fix every puka in the law.”