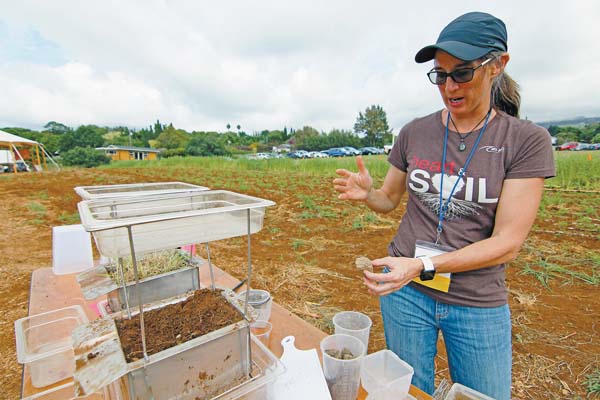 Jen Moore-Kucera, the west regional soil health team leader for the Natural Resources Conservation Service, demonstrates the difference between healthy and depleted soils at Oko‘a Farms in Kula on Sunday. Moore-Kucera was among the many agricultural experts who came to Kula for the Hawaii Farmers Union United state convention, which ran from Friday to Saturday. The Maui News / COLLEEN UECHI photos

KULA — At first glance, the dried clumps of soil in Jen Moore-Kucera’s hands look almost identical. But drop them into two cups of water, and the difference is soon clear — one clump stays together in a thick, dark mass, while the other quickly disintegrates into the murky water.

“The good one that stayed together was no till with cover crops and lots of diversity,” said Moore-Kucera, the west regional soil health team leader for the Natural Resources Conservation Service. “The other one was . . . lots of tillage, lots of working the ground, no cover crops, no giving back to the ground to try to regenerate and rebuild that organic matter.”

Moore-Kucera was among the many experts who spoke on soil health and farming practices during the Hawaii Farmers Union United state convention Sunday. Held at Oko’a Farms in Kula, the convention ran from Friday to Sunday and drew about 300 participants, mostly from Maui, said Vincent Mina, who was re-elected president of the organization Sunday.

Mina said the convention spoke to the importance of putting microbial life back into the soils. 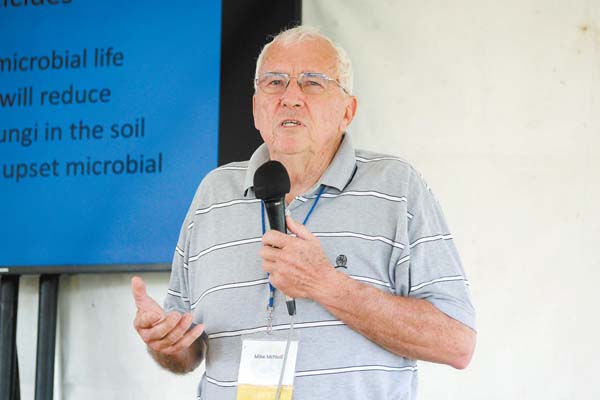 Moore-Kucera said that some ways farmers can test the health of their soil is by searching for signs of life, such as beetles, ants and spiders. They can also observe how well the soil sticks together, a result of beneficial bacteria and fungi that release a sort of glue that holds the soil together.

Plant roots that come out in the shape of a “J” can also be an indicator of soil that is too compacted. Moore-Kucera recommended sticking a wire flag into the soil to test this. A good depth is at least 8 to 10 inches.

Mike McNeill, the president of Ag Advisory Ltd. in Iowa, said that when it comes to farming, many people try to treat the symptoms instead of the actual problem, which is unhealthy soil.

“The way plants take up nutrients is they have a colony of microbial life around the root. It’s called the rhizosphere,” McNeill said. “It’s the area around the root, and it’s filled with all kinds of bacteria and microbes. They digest the minerals and get them into a form that the plant can then take up. So if you kill them off, the plant can starve to death right next to mineral food because it’s not in a form that it could utilize.”

McNeill has been trying to help farmers restore soil that’s been exposed to herbicides and pesticides, which he said upsets the balance of those beneficial microbes. The solution, he said, is to “stop using anything that ends in ‘-cide.’ “ 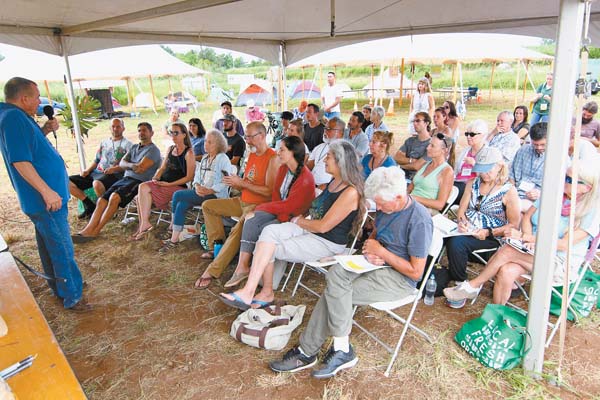 Convention participants listen to speaker Jim Zamzow, whose family owns a chain of gardening stores in Idaho, during a session on brewing compost tea with local ingredients.

“We don’t need to have poisons to fix our problem,” he said. “The original problem is the lack of the right food in the soil. So let’s get that food corrected.”

McNeill recommended using a “microbial stimulant,” applying a material to the soil that can change the gene expression of the DNA and can help multiply the good bacteria needed in the soil. He gave the example of Catawater, a Texas-manufactured product that helps stimulate bacterial growth. Other solutions include avoiding tillage on wet soils and using cover crops.

In Hawaii, many places still bear the impacts of monocropping and pesticides from the sugar and pineapple industries.

“With the cane and the sugar companies, their trajectory was using stored sunlight as their fertilizer, and stored sunlight being petrochemical inputs,” Mina said. “These are high-nitrogen inputs. Our organization is focused on growing the nitrogen with cover crops.”

Mina and his family run Kahanu Aina Greens, a 2,000-square-foot urban farm out of their Wailuku home. When the microgreens are cut, they’re tossed back onto the soil and broken down by microorganisms to create a “beautiful, loamy, rich” soil that looks like chocolate cake, Mina said. The small farm produces about 500 pounds of microgreens a week, and the regenerative practices have greatly reduced the family’s farming costs.

“There’s a natural process to life, that if we collaborate and cooperate with it, it will give us all that we need and more,” Mina said. “That limits our amount of inputs . . . and if you can limit a farmer’s outside inputs, you’ve got his ears.”

Mina said he would like to see Hawaii develop its cover crop seed industry, and added that he also spoke with Gov. David Ige, who visited the convention Saturday, about getting equipment on every island to help “roll down and crimp” cover crops. The equipment snaps the stalks while keeping the roots in place, which not only puts humus (organic matter created by decomposing plant material) into the soil but also acts as a natural weed mat.

The good news, Moore-Kucera said, is that Hawaii has “a lot of opportunity to improve” the soil in the wake of intensive plantation production. She recommended four main steps: minimizing disturbance by reducing or eliminating tilling; maximizing soil cover by growing crops or using mulch or compost; maximizing biodiversity by planting and rotating a variety of cover crops, and adding livestock to farms with nonvegetable crops; and maximizing the presence of a living root by always having something in the ground, which Hawaii farmers can fortunately do year-round.

“We can make nitrogen fertilizer from the nitrogen gas in the atmosphere, but it takes us like 1,000 degrees Fahrenheit, a ton of oil, high pressures,” Moore-Kucera said. “These guys (the plants) are doing it right now as we speak, just on a nice warm day. . . . Using legumes or nitrogen-fixing plants in your rotation or your cover crop can provide free nitrogen to your system.”