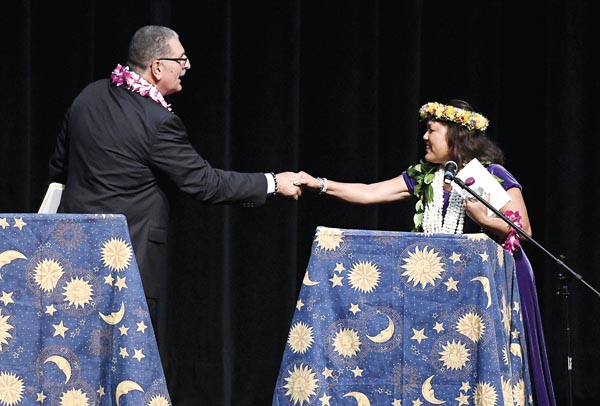 PUKALANI — Looking to students as the future, mayoral candidates Elle Cochran and Mike Victorino offered their thoughts on increasing job, housing and recreational opportunities for Maui’s youth during a debate held at King Kekaulike High School on Tuesday night.

The “Debate of Ideas,” which was sponsored by The Maui News and the high school National Honor Society, drew more than 100 people to hear the candidates in one of the last forums before Tuesday’s general election.

The panelists asking the questions were Wendy Osher of Pacific Media Group, Chivo Ching-Johnson of Akaku Maui Community Media, Brian Perry of The Maui News and King Kekaulike High School student Bianca Vasquez, who spoke to the challenges young people face when it comes to staying on Maui.

“Most of my peers do not plan to live on Maui because they don’t see a future here,” said Vasquez, a member of the National Honor Society. “What would you do as mayor to ease the high cost of living and create career opportunities that would make Maui a more attractive place to live for young adults and families?”

Cochran, a council member since 2011, pointed to Maui Economic Development Board’s Kama’aina Come Home program as a way to find out what kinds of jobs young people are interested in. 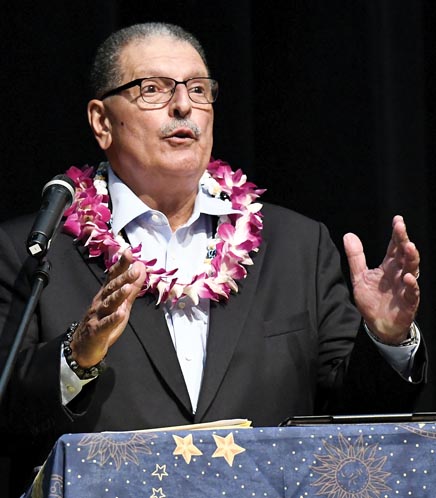 “It’s probably in technology, and we can definitely step up in that field,” she said.

Cochran also said that the administration currently has a Child and Youth Commission, which could tackle youth-related issues. She also praised places like the Paia Youth & Cultural Center, which not only offers recreational activities like skateboarding but gets the kids involved in filmmaking and other activities that could lead to a career.

“Not only are they learning and playing, it’s actually building skills for the future, so I’d like to create more of those,” Cochran said.

Victorino, who served on the council from 2007 to 2016, said that livable wages are the first step to helping Maui’s next generation, but that affordable housing also was important.

“I truly believe that we have many opportunities to help you and your generation, but we have to think forward,” he said. “We have to ask you. You want walkable, bikeable communities; you want multimodal transportation. I feel that you will tell us, and we need to do what you ask of us.” 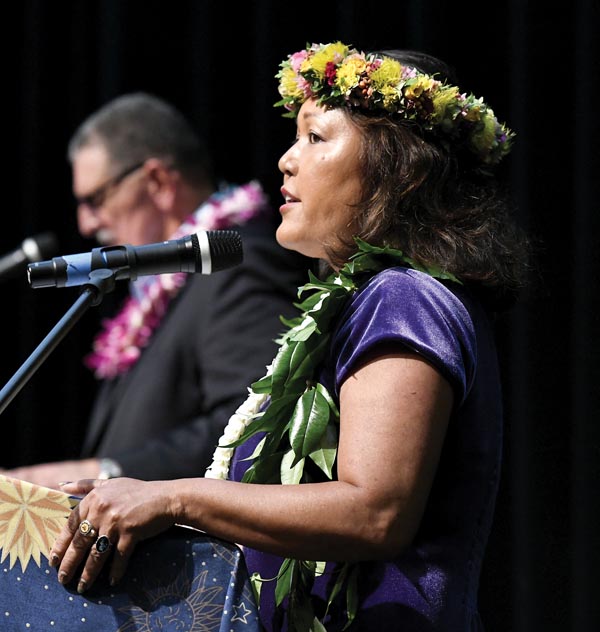 Victorino said if elected that he would establish an internship at his office for a student who could represent the needs of Maui’s youth. He thought there were opportunities to create a family center, bowling alley and other venues that would promote activities to keep kids out of trouble.

Both candidates also talked about building housing that young people and local families can afford, as well as how to encourage short-term rentals to convert to long-term housing.

Cochran pointed out that the county has hired an outside contractor, LODGINGRevs, to root out illegal rentals. Cochran said the rules and penalties are in place; it all comes down to enforcement, which she said would be a priority for her administration. She believed it was “very doable” to encourage short-term rental owners to convert to long-term rentals, particularly those that are operating illegally.

Victorino thought the county needed to offer incentives for owners to change over to long-term rentals. Even more importantly, the county needs to build units, and Victorino said he planned to push for construction to start on already approved housing projects once he got into office.

“Enforcement is one aspect, but building is the second, and most importantly, incentives that will make a difference and make more people willing to go back, not only with the punitive action but with incentives,” he said. “Combining that, we will find solutions very quickly.”

He added that the county has land available in West, South and Central Maui to build housing and emphasized the construction of multifamily units, which he said would be especially appealing to young people who value mobility and don’t want the “800-pound gorilla” known as a mortgage.

Cochran, who chaired a temporary investigative group on housing, pointed to specific plots of county-owned land that would be ideal for housing. There’s land in Honokowai that’s already zoned residential, lots in Maui Lani that have infrastructure and allow for affordable housing, as well as land by the Wailea Fire Station.

“We don’t have to be beholden to a landowner to build affordable,” Cochran said. “We’re here to build homes for this community. These are our own lands, and we can build on it now.”

The candidates also weighed the issues of how to support the tourism industry and the jobs that it brings without taxing Maui County’s environment.

Cochran said the emphasis shouldn’t be so much on marketing and filling planes; it should be about managing and educating the visitors who are already here. Even the tourists are complaining about the tourists these days, said Cochran, who runs a surf shop in West Maui with her husband.

“If you have visitors having negative experiences, they will not be returning,” she said. “By managing, by protecting the environment, making sure our waters are the best quality, our reefs are thriving, our rainforests and waterfalls are healthy, then that in turn is going to keep jobs in place.”

As for industries beyond tourism, Cochran said that Maui County can be “a role model for the rest of the world” by tapping more into the solar, wind, water and other renewable energy resources that could both keep Maui sustainable and provide jobs.

Victorino agreed that education is important. He also said it’s vital to provide housing for the workers in the hospitality industry.

“They (visitors) come back because they enjoy the people of Maui County,” he said. “So we need to take care of our workforce. Housing and other issues are very important. These are where we have happy and healthy workers who are being able to not only promote Hawaii but also make sure Maui County stays in the forefront as the best destination in the entire world.”

Victorino said that one of the first things his administration would do is to create a working group and a liaison dedicated to the hospitality industry. They would monitor and work with the industry to make sure hotels and airlines are offering education and protecting the environment.

As for diversifying the economy, he touted sports tourism, diversified agriculture and the film industry.

With a steady rain falling outside, the candidates also tackled issues of water Upcountry.

Victorino pushed for an “interconnectable system” for Maui County. He pointed out that Oahu, with nearly 1 million people, rarely has to deal with drought issues because it has such a system.

He added that building three 1 million gallon reservoirs would also “be a great start” and that there were some unused wells Upcountry that could be developed to provide water for residents.

Cochran said the water is there for those waiting for meters on the Upcountry wait list, but it comes down to issues of transmission. The costs to put in the pipes needed to set up water meters often fall to residents who can’t afford it. She said she was “all for this county” providing subsidies to help pay for the infrastructure.

“As a county, we have a great borrowing power, we have a great bond rating,” she said. “We can help subsidize these efforts because that is what the county should be here for. It’s for the people. It’s to get houses. . . . These are ways to keep our kamaaina home.”

When asked whether residents on the wait list should be able to create a hui to pay for infrastructure costs within their neighborhoods, Victorino said that the county would have to talk to attorneys to see what’s possible, since the county operates on a “first come first served” basis for water meters on the wait list.

However, Victorino said that maybe it’s time to consider whether the county could go by neighborhood and have everybody share the costs so that meters can be installed quicker and the list could be cleared.

Cochran was concerned about possible lawsuits if the county allowed people to jump the line. She said it will be up to the Upcountry community to determine whether it makes sense to go by neighborhood.

“And if it does, then maybe we can try to figure this out in that way and somehow, if possible, disregard the numberings just for a second, if it makes the most sense for everyone to hui in to build the infrastructure in your area,” she said.

Cochran, who has touted receiving donations from everyday people rather than special interest groups, also was asked about support from groups like the Sustainable Action Fund for the Environment and the Maui Pono Network, and whether she would consider them special interest groups. Cochran replied that “all those groups are environmentally friendly” and that she wouldn’t be beholden to them simply because they ran ads in support of her.

“The groups that have stepped up to support me, we’re like-minded,” she said. “We have the same philosophy in protecting the future and protecting what we have and enhancing what we have. . . . The majority of my donors are the nonprofit types, the environmental and cultural people. If people think that’s a bad thing, I don’t know what to say about that, because that is how I live.”

Victorino was asked to provide examples of times he had voted against projects supported by his donors. Victorino didn’t provide a specific example but said that there have been many instances where he’s made decisions to protect environment, such as supporting setbacks in Olowalu.

He said anybody who donates to him has to know that his three guiding motivations are “God, my wife and my family, and the people of Maui County.”

“We’ve put many conditions that I’ve supported to make sure the environment and other issues were taken care of,” he said. “I voted in many cases where I felt this development or this project would help our local people, that you would have homes or units to live in and on top of that, be able to enjoy the pristine waters of Maui County.”