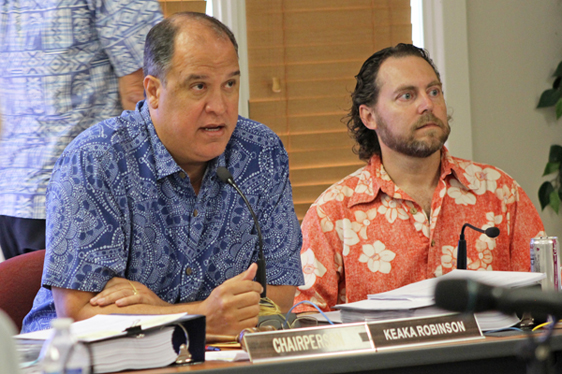 WAILUKU – The Maui Planning Commission recessed a hearing for a Haiku zipline company on Tuesday, to the audible groans of neighbors seeking an end to the zipline’s operations.

The contested case hearing for Derek Hoyte of D&S Ventures, who is requesting a special use permit to continue operating Northshore Zipline Co., will resume at 9 a.m. Dec. 11.

Hoyte originally came to the commission in July 2016 and was denied a permit after neighbors spoke against it. In October 2017, a judge vacated the decision and sent the matter back to the commission.

Cal Chipchase, attorney for D&S Ventures, said Tuesday that the company met all the criteria for a special use permit when it first applied two years ago.

“Nothing has changed in the use or operation, and I respectfully suggest we still meet them today,” Chipchase said.

Located at 2065 Kauhikoa Road in Haiku, Northshore Zipline offers a seven-zipline tour on a 17.5-acre site that was once part of Camp Maui, the training grounds of the 4th Marine Division during World War II.

In August 2013, the Planning Department sent a notice of warning to the property owners and told them they needed a special use permit to operate a zipline in a county agricultural district.

Northshore Zipline kept operating, and in May 2014, the department sent another warning, then a notice of violation in December 2014. The company was ordered to cease operations or be fined $1,000 a day.

D&S Ventures agreed to get a permit and submitted an application to the county in October 2015. The commission denied the permit in July 2016 over concerns that the historic preservation uses seemed secondary to the zipline operations. Neighbors also testified that Hoyte set up the ziplines without consulting the community and that the noise had been bothering them ever since.

D&S Ventures appealed, and in October 2017, 2nd Circuit Court Judge Rhonda Loo vacated the decision because the commission had not followed the procedures of a contested case hearing, which requires testifiers to be sworn in. It also would have allowed D&S Ventures’ attorneys to cross examine witnesses and provide rebuttal evidence.

Loo sent the application back to the commission.

On Tuesday, the commission went into executive session for about half an hour before the hearing began in front of a standing-room-only crowd.

While ziplines aren’t mentioned as a permitted or special use for agricultural districts, D&S Ventures is trying to get a permit as an “open land recreation use,” which is a special use in the Maui County Code.

D&S Ventures has long argued that its operation is dedicated to historic preservation. Guides go over the history of Camp Maui during zipline tours, and photos of the old camp are attached to posts around the property.

However, the Planning Department said in its report that historic preservation appears secondary to the ziplines.

David Callies, a professor at the University of Hawaii William S. Richardson School of Law, was called as a witness for D&S Ventures. He argued that it shouldn’t make a difference because the “special uses” section of the code doesn’t address “principal” or “accessory” uses.

But, commissioner P. Denise La Costa asked, if a property is zoned agricultural, shouldn’t the primary use be agricultural?

“If we were speaking with a blank slate, that may very well be true,” Callies said. “But the truth of the matter is you’re governed by what you permit in your code, and your code permits a variety of other things that are not, strictly speaking, truly agriculture.”

Commissioner Christian Tackett asked Callies how he would respond to the residents who have complained about the zipline.

Callies said that he sympathizes with them, “but it’s a permitted use.”

“If folks have a problem with that, and I can certainly understand why they would have a problem, then the problem is with the existing public land use controls and the limitations on the use,” he said.

“If you have highlights and high points that you want to address, please do that,” Robinson said. “But going back and forth for a Q&A for over an hour now, and all you do is reciting paperwork that’s already come from this commission. That is not the best use of commission time and, I think, of your time.”

Goodin said it was important to review “the conflicting determinations in the department’s report.” The Planning Department recommended approval of the permit in 2016 but reached different conclusions in its most recent report. Goodin said that the only change since 2016 was the removal of a proposed 80-foot zipline tower from the application.

Deputy Corporation Counsel David Galazin told Goodin that the latest application had to stand on its own merits and asked him to stop referring to the 2016 report.

After the meeting, Planning Director Michele McLean said that the department’s latest report was “just a fresh analysis.” When the department first did a report in 2016, “we hadn’t received any input that would lead us to a recommendation of denial.”

“At that hearing (in July 2016), and since then, including today, we’ve received quite a bit of testimony talking about the impacts that the operation has, and so our analysis is different now than it was then,” she explained.

McLean said the department can change its recommendation, particularly since the case was sent back to the commission with a new public hearing, a new staff report and new evidence.

McLean also said that Northshore Zipline currently owes more than $900,000 in fines, but that the company has appealed to the Board of Variances and Appeals. That meeting will be held at 1:30 p.m. Thursday in the Planning Department Conference Room, but there will be no public testimony.