Wristbands for Pools of Oheo are considered 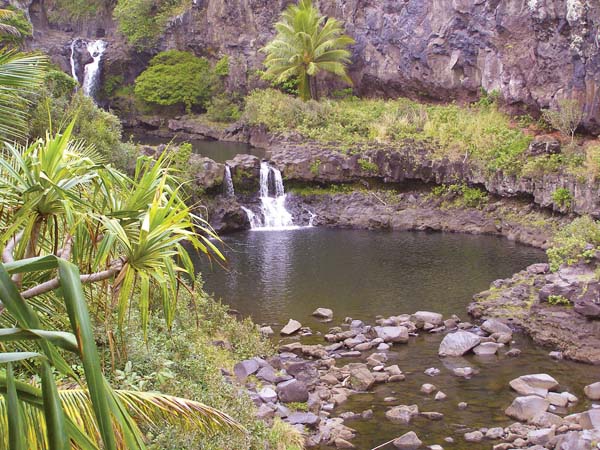 Haleakala National Park is considering a wristband reservation system at the Pools of Oheo in the Kipahulu District due to increased visitor traffic and concerns about rockfalls and flash flooding.

Closing the pools permanently to the public is another possibility being considered by park officials looking to resolve ongoing safety issues.

The two options and a third — to take no action — are part of the park’s proposed Kipahulu Comprehensive Plan and environmental assessment. The plan provides guidance on improvements to the visitor center, trails, campgrounds, as well as improvements to supporting operational facilities, such as maintenance buildings, the fee station and staff housing and offices.

The park will be holding a public meeting on the proposed plan from 4:30 to 6 p.m. Oct. 15 in the Kipahulu District Visitor Center. All comments on the plan must be submitted to park officials by Oct. 31.

About 800,000 visitors stop by the Kipahulu District each year and 100 visitors every day explore the waterfalls and pools, according to the plan report. The pools were identified as the district’s “main attraction, despite having no accessible route to view them and safety concerns that include visitors falling or jumping off rocks into pools along the Pipiwai Stream or being struck by rockfall at Waimoku Falls.”

While most severe incidents are a result of visitors engaging in prohibited activity or being unprepared for their visit, officials said the plan is needed to consider safety messaging or possible closure of the pools.

“It has been noted that the Pools of Oheo are among the most important attractions to the area, and visitors could take it upon themselves to create trails in seeking access,” the report said. “In doing so, visitors have created three recreation sites at the pools, two of which were found to have a high level of recreation-related damage.

“However, the Pools of Oheo are closed to swimming nearly 60 percent of the time for safety purposes.”

All access to the pools has been closed since Jan. 3, 2017, after a rockslide on an 80-foot cliff face left one visitor with minor injuries. The park spent about $100,000 in January to remove vegetation, loose debris and rocks likely to fall from the cliff face of Oheo Gulch.

Compliance coordinator Linette King said via email Tuesday that contracted rock scaling and improved safety signage have been completed. She said the pools remain closed because the stream monitoring system that allows park staff to anticipate flash flooding and to evacuate the pools during dangerous high water flows is inoperative.

Once the system is operating, the pools will reopen, King said.

Of the three alternatives in the plan, park officials prefer to allow visitors to access the pools at their own risk and to expand facilities and visitor opportunities within the developed area of the Kipahulu District.

Under the preferred plan, no more than 117 people would be allowed in the Pools of Oheo at one time. Park staff would continue adding signage and messaging about the dangers of the pools, such as floating debris and jumping off rocks.

Future concession contracts could include creating a permit or reservation system using wristbands, which would operate as a “one-in, one-out” strategy to manage pool capacity.

Keeping the area open only to commercial tour buses and a shuttle service to Kipahulu or limiting bus drops to before 10 a.m. and after 2 p.m. could manage visitor numbers.

If the park were to close the pools, staff would reroute the Kuloa Point Trail so it does not go to the gate to the pools. The stairs leading to the pools would be removed and viewing overlooks would be added.

Park staff would research other desired visitor activities in the area and implement a permit or reservation system for parking lots.

King did not have any details on how the park would institute a wristband system and said potential strategies “would need to be refined at a later date.”

She emphasized that closing the pools is not preferred by the park, but it needed to be considered among the full range of alternatives.

Closing the pools could improve water quality in the long term, but it might not increase visitor safety, according to the plan. It also would prevent Native Hawaiians from swimming in the pools and engaging in a traditional cultural activity. Swimming allows those with familial ties to Kipahulu to connect to kupuna.

Blocking off the pools would reduce visitor enjoyment and likely decrease visitation to the park, the plan said. The closure would have adverse economic impacts on the tourism industry and associated businesses.

If the park takes no action, officials would maintain annual operating costs of $1,777,000 and 17 workers in the Kipahulu District. The park also would pay $985,000 in one-time facility costs, including for the design, construction, rehabilitation, upgrade or adaptive reuse of the visitor center, campgrounds, picnic areas, roads, parking areas, administrative facilities, maintenance facilities, trails and other visitor and support facilities.

The park’s preferred plan would increase operational costs by $738,000 and add about five new workers. Facility costs would be $5,356,000 along with $1,638,000 for the development of new film and visitor center exhibits and the establishment of a new arboretum.

Other actions in the park’s preferred plan include opening trails to ranger-guided hikes or self-guided hikes and an added 500-foot spur to connect the Pipiwai Trail to the Kanalulu House via the lower Kapahu Trail.

A new 2,100-foot trail also would be created to link the campground to the ocean overlook. The new trail would be built as a boardwalk to help guests with mobility impairments and connect with the Kahakai Trail to create a loop near the walk-in campsites.

A 500-square-foot ocean overlook platform on the boardwalk would act as a destination for the Kuloa Point Trail and a turnaround point, according to the plan. Pedestrian pullouts would be installed along the trail between the campground and viewing platform, as well as feature benches and interpretive waysides that would focus on different aspects of Hawaiian culture.

The park would build a new arboretum and research lab featuring native and Polynesian plants. A 625-square-foot bunkhouse would be renovated and continue to serve as temporary housing for staff, volunteers and researchers.

Campsites would be numbered and a limit established. Visitors would obtain permits for a fee for specific sites either prior to arrival or at the fee station and visitor center.

Twelve drive-in sites would line the campground loop and each site would include a tent pad, secured picnic table, pedestal grill and designated parking spots. The 600-square-foot sites would be limited to six people per campsite.

Seven walk-in sites would be created near the coast by the accessible trailhead. Each site would be about 600 square feet and limited to four people and two tents per site. A 1,700-square-foot parking area would be built near the toilet and information bulletin board.

A walk-in group site would accommodate 25 people in its current location northwest of the drive-in sites. The group site would include five tent pads and a central community space with picnic tables.

Part of the purpose for the plan is to identify the appropriate size and locations for visitor-serving facilities as well as strategies to address increasing visitors, according to the plan.

Congestion at the fee station has caused backups to Hana Highway with off-road parking and crowding creating safety concerns. The problem is exacerbated following heavy rains with the overflow parking lot and unpaved road becoming impassible.

Comments on the Haleakala National Park Kipahulu Comprehensive Plan and environmental assessment may be submitted electronically via the NPS Review Planning, Environment and Public Comment website at https://parkplanning.nps.gov/KCP or emailed to HALE_Superintendent@nps.gov with the subject line “KIPA Comprehensive Site Plan Comments.”