Attack on the coqui frog 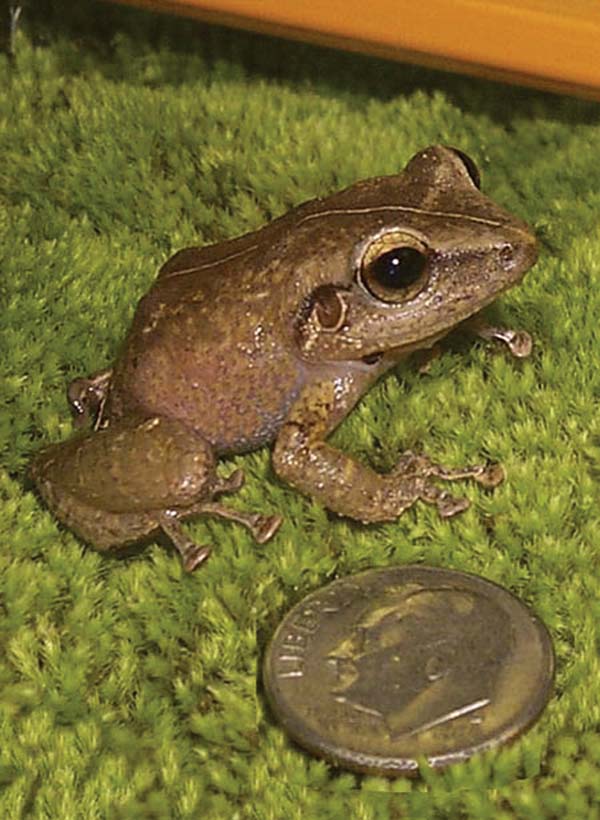 The male’s mating call, a two-note, high-pitched “co-qui,” gives the coqui frog its name. With no predators, the frogs from Puerto Rico can proliferate and eat large quantities of native insects, which can throw off the local ecosystem. DLNR / Hawaii Invasive Species Council photo

When Todd Johnson started hearing coqui frogs near Five Corners in Haiku a couple of years ago, he knew the neighborhood needed to get ahead of the problem fast.

So, he reached out to the Maui Invasive Species Committee and started doing patrols of his property at night, armed with a headlamp, citric acid solution and the occasional jar.

“When I first started doing this, people were passive,” Johnson said. “(They thought) ‘Oh, it’s a frog. It sounds cute.’ But the problem is they have no predators here. So we have to be the predators.”

In Haiku, home to the island’s largest known population of coqui frogs, the everyday homeowners’ fight against the invasive species has become just as important as the efforts of MISC, which can’t be everywhere at once.

“The public is our greatest ally. They’re the eyes and ears,” MISC Manager Adam Radford said.

Limited funding has forced MISC to get creative, and that includes putting tools in the hands of residents to help curb the spread of the invasive frog. While MISC employees tackle overgrown, hard-to-reach areas, residents can hunt down the frogs in their own yards.

Johnson administers a group on Facebook called the “Coqui Frog Coalition for Haiku Maui Area,” a network to coordinate search efforts and to share information about frog sightings. The group started in October and had 30 members as of Monday.

“The problem on the Big Island was they got to the point where it was out of control,” said Johnson, a former Waimea, Hawaii island, resident. “Right now, we have an opportunity to contain it or eradicate it.”

The small, nocturnal coqui frogs are native to Puerto Rico and were accidentally transported to Hawaii on plants around or before 1988, according to MISC. They’re about the size of a quarter and are usually brown or gray brown. The male’s mating call, a two-note, high-pitched “co-qui,” gives the frog its name and keeps plenty of residents up at night. With no predators, the frogs can proliferate and eat large quantities of native insects, which can throw off the local ecosystem.

On Maui, there are seven active populations, including in Maliko Gulch, where the frogs are likely most populous. Molokai and Lanai have none, though there have been sightings on Molokai, most recently in June. The number of active populations on Maui has slowly grown from three in 2015 to seven this year.

“We’re basically working through the most critical locations at this juncture, places where the frogs are already spilling out of the gulch,” Radford said. Places where “if we let them go any further, we’d probably lose Haiku and Maui to coqui.”

Radford said 12 employees handle the coqui frog problem full time. They’re out in Maliko Gulch most weeknights and sometimes on the weekends.

MISC gets a total of $3.1 million from the county and the state, $1 million of which goes toward coqui frog efforts. While Radford said the county has been supportive in the past, MISC doesn’t have the staffing it needs to keep an eye on the coqui frog and 50-plus other invasive species in Maui County. Ideally, Radford would like to have $4 million for coqui frog efforts. He said MISC has put in “a very preliminary proposal to the county for more funding” and will have to hit the ground running once the new mayor and council are sworn in come January.

In the meantime, staff are training residents to eradicate frogs around their own homes. They teach people how to properly mix citric acid with water and apply them to infested areas. They loan out sprayers. And, they also remind homeowners to remove the overgrown vegetation and rubbish piles that can harbor the frogs.

Radford said citric acid “has very few unintended impacts” and is a food additive “that we as people consume on an almost daily basis.” For the frog, however, the citric acid is corrosive and interferes with its ability to breathe, according to the University of Hawaii’s College of Tropical Agriculture and Human Resources.

Sally Irwin lives right by Giggle Hill and said the situation in Haiku is “definitely getting worse.” She’s had to re-landscape her property and bring in backhoes to remove the vegetation that could harbor the frogs. Two weeks ago, she borrowed a large sprayer from MISC. Irwin said that helped, but if others aren’t doing the same, the frogs could easily return to her yard.

“If they get close to your windows, they definitely will keep you awake,” said Irwin, a professor and geneticist at UH-Maui College. “Sometimes, we’ll have to go out and get the ones that are closest. But it’s really hard to find them. They’re small and they shut up when you get close to them.”

Irwin said that the citric acid has killed some of her plants, but she said “I would continue using it if that’s our only option. I think (the frogs) are a bigger problem than losing the plants at this point.”

The college of tropical agriculture advises people to test the spray on a small section of a plant and to thoroughly rinse the plants with fresh water about an hour after spraying.

Lucienne de Naie, president of the Haiku Community Association, said that the association gets reports from people “that they just think that the population is spreading.” De Naie said the frogs haven’t reached her neighborhood in Huelo, but she can hear them when she goes to the recycling center or the Haiku Community Center at night.

De Naie said she likes the idea of neighborhoods gathering together to tackle the problem.

“If the county and nonprofits and community groups work together, you’re bound to get more bang for the buck than if everybody points and says, ‘It’s Maui Invasive Species that has to do that,’ ” she said.

Johnson said the newly formed Facebook group hasn’t gone on an organized coqui frog hunt yet, but he “would like to go that direction.” A whole group working together to comb a property would be much more effective than the one-man nightly hunts in his backyard.

Johnson said the frogs used to be so loud he had to sleep with the windows shut. Now he keeps them open at night.

“I go out just about almost every night, or every other night, because I hear them out there, and I’m like, ‘If I don’t get him, he’s going to reproduce,’ ” Johnson said.

He said he’s encouraged that there are people in the group who don’t have the problem yet but are aware of it and want to get involved.

For more information on the frog, visit mauiinvasive.org/coqui-frog/got-coqui/.

The male’s mating call, a two-note, high-pitched “co-qui,” gives the coqui frog its name. With no predators, the frogs from Puerto Rico can proliferate and eat large quantities of native insects, which can throw off the local ecosystem. DLNR / Hawaii Invasive Species Council photo

Police are asking for the public’s help in identifying four males suspected of being involved in the theft of several pieces of jewelry from a Maalaea store last month. The theft of the jewelry, valued at more than $1,000, occurred at about 4 p.m. Oct. 6 from the U‘i Makana store in Maalaea Harbor Shops. Police said the males, who were seen on surveillance photos, are friends who may have been staying or dining nearby. Anyone with information on the males or the theft is asked to call the Maui Police Department at 244-6400 and to refer to police report 18-042093. Calls also can be made to Maui Crime Stoppers at 242-6966. Callers to Maui Crime Stoppers remain anonymous and are given a code number. Crime Stoppers pays cash rewards of up to $1,000 for information leading to the arrest and indictment of people responsible for felony crimes; the recovery of stolen property; seizure of illegal drugs in felony cases; or the capture of felony fugitives.

Maui’s Billy Kemper competes during the first round of the Jaws Challenge on Monday at Peahi. WSL Kenneth Morris photo

Keala Kennelly of Kauai drops down the face of a wave during the semifinals of the Women’s Jaws Challenge on Monday at Peahi. WSL / Richard Hallman photo

Stephanie Gilmore of Australia celebrates after clinching her seventh world title during the second round of the Beachwaver Maui Pro on Monday at Honolua Bay. WSL / Ed Sloane photos

Summer Macedo of Lahaina surfs in the first round.

Mark Healey of Hawaii pulls into a massive barrel at Jaws in Peahi on Monday at the 2018 JAWS Challenge. Surf of 30 to 40 feet was reported on the north shore on Monday with a high-surf warning in effect for north-facing shores on Maui until 6 p.m. today. WSL / KENNETH MORRIS photo