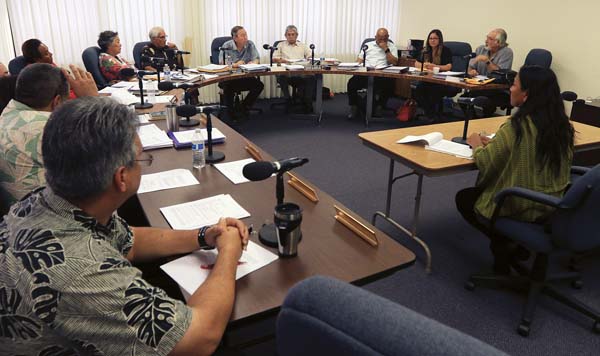 The Maui County Liquor Control Commission, shown during its October meeting, came under fire in an audit, commissioned by the County Council. The audit said that the commission is not fulfilling its oversight duties of the Department of Liquor Control. The Maui News / CHRIS SUGIDONO photos

A recently released Maui County Council audit of the county Liquor Control Department and the commission that sets policy says they are operating in an “inconsistent and arbitrary” manner and “not fulfilling . . . mandated responsibilities.”

The audit, which was authorized by the County Council in February and released publicly on the council website, recommends that the mayor and council consult with county attorneys to amend county liquor rules to permit them more oversight of the liquor department and commission.

The department and commission have come under fire in the past two years for making major rule changes, such as allowing 24-hour sales of alcohol without proper notice, and for burdensome requirements for one-time nonprofit fundraising events.

The public outcry led to the reversing of most of these rule changes. The audit pointed out that the mayor and council had no power over the department or the commission in these complaints.

The department administers liquor licenses and permit applications, site inspections and enforcement of liquor laws. The liquor commission, appointed by the mayor and approved by the council, oversees the department and adopts rules for liquor control and carries out state liquor laws. 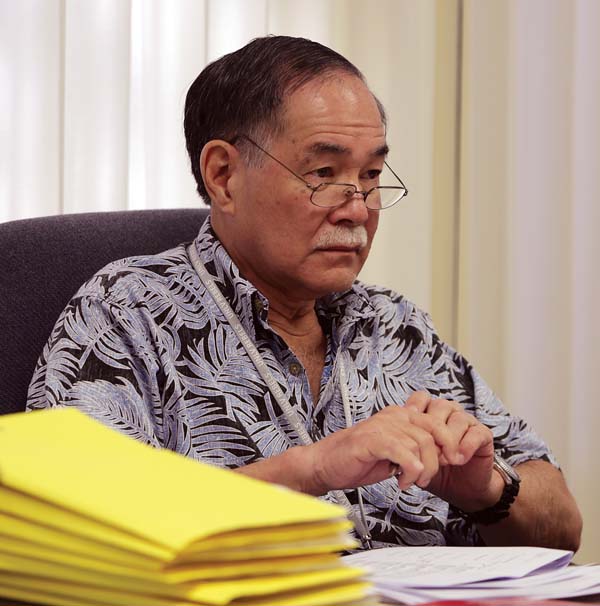 GLENN MUKAI – His review is questioned in audit

The audit, performed by California-based Harvey M. Rose Associates LLC, will be discussed at 9 a.m. Monday in the County Council’s Policy, Economic Development and Agriculture Committee in Council Chambers.

The lack of communication with the public on policies and rules and the “above average” evaluation of department Director Glenn Mukai, who was the target of public criticism for controversial rule and policy changes, were among the criticisms levied in the audit.

For example, the police were not consulted when the commission looked to allow 24-hour liquor sales, removal of the cap on total hostess bars and alcohol delivery to homes.

“Without an adequate consultation process, the department is more likely to implement rules that conflict with the needs of county residents and key stakeholders,” the audit said.

The commission is not fulfulling its oversight duties, the audit said, pointing to poor attendance by commissioners. On the evaluation of Mukai in January, the audit said it appears “to be at odds with the current director’s performance.”

The audit also took the Department of Corporation Counsel to task for not providing the commission adequate guidance.

Regarding department operations, the licensing and permitting processes require more information from applicants than other counties and the necessity of that additional information is unclear, the audit said. Licensees say that application requirements change from year to year without notice and that instructions and license and permit application forms are limited on the website.

In addition, the audit said that department staffing levels are high relative to liquor departments in other Hawaii counties, particularly in the licensing and permitting section.

On enforcement, the department is not appropriately focused on activities that reduce alcohol-related risks, and many licensees perceive enforcement as overly punitive and retaliatory, the audit said.

Some recommendations offered include:

≤ Having the director undergo an annual customer satisfaction survey of licensees and the general public and sharing the results with the commission.

≤ Eliminating the requirement that applicants meet personally with department staff to obtain application materials and to make that meeting optional.

≤ In-depth training for the director and commission members on the Sunshine Law and other county rules and state laws.

In an email response to the audit Wednesday, Mukai said that “the department appreciates any independent audit, which provides invaluable and unbiased insight of the department’s operations and any recommendations that will result in improved effective and efficient services.”

Mukai noted that the scope of the audit covered periods beyond his time as director. He became director in 2016 after an eight-month hiring process triggered by the retirement of former Director Frank Silva. Mukai is also a former deputy director of the department.

Mukai said “the department disagrees with parts of the auditor’s finding and others lack context” but did not elaborate.

He said some of the recommendations have been adopted, are in the process of being implemented, require consultation with public employee unions or involve changes to state and county laws and commission rules.

Commission Chairman Robert “Bob” Tanaka could not be reached for comment Wednesday.

Council Member Yuki Lei Sugimura, who requested the audit in light of news coverage of the abrupt changes in liquor rules and the outcry from the community, said Wednesday that the audit report is long-awaited and is something the community has been requesting.

“But the most important thing, what people are looking for, are the recommendations that are coming out from the audit,” Sugimura said.

“Personally, I hope we can have a review of the (liquor control) rules” and provide more clarity and transparency, she said.