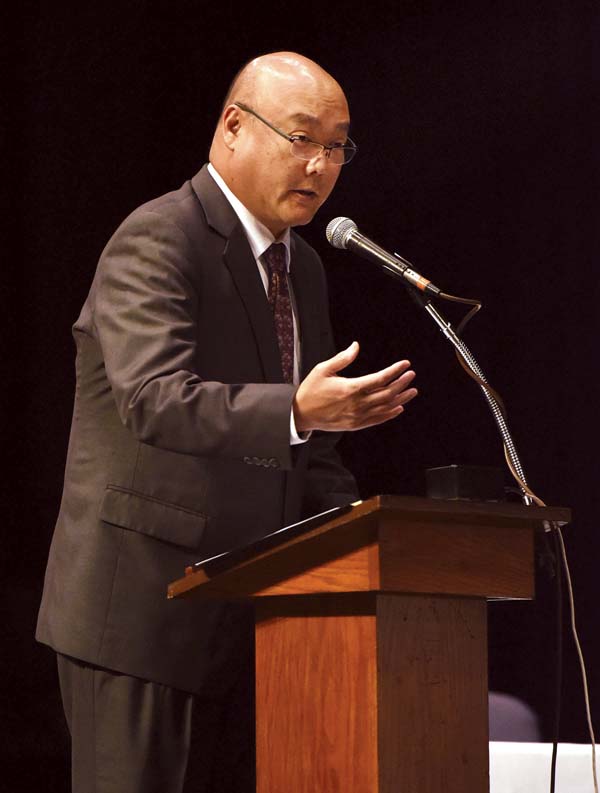 Deputy Prosecutor Richard Minatoya addresses the Hawaii Supreme Court in the Baldwin Auditorium in Wailuku in August 2017, when the high court heard a Molokai drunken-driving appeal as part of the Judiciary’s Courts in the Community outreach program. The Maui News / MATTHEW THAYER photo

Minatoya, 51, suffered a heart attack, Kim said. He is survived by his wife, Setsuko Minatoya.

He was in charge of the appellate and asset forfeiture division of the department, which handles appeals, post-conviction petitions and federal habeas corpus cases. The section also provides in-house training and tracks legislation.

Minatoya was named a board member in July 2017 for the National District Attorneys Association, a focal point for prosecutors to advance their causes and issues at the national level.

He also was a member of the Kiwanis Club of Kahului, University of Southern California Alumni Association, Maui Filipino Chamber of Commerce and Maui 442nd Veterans Club.

Minatoya came to Maui from Kauai in February 1999 and served in two stints on the island in both the departments of Prosecuting Attorney and Corporation Counsel. His first position in Maui County was as a deputy prosecutor; he moved to the Corporation Counsel Department in January 2000 before returning to the prosecutor’s office in July 2002.

In 2003, Minatoya moved back to Kauai and entered private practice, before becoming first deputy prosecuting attorney on Kauai, the second in command in the office, in 2005.

He returned to Maui in December 2006, taking a position as a legal assistant. In January 2007, Minatoya filled an open deputy prosecutor slot and served in that position until his death Sunday.

He had a bachelor’s degree in economics from the University of Southern California and received his law degree in 1992 from the William S. Richardson School of Law at the University of Hawaii, a news release about his National District Attorneys Association appointment said.

“He served with distinction, taking on every task asked of him by the Prosecuting Attorney,” said Kim on Monday. “He had a keen sense of justice, he was a dedicated public servant, and he did not suffer fools. He had strong opinions formed by values taught to him by his family.

“We will greatly miss his opinions and laughter.”