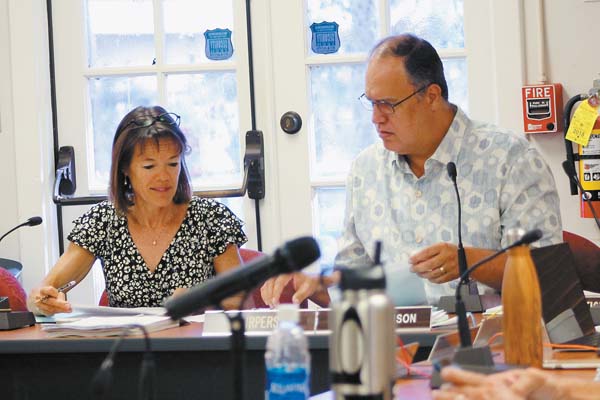 Planning Director Michele McLean (left) and Maui Planning Commission Chairman Keaka Robinson review a bill at a commission meeting Tuesday that would make a proposed $20,000 fine for illegally operating short-term rentals into law. Voters approved the new fine on Nov. 6. A bill must go to all three county planning commissions and then to the Maui County Council before the new fine can become law. The Maui News / COLLEEN UECHI photos

When she first got a permit to run a short-term rental on her 20-acre coffee farm in Makawao, Sydney Smith was required to put a sign on her property to inform the neighbors.

But since she started operating, the sign has been stolen three times. And each time, the lack of a sign meant Smith was technically violating her permit.

“The last time I put it up, I put it on two kiawe posts in concrete,” Smith said. “It would take a chain saw and a couple of big braddahs to help get it off that. But still I was in violation every time that sign was stolen.”

It’s one of the many reasons why Smith and other short-term rental operators are cautioning county officials as they prepare to turn a $20,000 fine for illegal short-term operators into law. On Nov. 6, voters approved a County Charter amendment that would increase the fine for illegal operators from $1,000 to $20,000 initially and $10,000 every day of violation after that. The next step is for the Maui County Council to approve a bill that would make it into law.

However, some residents like Smith were concerned when they saw the bill drafted by the Planning Department, which would not only punish illegal operators with the $20,000 fine, but also levy the same fine on any short-term rentals, bed-and-breakfasts and conditional permit holders who violated the terms of their permits. The draft bill came before the Maui Planning Commission on Tuesday. 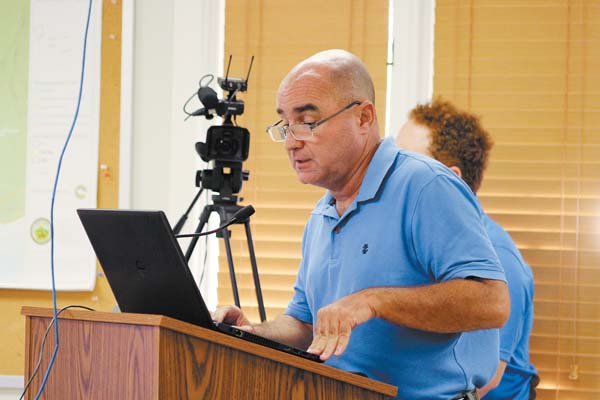 Administrative planning officer David Raatz explains the process of turning the voter-approved $20,000 fine for illegal rental operators into law. Raatz said the department was open to making changes to the bill based on public feedback.

Administrative planning officer David Raatz said that the department was open to changing the bill to allow a fine “up to $20,000,” instead of requiring that all fines be the same. He said the department was also open to removing the sections that penalized legal operators who violated their permits with the same $20,000 fine.

Rental operators like Smith said they would not knowingly risk losing the permits they worked so hard to get.

“All the permit holders that I know would not knowingly endanger their permit or break the law, but it’s possible to unknowingly do it,” Smith said.

Many of those violations occur when booking websites or places like Craigslist run ads without the operator’s knowledge and don’t label those ads with a proper permit number.

Huelo bed-and-breakfast operator Sharyn Stone said that she tried running ads on booking.com for six months before realizing she had “made a deal with the devil.” She said the travel website continues to run her ads even though she has asked them to take it down, as do several offshoot websites of booking.com. She said if people tried to make a reservation with her bed-and-breakfast on one of these websites, they would be told those dates were unavailable and be advised to look for alternatives.

“They refuse to take down those listings,” Stone said. “Those listings do not have permit numbers. Booking.com will not acknowledge these listings even exist despite being sent screenshots showing they do. They tell me there’s something wrong with my browser. Now I may be a techie idiot, but I’m not that stupid.”

Stone said that if the proposed bill were passed in its current form, “these would be officially punishable violations, and of course, I’d be running out of money really fast.” She said she’s all for enforcement but doesn’t believe in a “one size fits all” solution.

“So please limit the $20K and $10K thing to unpermitted operators only,” Stone said. “And find a different, specific, fair, helpful way to deal with any perceived violations from legal operators.”

Will Spence, former planning director and current director of Housing and Human Concerns, said he felt obligated to come forward because the bill “isn’t what I voted for” nor what the council originally intended when it sent the charter amendment to the ballot. He also advocated for treating violations on a case-by-case basis and not applying an across-the-board fine.

“People really are protective of their permits,” said Spence, who testified as an individual. “If they’re in violation and they continue to violate, there are already provisions in the law that those permits can be revoked.

. . . Losing your permit and not being able to apply again for a considerable amount of time, that’s a pretty big hammer already.”

Planning Director Michele McLean said that she was fine with updating the bill so that it would apply only to unpermitted operators. However, she added there are concerns about operators who get a permit and then turn their operation into something completely different than what they promised.

“That kind of thing is more in line with an unpermitted operation,” McLean said. “But certainly those are few and far between, and it would be better to deal with those in their own way and not penalize those who have permits and are doing their best to comply with their permit terms.”

The commission’s recommendations to the council echoed public testimony — that the county could issue a fine “up to $20,000” and that they not apply to permitted operators, who would still be subject to the current $1,000 penalty if they violated their permits.

Raatz said Tuesday that he wasn’t sure whether the bill could get enacted by Jan. 2, when the council is inaugurated. If not, he said the goal is to get it passed shortly after.

Award-winning recording artist Cyril Pahinui is shown playing in Hilo in this undated photo. The longtime musician was known for his technical virtuosity, rhythmic adaptations and instrumental harmonics. He also passed along his knowledge to many other entertainers, and often taught slack key guitar to students at the University of Hawaii at Hilo. Photo courtesy of Cyril Pahinui family

Administrative planning officer David Raatz explains the process of turning the voter-approved $20,000 fine for illegal rental operators into law. Raatz said the department was open to making changes to the bill based on public feedback.

Planning Director Michele McLean (left) and Maui Planning Commission Chairman Keaka Robinson review a bill at a commission meeting Tuesday that would make a proposed $20,000 fine for illegally operating short-term rentals into law. Voters approved the new fine on Nov. 6. A bill must go to all three county planning commissions and then to the Maui County Council before the new fine can become law. The Maui News / COLLEEN UECHI photos

Coaches of teams in this week’s Maui Jim Maui Invitational, including Duke’s Mike Krzyzewski (third from left), pose next to surfboards during a press conference Sunday at the Hyatt Regency Maui. The Maui News / ROBERT COLLIAS photos