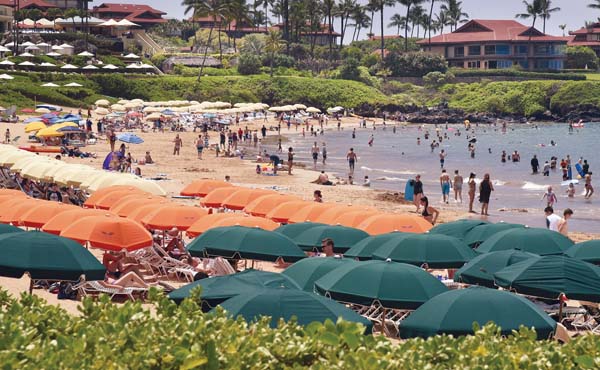 Sunbathers enjoy the day on Wailea Beach in September. Even with the drop in hotel revenues, Wailea hotels and resorts continued to perform at the highest levels in the state . . . just not in their usual double-digit fashion. -- The Maui News / MATTHEW THAYER photo

It could be a statistical blip or a sobering reminder of the vulnerability of a single-industry economy.

Or, it could mean nothing.

Maui County’s revenue per available room — a measure of hotel profitability — dropped 1.4 percent to $217 in October compared with the same month a year ago, according to a monthly hotel performance report issued this week by the Hawai’i Tourism Authority.

The last time there was a decline in what the authority calls RevPAR was in January 2016 when the decrease was 2.8 percent, then the result of an average daily room rate drop of 3 percent and flat occupancy, according to Jennifer Chun, director of the authority’s tourism research.

When asked via email if the revenue-per-room reduction was tied to a lingering effect of Tropical Storms Lane and Olivia in August and September, Chun said it was too early to tell because the authority was still putting together visitor statistics for October, set for release Thursday.

Then, “I will have a better idea about origin markets or purpose-of-trip declines for Maui, Molokai and Lanai,” she said.

Looking at regional hotel performance, Chun pointed out that “Wailea did well in October, and Kaanapali-Lahaina-Kapalua was not so great.”

Wailea hotels and resorts continued to perform at the highest levels in the state, but not in their usual double-digit fashion. Revenue per available room in Wailea rose 9.3 percent to $383.02. (In September, Wailea’s RevPAR was up 11.2 percent to $363.50, compared with the same month a year ago.)

Wailea’s occupancy rates went up 6 percentage points in October to 84.2 percent, and its average daily room rate was up 1.5 percent to $454.90.

Overall in October, Maui County saw its occupancy rates fall 4 percentage points to 70.9 percent. Its average daily rates were up 3.8 percent to $306.66.