Candidates reflect on the green that oils political campaigns 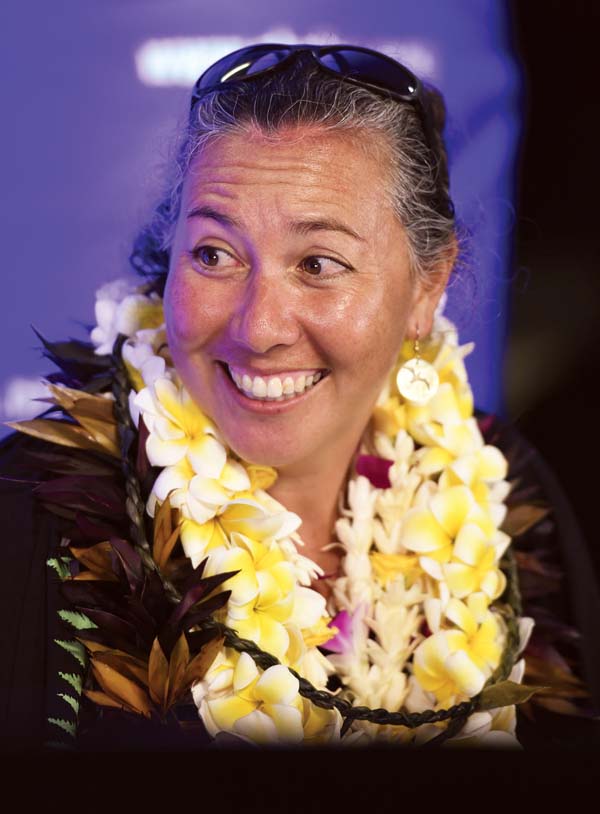 County Council Member-elect Tamara Paltin appears on an Akaku Maui Community Media telecast Tuesday. After losing her first try at politics in 2014 to Mayor Alan Arakawa, Paltin decided this year not to limit contributions to $100 or less. But, she did not take donations from corporations, like Alexander & Baldwin. This year, she defeated Rick Nava for the council’s open West Maui residency seat. -- The Maui News / MATTHEW THAYER photo

When an unsuccessful campaign for mayor left her with a deficit of nearly $2,500, Tamara Paltin began to reconsider the rule she’d imposed on herself going into the 2014 campaign — no donations of more than $100.

“A lot of feedback I got from the first run was don’t self-limit to $100, but I still wanted to self-limit myself in some ways to distinguish I’m not in it for all the money,” Paltin said.

In her next bid for office, Paltin started accepting larger donations — though she barred herself from taking corporate money — and saw a marked improvement in her finances. Going into this year’s general election, she had a surplus of more than $9,000 and went on to defeat Rick Nava, who had a deficit of about $5,000.

“It definitely gets you access to a lot of voters, the more money you have,” said Paltin, now the council member-elect for West Maui.

Paltin recognized the dilemma that some candidates face leading up to Election Day, particularly against well-funded opponents. At what point can candidates draw the line on donations and still be successful? And, how much does funding impact a campaign?

For candidates, money matters, especially if they’re not well known, said Colin Moore, director of the Public Policy Center at the University of Hawaii.

Moore said candidates with bigger financial support like to raise a lot of money “to scare off challengers,” who realize that no matter how compelling their message is, they can’t get the votes if no one knows who they are. And, Moore said, “folks who give money want to back a winner.”

The art of compromise

As she geared up for this year’s campaign, Paltin found ways to improve her funding while preserving her integrity. She accepted larger checks. She agreed to donations from unions that she believed “really support their workers as opposed to telling their workers who to vote for.” She took donations from off-island and out of state, but typically from family or people she knew personally.

“The labor unions that I did accept money from, we had thorough conversations, and I think we built a level of trust where I felt comfortable taking the money from them,” Paltin explained. “And we made it clear on both sides that this doesn’t mean that you’re going to tell me what to do. You support me and what I stand for, and I support you guys, and we want to keep the lines of communication open and work together.”

Paltin accepted donations from local businesses — like the surf shop her friend owns — but drew the line at corporations, like Alexander & Baldwin. (Defining a “corporation” was tricky at first, Paltin admitted. In her view, that meant organizations beyond small businesses, with large-scale operations that call for chief executive officers, boards of directors, etc. She clarified that she did accept money from a T-Mobile employee who is a friend and donated as an individual.)

Many of Paltin’s donations still remained on the sub-$500 side. However, some of her larger contributions included $2,000 from Unite Here Local 5, the union representing hospitality workers statewide; $2,000 from former lieutenant governor candidate Kim Coco Iwamoto; and $1,000 from retired Wailea attorney Mark Hyde.

Paltin admitted she was a little hesitant about getting money from some super PACs, which are not required to disclose their donors. She knew and agreed with the mission of S.A.F.E. (Sustainable Action Fund for the Environment), the super PAC that funded many of the mailers supporting ‘Ohana Coalition candidates like Paltin. However, she was less comfortable with the Honolulu-based One Ohana PAC that endorsed her. Candidates can’t interact with super PACs and don’t have a say in which ones endorse them.

“You don’t really know too if their thing is meant to help you or hurt you because there’s no coordination,” Paltin said.

For Paltin, it’s all about giving the right impression. For example, she turned down a donation from a developer whose project she supports but may have to vote on one day as part of the council.

“I just didn’t want to give the impression that they gave me money, and I support the project,” she said.

Overall, the increase in funding began opening more doors for Paltin. It was easier to afford banners and signs, and radio and TV ads if she wanted. She could reserve a spot or purchase a table at events with lots of voters, such as the 4th of July parade or the Maui Economic Opportunity senior banquet. She still dreads asking for money but realizes it gets her in the door.

Going into a race with an incumbent, Hannibal Starbuck had a steep hill to climb. He had never run for public office before, and his opponent, Upcountry Council Member Yuki Lei Sugimura, had a major advantage in funding.

“I felt like I was able to put out my message fairly well with just that limited amount of money,” Starbuck said. “I couldn’t afford any radio ads and mailers, but I thought I had enough banners and signs and shirts as well.”

Starbuck, who lost to Sugimura by a final tally of 27,250 votes to 17,218, said there were “a couple of missed opportunities,” including radio, TV and newspaper ads, and events that he couldn’t RSVP for because he lacked the funding. He also didn’t do any fundraisers, since he wasn’t sure the costs would be worth it.

“There were some times that, if I had more money, I probably would’ve done a couple more things,” he said. “Part of my learning experience was you need to ask for help in these things, and part of it was I was trying to take a lot of the responsibility on myself. I see more successful campaigns do have a team.”

Starbuck said he didn’t put any limits on himself as far as funding went, but it also wasn’t much of an issue for him. Most of his donations were under $500, and no individual donor went beyond $2,005 in total. He also didn’t have any offers from major developers or corporations.

When asked how a candidate with a funding disadvantage can run competitively, Starbuck said “that’s the million-dollar question right there.” He pointed out that candidates who won with fewer funds had experience and support from past campaigns. He added that in-kind donations helped him, like the Facebook and Instagram ads that Kula residents Michael Williams and Linda Love created for him and other ‘Ohana candidates.

“My resources were pretty bare bones, but I’m happy with 17,000 votes,” Starbuck said. “I don’t think that’s anything to be ashamed of against an incumbent who’s well liked in the community.”

When asked how successful are candidates who refuse donations from corporations or special interests groups, Moore said “they’re usually not.”

“They can be, but that’s why we focus on those unusual stories when they manage to be victorious,” he pointed out.

Moore said that candidates “have to make up for their lack of money with discipline and hard work.”

“In small races, you can do that,” he said. “When you’re talking about statewide races, it’s virtually impossible. . . . Even people who come up in the local system and say they’re not going to take big donations and not work for the PACs, I think when they try to get onto one of those higher-level offices, they decide they have no choice. They don’t like it, but they realize that they can’t be competitive.”

Moore said that if a candidate runs a few times and gets his or her name out in the public, “an effective network of volunteers and small donor strategy can work. But it’s a rough path.”

In response to the same question, Paltin said it “depends if they’re a first-time candidate or not.” She said that the limits she set during the 2014 race were maybe something a candidate could do “once you’re established earlier, but it’s hard to do that as a new candidate.”

As an underfunded candidate in 2014, Paltin said that her strategy was to target opponent Mayor Alan Arakawa’s own funding. The incumbent had a surplus of about $275,000 in the month after the election.

“My strategy was to make that be the issue,” she said. “Why are these people giving him that much money? What do they expect in exchange for it?”

Moore said it’s a strategy that can prove effective.

“Voters are very suspicious, and they dislike the amount of money in politics,” he said, though he added that “voters often think it’s more corrupt than it really often is.”

While donations don’t always guarantee an elected official will deliver his or her support, it can help ensure that a candidate will answer a donor’s phone call and dedicate time to the donor’s issue.

“Money doesn’t buy votes, but it does buy access, and access is a very important thing,” Moore said.

A number of candidates with less funding did succeed on Tuesday. Natalie “Tasha” Kama, who had a surplus of $1,098.36 before the election, won the Kahului council seat over sitting Mayor Arakawa and his surplus of $44,146.16. Repeat candidate Shane Sinenci won the East Maui seat while raising less than half of what opponent Claire Kamalu Carroll did. Lanai candidate Gabe Johnson came within 2,000 votes (4 percent) of incumbent Riki Hokama, who wielded a surplus of $59,329.12 to Johnson’s $1,733.60.

Moore said the dilemma that candidates face in bridging the spending gap is likely an argument for more public money in elections. Some governments offer matching funds if candidates can raise a certain amount. Hawaii has a partial public funding program for candidates, but “it needs to be rethought so candidates have an easier time taking advantage of it,” Moore said.

Ultimately, Moore said, “I’ve never thought the problem was money in politics. It’s just that the money comes from a small number of groups.”