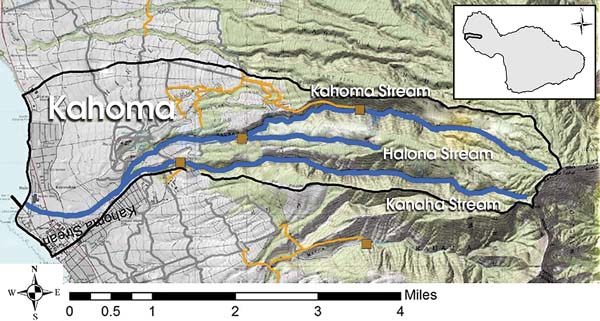 This map shows the Kanaha Stream, which flows into the Kahoma Stream in West Maui. The state Commission on Water Resource Management set in-stream flow standards for both streams last week.

The county Department of Water Supply, which has been diverting most of the water from the Kanaha Stream for its West Maui customers, will have to return 550,000 gallons a day to the stream, following a decision last week by the state water commission.

A stream diversion feeds water into the department’s Lahaina treatment plant, which produces 1.65 million gallons a day, as well as Lahainaluna High School and one other small individual user. The decision by the state Commission on Water Resource Management last week indicated that the county intends to develop a new groundwater source in five years or sooner to relieve the draw on the stream.

This will allow for restoration of the full in-stream flow standard of 1.55 mgd, the commission report said. Currently, the stream is dry below the department’s diversion.

The commission set the in-stream flow standards for Kanaha and Kahoma streams in West Maui at its Nov. 20 meeting. Kahoma Stream, and its tributary Kanaha Stream, both were diverted in the late 1800s to irrigate sugar cane fields on the west side.

Restoration efforts on Kahoma Stream began several years ago, with Kamehameha Schools abandoning its diversion at the 650-foot level and restoring the majority of water to the stream in 2011 from its diversion at the 1,850-foot level. The latter action was in coordination with community-organized efforts to restore traditional kalo loi (taro patches) in the area. The report noted planting and harvesting of kalo from new loi that have sprung up as a result of the stream-flow restoration.

The commission approved an in-stream flow standard of 3.49 mgd below the Kamehameha Schools’ diversion, which is the estimated stream flow 70 percent of the time and is sufficient to support complete habitat restoration. The flow standard also should allow Kahoma Ranch to meet its 113,000 gallons a day nonpotable water demand from the stream diversion at least 65 percent of the time, the report said. The ranch offers ecotourism with ATV tours, zip-line adventures and swimming, the report said.

The diverted water is piped to a distribution box at the 790-foot elevation and sent to the water department treatment plant, Lahainaluna High and the old mill, the report said.

The estimated median flow of the stream is 3.17 mgd, and 720,000 gallons per day is needed for continuous flow from the diversion to the confluence with Kahoma Stream, the report said.

The restored flow also could restore agriculture to 16.5 acres in the valley with about 3.3 acres potentially available to kalo loi, the report said.

Recognizing current demand, the commission approved a phased implementation of the in-stream flow standard. Initially, the county must release 550,000 gallons per day past its diversion, with additions of 130,000 and 120,000 gallons per day to meet additional kalo loi being planted and supplying continuous flow in Kanaha Stream.

“With the restoration of stream flow to Kahoma and Kanaha Streams, we sincerely hope that the communities and families of Kahoma Valley and Lahaina will continue to see the return of stream animals and cultural practices, along with the abundant educational opportunities that exist, while allowing for continued important off-stream domestic and agricultural uses in a balanced manner,” said commission Chairwoman Suzanne Case.

For more information, go to dlnr.hawaii.gov/cwrm/surfacewater/ifs/kahoma_ifs/.