In a historic first, women take the majority of the next Maui County Council 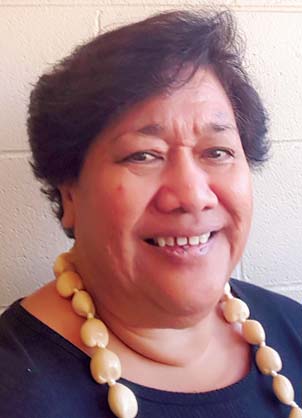 Women will make up the majority of Maui County’s governing body for the first time in its 114-year history.

Six women and three men will enter the County Council when business begins on Jan. 2. The council began in 1969, and it was preceded by the Board of Supervisors in 1904. In all of its history, it has never had more than four female members in a council term of office.

“It’s historic,” said Kate Griffiths, chairwoman of the county Committee on the Status of Women, on Thursday. “We’ve never had this done before.”

She noted that a female ran in every council race (except the Lanai residency seat), and women won 75 percent of those contests, six out of eight. 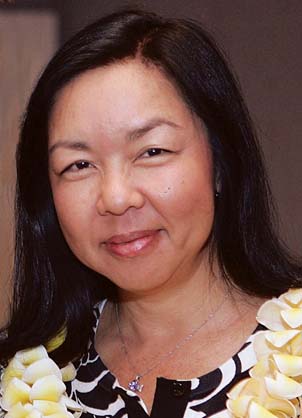 Women leaders across the county took notice of the female majority council, including the founder of the worldwide Women’s March in January.

Hana resident Teresa Shook, who inspired the movement that spurred more than 500,000 people to march on Washington, D.C., and millions more across the globe, said she followed the county election results and was “really excited” to see the number of female candidates.

“The wave of women elected throughout this county is phenomenal,” Shook said. “I think we’re going to see a different kind of leadership. In Maui and Hawaii, I think we have a strong precedence for women leadership so I’m thrilled to see this take place.”

A history of firsts 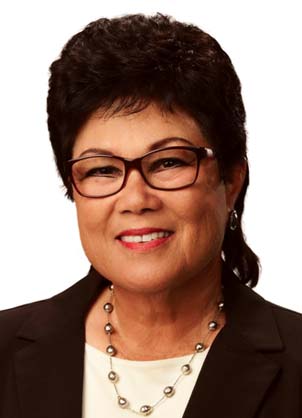 Hawaii politics, like much of America, has been dominated by men for the past century.

It took more than 30 years for the first woman to take office, and that only occurred because her husband died the day before the primary election, according to a column, “The Maui Scene,” published Nov. 17, 1954, in The Maui News.

Jessie Ross Crowell, a Maui Memorial Hospital nurse, stepped in for her husband, Clem Crowell Jr., after the board appointed her on Oct. 15, 1938, to complete his unexpired term. It took another 17 years for the first woman to be elected in what was characterized as a tense campaign, according to the column.

Caroline K. Rodrigues defeated Kenny Auld for a newly added Molokai seat and was sworn in on Jan. 3, 1955. 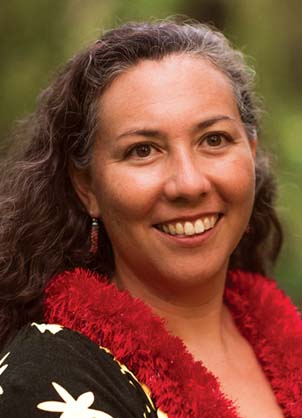 Doris K. Yamaguchi became the first County Council woman after her husband, Yoneto, died on June 23, 1973. She was selected to replace him and was sworn into office the following month.

Yamaguchi proved herself in the next election, though, winning a full term and serving on the council until her retirement at the end of 1976. Then Vice Chairman Manuel S. Molina described Yamaguchi in a resolution as a “dedicated” and “conscientious representative,” and he thanked her for her “outstanding services to the people of the County of Maui.”

The early female lawmakers helped pave the way for future women as more ran for office throughout the 1980s. Former Maui mayor and Hawaii Gov. Linda Lingle began her political career on the council in 1981 and was joined by Velma McWayne Santos two years later.

Lee, who is returning to the council next year, began her career in 1989 alongside Lingle and Santos. While Lingle moved on to become the county’s first female mayor, Lee was selected as the first woman council chairperson in 1995.

A few women would rotate onto the council over the next decade until four were elected in 2016. Current Council Members Elle Cochran of West Maui, Stacy Crivello of Molokai, King and Sugimura were one member shy of a female majority. 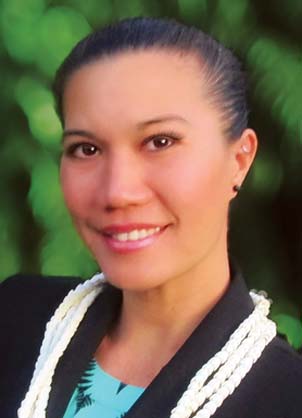 Lee recalled her early years on the council, including her single term as chairwoman when she was the lone female. While she said she believes the council could have greatly benefited from more female voices, she admitted that it was not a primary concern at the time.

“I didn’t really think about being the only woman because you have the work in front of you,” she said. “Because in reality, the council is one of the few occupations where there’s equality. It’s really up to the female to run. No one is stopping any woman to run for council and once you’re elected, everyone is treated equally. Equal work for equal pay.”

Despite having equal power to her male counterparts, Lee said there were subtle things council men would do to undermine women. She said they would sometimes run in groups, “like little packs and behave like kids.”

“Guys would openly make offensive remarks about women,” she remembered. “That was kind of accepted at that time. Not anymore. You could lose your job if you’re loose with that type of attitude and conduct.” 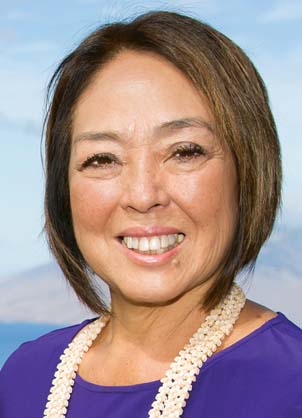 Department of Water Supply Director Gladys Baisa, who served on the council from 2007 to 2016, remembered feeling left out of some discussions and always having to prove herself in her early years. She said she believed the council was imbalanced and should have been 5-4, favoring women, when compared to the population of women in the county. “Remember, I’m a very senior woman, so I’ve lived through the, ‘women should be in the bedroom and not the boardroom,’ “ said Baisa, the only other chairwoman in the council’s history. “I’ve lived through that. Things have changed a lot, and there’s many women leading.

“I think it’s time people recognize women are capable and can do these things.”

Lee also talked about raising a 9-year-old child while making her first run for council. She gave all her female council members credit because she knows it is “doubly challenging” to run a campaign and family.

Lee said her male counterparts grew to respect her because of her confidence and ability to keep her emotions in check. She said she always believed she could be chairperson, but she would have to follow Goro Hokama, who served for more than 40 years on the council and Board of Supervisors.

She said she initially challenged the elder Hokama, which, “of course, wasn’t received too well,” and then fought for the job again after he left to run for mayor.

“It was like, ‘Here comes the only female out of left field,’ “ Lee said. “It got a little tense, but it was never hostile.”

“I’m no shrinking violet,” she continued. “I’m a very no-nonsense kind of a person. Everyone knows that. I get right down to business and that’s how we handle ourselves. I honestly didn’t think it mattered what gender I was to these guys.”

With an unprecedented number of female council members, will gender affect policymaking?

“I don’t believe it’s going to be any different,” Kama said. “But, when we as women talk about issues, we talk from a place of nurturing. We come from a sense of maternalism, and men come from a place of paternalism. Like husband and wife, it’s a team, so we still have to be a team.”

Kama said mothers serve as the “backbone and strength in our families,” which she believes every woman on the new council exhibits. Every female council member has a child.

“We can apply this same tool and unique energy to the council,” she said. “You know that women across our country vote more than men, and I think this is now the voice of women speaking. I think this is going to be a voice that was meant to be spoken for a long time and now they’ve arrived.”

Baisa agreed that women are typically the “social secretary” within the family and work a second full-time job when they come home. While she does not foresee major changes to policies, she acknowledged the strength women generally have over the opposite sex.

“We’re used to multitasking,” she said. “We take things very seriously, and we’re more sensitive. We’re more concerned about how people feel and they’re going to want to affect people positively. But I think our ability to manage time is going to be very important.”

Lee said she believes the female majority council will lead to decisions that are “more reflective of a wider range of interests and basic needs of the broader community.” She added that there may be more enforcement of workplace violence and sexual offenses against women, which she called “absolutely necessary.”

Lee said she hopes to introduce protocols for council members’ staff, who do not follow the same processes as other county employees. She said county departments are subject to very specific protocols when there are incidents of violence or harassment.

“It’s not like you have a choice,” she said. “You must refer it and an investigation is done. At the end, an action is taken, whether it’s dropped or there’s some kind of penalty. But it’s not just left unresolved.”

On a lighter note, Lee said her female perspective helped change housing plans in the late 1990s. She recalled telling a developer to place the kitchen closer to the garage, which would cost no extra money and provide relief to mothers bringing in shopping bags.

“I think they were just looking at the aesthetics, and I was looking at who’s carrying the bags,” she said.

With the new council, Griffiths said she would like to see leadership that is more collaborative and thoughtful. She said women often process things differently than men, so she hopes that will be reflected in housing and social issues.

“Women tend to be forward thinkers and plan ahead, so it would be great to see our leaders making better decisions with regards to sea level rise and development,” she said. “Women are also often the glue that keeps everything together at home. I hope to see this quality in this council. I believe a lot will be achieved when we work together, listen to each other and imua.”

The future for females

The 2018 election proved to be historic for women throughout America.

Shook said the national movement empowered women to run for office and participate in political activism on the local level. She said she is still busy speaking to women and groups nationwide and plans on traveling to Washington, D.C., again in January, possibly to speak.

“People are starting to get educated on how government works, and they’re realizing it starts at the state and county level,” she said. “I definitely believe it had this trickled-down effect on every level. I think more women got involved because they want to see change where they live.”

Griffiths said her committee ran a successful campaign before the election to inspire more women to vote. She said many are directly affected by decision-makers, noting that women and families are the fastest-growing homeless population.

The committee also is working on a resolution to install gender parity on all boards and commissions, Griffiths said. Nineteen out of the 29 county panels have less than 50 percent women representation.

“I think it’s great to have female leaders that can see through a female lens so they raise awareness and help find solutions for them,” she said.

Baisa said she gets “very annoyed” when female role models do a poor job because it brings all women down. She said women are still dealing with the “glass ceiling” in workplaces, but she sees the new council as a step forward for female professionals.

“If you look at the pictures on the wall here, you’ll see how rare it is for a woman to be on the council,” she said of the county building. “Not anymore.”