Japanese tourists, though, seem a bit harder to please 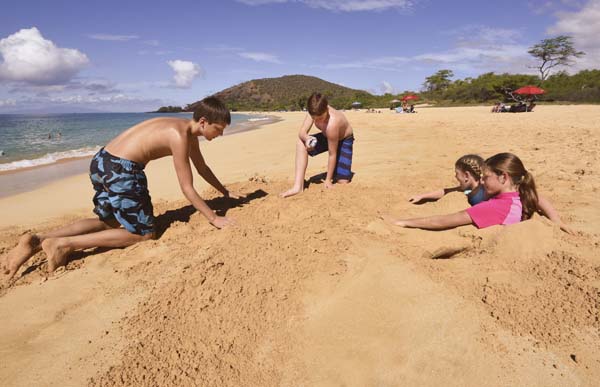 Cousins Grace McNamee, 12, (from right) and Kendall Boehm, 9, are buried in sand at the water’s edge Friday at Makena’s Oneloa Beach, or Big Beach, while their brothers, Ryan Boehm, 12, and Luke McNamee, 13, try to build a water trough so they will be splashed by an incoming wave. The Boehms are from Washington state while the McNamees hail from Minnesota, where it was 20 degrees Friday. “I like how it’s always warm here, and it has a lot of tropical stuff,” Ryan said when asked what he enjoyed about Maui. -- The Maui News / MATTHEW THAYER photo

Maui received mostly rave reviews from visitors regardless of their origin, although Japanese tourists apparently were harder to please, according to a second-quarter visitor satisfaction study prepared for the Hawai’i Tourism Authority.

Just under 69 percent (68.7 percent) of visitors from Japan who completed a survey rated their recent trip to Maui as “excellent.” Another 28.7 percent reported their trip was “above average,” and 2.6 percent said it was “poor.”

Canadian visitors gave the Valley Isle an “excellent” rating 89.4 percent of the time; “above average,” 9.6 percent; and “below average,” 0.9 percent. 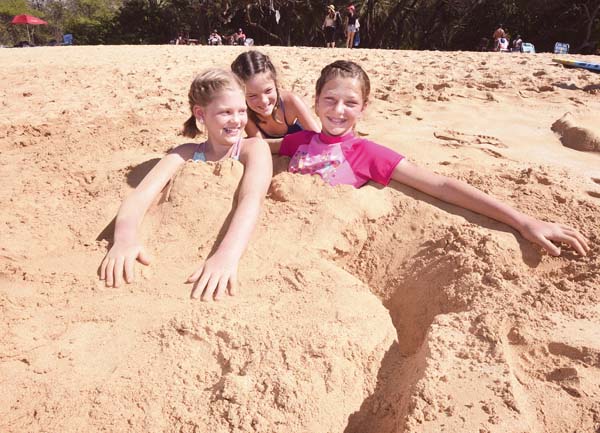 The study reported that, statewide, satisfaction scores were lowest among Japanese, Korean and Chinese visitors. Visitors to multiple islands tended to give higher scores than those who went to only one island.

Statewide, Japan ranked third in the number of visitors who completed the satisfaction survey, 1,147. West Coat visitors completed the most surveys, 1,921, followed by East Coast visitors, 1,784.

The report noted that in 2017, air capacity from Japan increased 8.3 percent to 1,988,036 seats, including the launch of direct air service to Kona from Haneda and Narita airports. Japan ranked third in statewide visitor spending, visitor days and arrivals.

The study reported that geography plays a key role in the likelihood of a return visit, with those from the western region of the U.S. Mainland reporting the greatest likelihood of returning within five years, while European visitors were least likely. Also, more affluent tourists were more likely to return.

East Coast visitors said traveling to Hawaii was either too far or too expensive in the second quarter of this year and last.

First-time visitors and those from the East Coast, Europe, Canada and Korea were more likely to agree that their trips to Hawaii exceeded their expectations.