Fate of Fong land in Keokea now up in the air 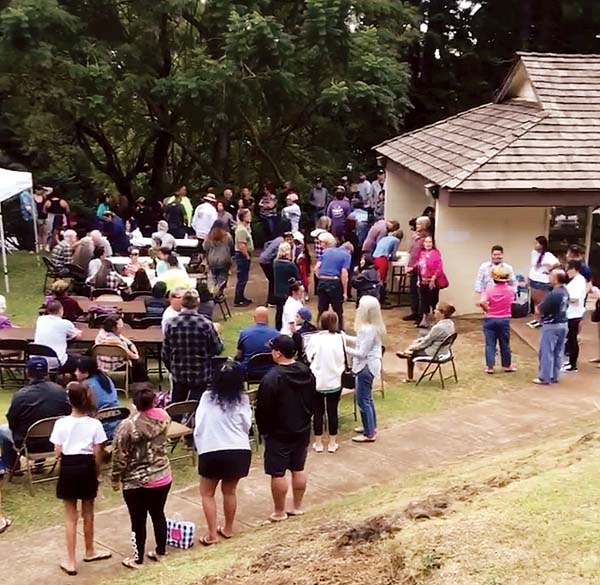 A gathering by the Fong family Saturday in Keokea drew more than 300 people. The family said it is in jeopardy of losing 33 acres of long-held family land in Keokea as well as the land under Grandma’s Coffeehouse and Henry Fong General Store because of a dispute with a neighbor over water meters and a family subdivision.

The Fongs, fixtures in the Keokea community for more than 100 years, said Saturday that they are in jeopardy of losing their land in the Upcountry area, including the site of Grandma’s Coffeehouse and Henry Fong General Store, in a dispute with a neighbor over water meters and permits for a family subdivision.

The family called a community gathering Saturday afternoon at Keokea Community Center to explain their situation. More than 300 people attended.

The Fongs are attempting to develop their 33-acre, 13-lot family subdivision off Cross Road. Before homes can be built on the lots, the county required improvements, such as roads and waterlines, to be put in, said Henry Fong in a statement.

The family obtained a $4 million loan to underwrite the improvements and planned to sell a few of the lots to recover the costs, he said. As part of the loan, the family had to pledge the subdivision and the family land that Fong Store and Grandma’s sit on.

A legal dispute with neighbors, David and Patricia Chevalier, over water meters and other development requirements for the subdivision threatens the family’s ability to sell the lots and recoup the costs of the infrastructure, Fong said.

The Fongs were granted two six-month water meter reservation extensions and another disputed extension to Monday by the county water department. The county has told the Fongs that there will be no more extensions.

On schedule to complete the waterline hookup with approvals by Monday, the Chevaliers filed a temporary restraining order, which was granted by 2nd Circuit Judge Joe Cardoza on Dec. 14.

The Fongs will not be able to meet that end-of-year deadline and the fate of the water meters, the sale of parcels to pay for the infrastructure loan and the ownership of the land are up in the air.

“So if we fail, not only do we lose the 33 acres, we also lose the Fong Store / Grandma’s property,” said Fong. “All of the land will go to foreclosure. This part of Keokea and our family’s history will be gone.”

“While we would much rather keep all the lots, we need to sell some of the lots to pay for the expensive construction improvements,” said Fong.

Tom Pierce, the attorney for the Chevaliers, who at one time owned Blue Hawaiian Helicopters, said Saturday in a statement that the couple has “no ill will towards the Fong family.”

“Similar to the Fong family, they love Keokea’s history and don’t want to see that change,” Pierce said. “They just want to make sure the environmental and archaeological laws are followed and that the Upcountry water meter priority list is administered fairly.

“It is up to the court to decide these issues.”

The dispute arose from an extension that then water director Dave Taylor granted the Fongs. On Sept. 18, 2017, Taylor sent a letter to Henry’s brother Roderick Fong, who had requested a time extension to do improvements on the Kula property. Fong had reserved 11 water meters — eight in 2004 and three in 2005 — and had already been granted “the two maximum allowable six-month time extensions” in each case, Taylor pointed out. Fong’s meter reservations had expired on Dec. 31, 2016.

Taylor granted an extension based on several factors, “including the fact that construction plans were approved by the department, construction of the water system improvements have started, and the construction schedule that you provided to our office.” Fong’s new extension was until Dec. 31.

By then, the improvements must be constructed and pass final inspection, Taylor said, adding that Fong would receive “no further extensions or reinstatements.”

Pierce said in a letter to the Water Supply Department on Dec. 7, 2017, that Taylor did not have the authority to grant the extension, especially given that nearly a decade has passed since Roderick Fong first made his water meter reservations.

Under Maui County Code (section 14.07.090), “a developer must complete water system improvements within two years of making the water reservation, and only two six-month extensions are permitted beyond the two years, and then only upon a showing of good cause,” Pierce wrote.

“The director does not have the authority to reinstate the water meter reservations and grant the developer and property owners of the property more extensions, where, as here, more than three years have elapsed since the water reservations were made — in fact more than a decade,” Pierce said in the letter.

The county had issued a stop work order for the Fongs in March, according to the temporary restraining order petition filed Dec. 12. The stop work order was lifted earlier this month with the Chevaliers contending that the Fongs were being given time to complete work to receive their meters before the end of the year.

The plaintiffs also cited health, historic preservation, cultural and archaeological violations and the need for an environmental assessment for the subdivision.

Judge Cardoza sided with the Chevaliers in granting the temporary restraining order and said that there is a “high likelihood” that cultural sites in the subdivision are not being protected through archaeological monitors. He also ruled that the Fongs may be required to do an environmental assessment and that grading work may be violating Health Department orders.

Further hearings on the dispute with the county and Fongs, who are among the defendants, are scheduled for January and February.

Henry Fong said that the family was two weeks away from completing the work to obtain the water meters when the temporary restraining order was issued.

“It has been a very difficult process, especially for my brother Roderick,” said Henry Fong. “He is a contractor. Not a developer. He tried to complete the improvements himself, but it was a long and difficult process. Anybody who has tried a subdivision knows how hard this process is.”

The 33 acres in Keokea originally was purchased in 1918 by Harry Fong, Henry and Roderick Fong’s grandfather’s oldest brother. Roderick Fong has been working for nearly three decades to subdivide the family land “so that the five children of my father, Danny Fong, can each own parts of the family land individually,” Henry Fong said.

Construction began in 2016 after the Fongs got financing and permits to start. The project was close to completion earlier this year, when the county required the Fongs to renew a grading permit in April. Roderick Fong tried to get the permits renewed but after three months turned to consultants.

“If we did not complete the work by Dec. 31, the county lawyers — and even the mayor — said over and over we will lose our water meters,” Henry Fong said. “We had all our ducks in a row and were on track to meet the deadline of Dec. 31.

“Without water meters, the land value is lost, and we will lose everything.”

Court documents note that the Chevaliers and the Fongs have negotiated for the sale of some of the lots without success so far.

“We appreciate the outpouring of support on behalf of the Fong family,” said Kreig Kihara, son of Henry’s and Roderick’s sister Francene, in a Facebook post. “Many people have asked how they can support our family and the preservation of Keokea town.

“We are currently determining the best course of action.”

* Lee Imada can be reached at leeimada@mauinews.com