A brush fire that began Sunday night threatened Hotel Wailea and forced evacuations. The fire burned about 200 acres but caused no damage to structures or any injuries. The fire was 80 percent contained by Monday afternoon. RAI MOCHIDA photo

With flames from a brush fire visible from her driveway Sunday night, Maui Meadows resident Kristine Kratschmer had bags packed in case she had to evacuate.

“I’ve never seen it that close before,” said Kratschmer, whose rental is near a grass field on the southern end of Akala Drive. “You could hear it. It was pretty loud. And you could definitely see the flames.

“We were pretty close.”

While Maui Meadows residents were allowed to stay in their homes, guests and employees of Hotel Wailea were evacuated late Sunday night as firefighters from six fire stations battled the fast-moving fire that burned 200 acres, officials said. 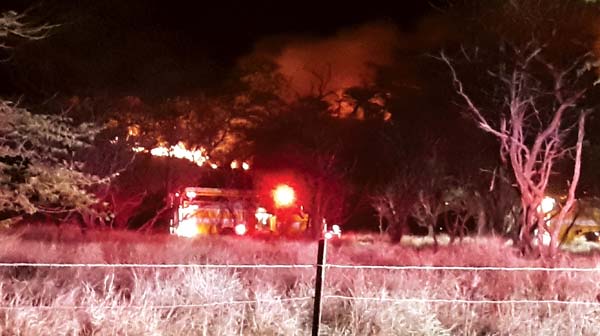 “The Maui Fire Department made significant progress in fighting this wildfire,” he said after inspecting the fire scene Monday afternoon.

No injuries or property damage were reported, officials said Monday.

“Thank God no one was injured,” Victorino said.

Up to 35 people, most of them visitors, sought shelter at the Kihei Community Center, which was opened as an evacuation center at 9:30 p.m. Sunday. By 3 a.m. Monday, most people had left and the shelter was closed later in the morning, officials said.

A water tanker sprays water to douse hot spots in at the end of Kaukahi Street above Hotel Wailea on Monday. A brush fire that burned 200 acres was 80 percent contained as of Monday afternoon. County of Maui / CHRIS SUGIDONO photo

Bud Pikrone, general manager of the Wailea Community Association, said the fire appeared to have started near a Maui Electric Co. substation mauka of Kalai Waa Street on the edge of the undeveloped Honua’ula property.

Maui Electric Co. spokeswoman Sayble Bissen referred questions about the fire to the Maui Fire Department. The Fire Department said the cause was undetermined.

Bissen said about 8,000 customers in the Wailea area experienced a momentary outage at about 6:40 p.m. Sunday.

The Grand Wailea Resort relied on generators before power was restored at about 9:25 p.m.

At 11:15 p.m., about 700 customers were affected when power was shut off to enable firefighters to safely respond to the brush fire, Bissen said. She said power was restored by 11:55 p.m. 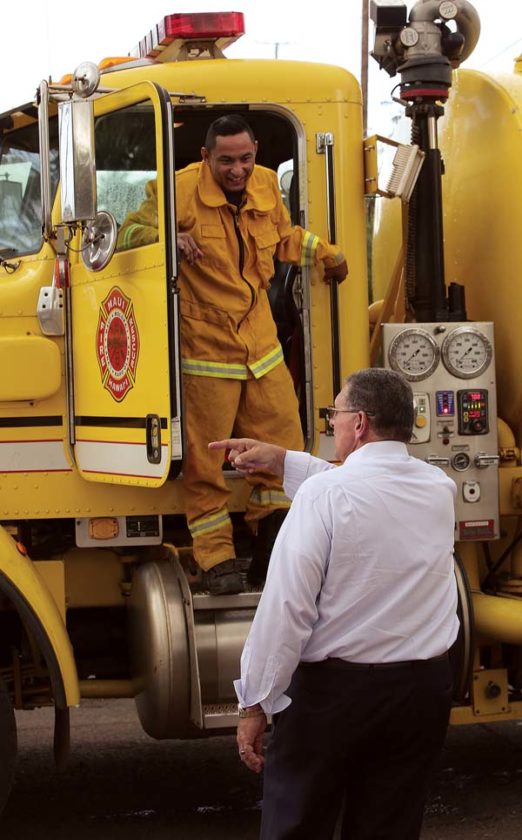 Maui County Mayor Michael Victorino made a site visit to the fire in Wailea on Monday. He spoke with firefighter Dennis Swain at the end of Kaukahi Street. County of Maui / CHRIS SUGIDONO photo

After the secondslong outage Sunday evening, Pikrone, who lives about a mile away from Hotel Wailea, said he walked outside into his backyard with his dog “and saw the glow in the sky.”

He drove to the Wailea Community Association office at Hotel Wailea, arriving at about 7:45 p.m. to check the association baseyard just below where the fire started.

“When I got into the parking lot, you could see the glow from the fire just north of the hotel,” Pikrone said. “It was there, but it didn’t seem to be moving too quickly in that direction.

“The fire at that time was growing a little bit, but it was contained above any of the structures and the baseyard.”

He said the fire went around the association baseyard and a golf course facility “and then started moving south toward the hotel.”

Bulldozers created firebreaks around the hotel, which wet down the edge of its property, Pikrone said.

“We weren’t too worried yet,” he said. “We thought they had pretty much control on everything, though that kind of changed quickly at one point.

“It did get windy, which was unusual,” he said.

Fire officials said conditions at the fire scene Sunday night were “very challenging,” with swirling winds estimated at 15 to 20 mph.

Winds that had fanned the fast-moving flames died around 2 a.m., fire officials said. Firefighters surrounded the perimeter of the fire, allowing brush within to burn itself out. Bulldozers were used to cut firebreaks in critical areas.

Maui Meadows resident Madge Schaefer said she was alerted to the fire after hearing sirens from “so many firetrucks” on Piilani Highway at about 7 p.m. Sunday.

She said the fire was the biggest she has seen in her 23 years at Maui Meadows.

“This morning, it smells like a barbecue pit because of the kiawe,” she said Monday.

After leaving a dinner Sunday night, Rai Mochida said she could see the flames from Wailea Ike Drive across from Wailea Gateway, but couldn’t tell how big the fire was.

She said she talked to people who had been told to leave Monkeypod Kitchen because the fire was getting close.

Kratschmer said she was in Kahului for a birthday party when she began getting text messages from her landlord saying there was a fire. When she got home at about 9 p.m. Sunday, “I could see the red glow,” she said.

She said she couldn’t feel the heat from the fire.

After hearing stories from co-workers about last year’s Lahaina fire, Kratschmer said she packed two days’ worth of supplies in case she had to leave.

She said some neighbors decided to evacuate before an 11 p.m. emergency alert telling residents to be prepared to evacuate if necessary.

“We started to pack up the car, but we waited,” Kratschmer said.

After getting about four hours of sleep, Kratschmer said she awoke at 4:30 Monday morning to “that smoky smell” filling the house.

The 72-room Hotel Wailea was evacuated from 11 p.m. Sunday to about 3 a.m. Monday, with some guests staying at the evacuation shelter and others accommodated temporarily at other hotels.

“All our partners here do a great job of helping each other,” Pikrone said. “Some of the other hotels opened up for their guests to stay.”

Some residents of Wailea Fairway Villas condominiums on Kalai Waa Street evacuated at about 3 a.m. Monday before returning at 6 a.m., Pikrone said.

He said people seemed “pretty calm” as the fire burned Sunday night, with some lined up outside cars to take photos.

“There were people walking around by the golf course and our baseyard to get pictures,” he said. “We had to get out patrol to clear it out because it was dangerous. The fire was right there.”

Pikrone estimated the fire came within 200 to 300 feet of the hotel at its border with the Honua’ula property.

From his office Monday morning, he saw a helicopter dropping water on a hot spot about 100 feet away, as firefighters continued working to contain the fire.

Seven firetrucks, two water tankers and a ladder company responded to the fire, with the response including firefighters from Wailea, Kihei, Wailuku, Kahului, Makawao and Lahaina. Some off-duty firefighters were activated in emergency callbacks.

Rory McIlroy surveys his options after hitting into the deep rough off the the 14th green Sunday. He was able to blast out, but took bogey on the hole. The Maui News / MATTHEW THAYER photo

Alabama‚Äôs Tua Tagovailoa throws under pressure during the second half of the national championship game against Clemson on Monday. The Tigers won 44-16.

Clemson‚Äôs Trayvon Mullen intercepts a pass during the first half against Alabama on Monday in Santa Clara, Calif. AP photos

A brush fire that began Sunday night threatened Hotel Wailea and forced evacuations. The fire burned about 200 acres but caused no damage to structures or any injuries. The fire was 80 percent contained by Monday afternoon. RAI MOCHIDA photo

A water tanker sprays water to douse hot spots in at the end of Kaukahi Street above Hotel Wailea on Monday. A brush fire that burned 200 acres was 80 percent contained as of Monday afternoon. County of Maui / CHRIS SUGIDONO photo

Maui County Mayor Michael Victorino made a site visit to the fire in Wailea on Monday. He spoke with firefighter Dennis Swain at the end of Kaukahi Street. County of Maui / CHRIS SUGIDONO photo

Free lecture at research center ‚ÄúBig-Sun Mercury & the Oceans of Venus,‚Äù a presentation by Guy Jette, ...