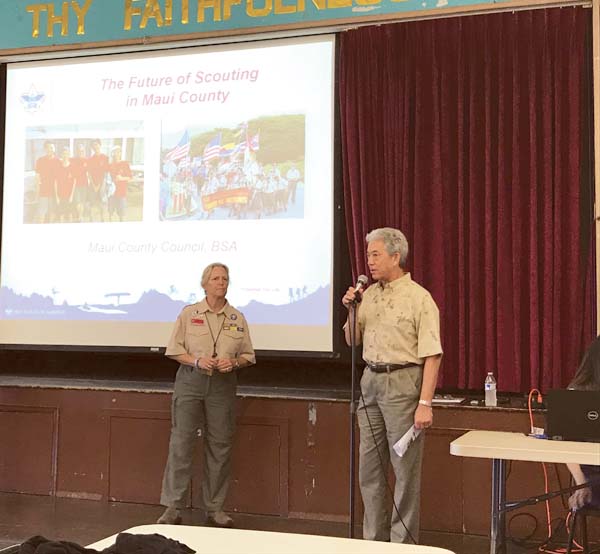 KAHULUI — The Maui County Boy Scout Council will prepare its own budget and have its own executive committee to manage local programs if the century-old council merges with the larger Aloha Council.

However, those attending a community meeting Tuesday expressed concern about representation and finances.

The Maui County and Aloha councils announced the merger proposal last week, which is being driven by the loss of Church of Jesus Christ of Latter-day Saints Scout units at the end of the year. The church nationally will end its century-long partnership with Scouting at the end of the year and will create its own, church-specific youth development program beginning in 2020.

There currently are 853 Scouts in the Maui County Council, which will lose 341 Mormon Scouts at the end of the year.

On the other hand, the Aloha Council oversees 10,500 Scouts on Oahu, Hawaii island, Kauai, Guam and American Samoa.

The merger would allow the Maui County organization to save about $150,000 annually, said Brian Kakihara, Maui County Council president at the community forum exploring the merger Tuesday evening at Kahului Union Church.

Savings would result from the elimination of the executive/chief executive officer position on Maui and from shared accounting services and national service fees.

Another benefit of the merger is that more time could be spent on growing the program and membership, which has never grown much more than 1,000 Scouts, and less on fundraising and administration, Kakihara said.

About 50 Scouting leaders, parents and supporters attended the meeting Tuesday and many wondered how Maui County members would operate in the new council and not be swallowed up by the larger Aloha Council.

Maui County is the only one in the state with its own separate Scout council.

“No way can Oahu or any other island manage the programs on (another) island, day in and day out,” he said. “That has to be done on the own island.”

Under proposed plans, Maui County’s current council would become the Maui County executive committee, which will make local decisions. Local residents will have a say on its working relationship with the Aloha Council, which will offer its administrative infrastructure.

The Aloha Council support also will include the expertise of the Scout executive and field service and support service directors, who will manage district directors and work with camps and programs, he said.

Maui County would have a district director, Scout shop manager and a camp manager on island, he said.

The Maui County executive committee will develop its own budget, which will be approved by the Aloha Council. Sulzbach emphasized that it would be a bottom up — not top down — approach on how money will be spent.

Maui County membership on the Aloha Council governing board could include four people, the same number as Hawaii island, Sulzbach said via email. The board currently consists of 52 members, 47 from Oahu, the four from the Big Island and one from Guam. There are two open seats, one each from American Samoa and Kauai.

Fees would rise from the current $34 to the Aloha Council’s $48.

If the merger goes through, the $15 would go toward Maui County operations, not for the Aloha Council as a whole, Sulzbach said.

Attendees also expressed concerns about the 212-acre Camp Maluhia, which is in need of upgrades and repairs. Sulzbach said that Maui County would retain control of the camp and that there are no plans to eliminate the cabins.

Major projects at Camp Maluhia may require a capital campaign, he said.

In response to a question about why the Aloha Council would want to add Maui County, Sulzbach replied that the merger would provide an opportunity to gather all Scouts in Hawaii and be “one voice.”

“What we get out of it is to be together as one Scouting program,” he said.

Aloha Council has inquired about a merger in the past, but Maui County has declined, Sulzbach said.

One of the more passionate attendees, Fred Ventura, who has been part of Maui Scouting for more than 30 years, said past merger attempts were handled differently with more opportunities to weigh in and to try and resolve problems.

Ventura said he’s not “anti-merger,” but he was “anti-takeover.”

Kakihara said the difference with the merger proposal this time is that it comes with the pending loss of Mormon Scouts. He said his “heart hurts” considering a merger and losing the independence. But from a financial standpoint and for the stability of the council, he feels the merger is needed.

It would be better to use the “community money” that could sustain the Maui organization to build programs and membership, rather to just remain independent, he added.

Kakihara said that a merger could be forced by the national organization due to Maui’s dwindling numbers and that he preferred having the councils forge a merger.

Ed Reinhardt, the president of the Latter-day Saints Kahului Hawaii Stake and a former member of the Maui County Council, said he supports the merger and commended the local council for exploring it.

“They are looking out for the best of the county and the youth in the community,” Reinhardt said Wednesday.

He said that the Aloha Council “is a good council” and he wasn’t sure the Maui County Council could survive with the smaller numbers.

Not all of the Mormon boys will be leaving Scouting, Reinhardt added.

“We took a survey and they were some boys that were still interested. We encouraged them to join troops in their community. There still are going to be boys in there,” he said.

“It is still a great program,” Reinhardt continued. “It’s just that the church is looking at a program that will fit the worldwide initiative the church has for the youth of the church. That’s the difference.”

The Maui County Council will have a board meeting Wednesday to propose the merger with the Aloha Council, said Duc Button, Maui County Scout executive/CEO. A special meeting will be held Feb. 6 for board members to vote on the merger.

Aloha Council will have its board meeting Feb. 5 to vote on the merger.

Both councils have to approve the plan, Button said. Once approved, there will be meetings to discuss the details and to complete the paperwork.