Man in alleged mall attack had a murder conviction 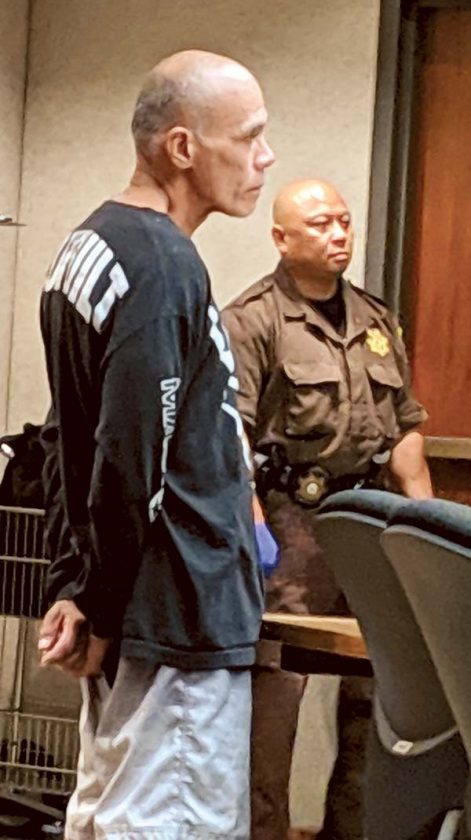 Raymond Birano Jr. appears in Wailuku District Court on Wednesday afternoon. His bail was set at $500,000 on charges of kidnapping and attempted first-degree sexual assault of a woman who reported being grabbed and forced into a stall in the men’s bathroom near the food court at Queen Ka‘ahumanu Center on Jan. 3. The Maui News / LILA FUJIMOTO photo

WAILUKU – A man arrested for allegedly forcing a woman into a men’s bathroom stall and threatening to sexually assault her at Queen Ka’ahumanu Center has a criminal past that includes being found guilty of murder for a stabbing in Kahului more than 40 years ago.

Raymond Birano Jr., 58, of Haiku is being held in lieu of $500,000 bail after being arrested Tuesday morning on a warrant charging him with kidnapping and attempted first-degree sexual assault.

Police said a 40-year-old woman reported she was walking to the women’s bathroom near the food court at about 2:30 p.m. Jan. 3 when she was grabbed by a man. She told police the man forced her into the men’s bathroom and into a stall, pulled out a knife and threatened to sexually assault her.

Maui County Prosecuting Attorney John D. Kim said he couldn’t comment on why Birano was temporarily released, because the case was pending. Police also declined to comment Wednesday because of the ongoing investigation.

“The safety of the community should be taken into consideration,” Fujieda said.

He said that if convicted of the charges, Birano could face extended sentences of life in prison with the possibility of parole as a multiple felony offender.

Judge Kirstin Hamman kept Birano’s bail at $500,000 and ordered him to stay away from Queen Ka’ahumanu Center and from the victim.

According to an article published in March 1979 in The Maui News, Birano was 18 years old when he was found guilty of murdering Clendes Fernandez. The 21-year-old was stabbed to death outside his Kahului home on June 18, 1978, when he intervened after Birano had threatened to beat his girlfriend, who was Fernandez’s stepsister, according to the article. Birano had gotten into an argument with his girlfriend after becoming upset because he couldn’t find a friend from whom he wanted to get a gun, according to the article.

Birano was incarcerated from April 1979 until he was paroled on Feb. 14, 2002, according to Toni Schwartz, public information officer for the state Department of Public Safety. She said he was returned to custody on a parole violation on July 19, 2002, and his parole was revoked for the balance of his maximum sentence.

Raymond Birano Jr. appears in Wailuku District Court on Wednesday afternoon. His bail was set at $500,000 on charges of kidnapping and attempted first-degree sexual assault of a woman who reported being grabbed and forced into a stall in the men’s bathroom near the food court at Queen Ka‘ahumanu Center on Jan. 3. The Maui News / LILA FUJIMOTO photo

A police officer sends vehicles away from the parking lot behind Macy’s at the Queen Ka‘ahumanu Center on Wednesday afternoon. Police were looking for a suspect in a gunpoint robbery of a shopper. The Maui News / COLLEEN UECHI photos

Jordan Spieth speaks to the media after his pro-am round. Spieth begins his 2019 slate at No. 17 in the world ranking.

Jordan Spieth hits from the second tee during the pro-am round of the Sony Open at Waialae Country Club on Oahu on Wednesday. AP photos