Mayor pulls back on pledge to open landfill Sundays 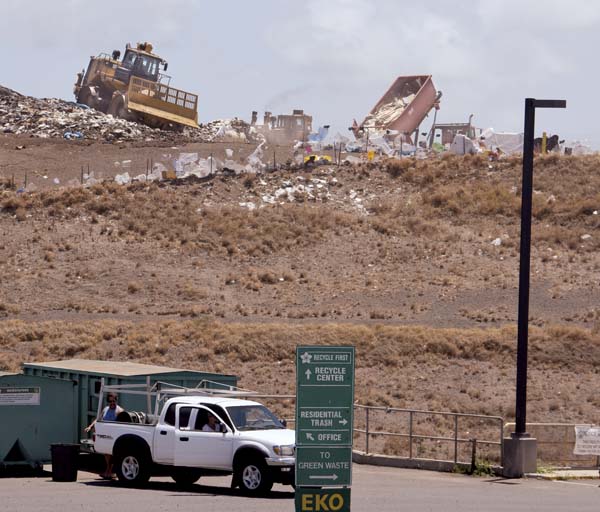 Trucks are shown offloading rubbish at the Central Maui Landfill in 2017. Mayor Michael Victorino backed away from his pledge Tuesday to open Maui landfills on Sundays, citing a current shortage of personnel and budgetary constraints. The Maui News file photo

Mayor Michael Victorino on Tuesday backed away from his inauguration day pledge to open the Central Maui Landfill on Sundays, beginning in February.

“I speak from the heart, not from prepared speeches,” Victorino said in a news release about his Jan. 2 address. “My inauguration ceremony was a spiritual, chicken-skin moment for me and my family. Unfortunately, my vision of expanding landfill hours to another day outpaced the necessary personnel and budgetary processes needed to make it a reality.”

Among his major concerns was having landfill employees already working Saturdays working Sundays as well.

“I stand by family and local values. Sundays are indeed a time for our landfill employees to spend with their families,” he said. “Many of them already work Saturdays, so adding a Sunday workday is a lot to ask.”

There currently is no time frame for when the details might be completed and the landfill opening Sundays, Perry said.

Former Environmental Management Director Stuart Stant told the council in March 2016 that he wanted to keep the landfill open Sundays and could do it with current staff. However, there would be $262,737 in overtime, and Stant said he was unable to force an employee who already works at the landfill on Saturday to work Sunday.

Victorino said the “community should have access in the long term to the landfill on Sundays, a second day when most people are off from work.”

“I believe that opening the landfill on Sundays would be environmentally sound and customer-friendly,” the mayor said.

The landfill had been open seven days a week for years. In July 2010, the Charmaine Tavares administration, in the middle of the Great Recession, trimmed the county landfill operations budget and closed the Central Maui Landfill on Sundays.