Some say second center not needed, others say it will save trip to town 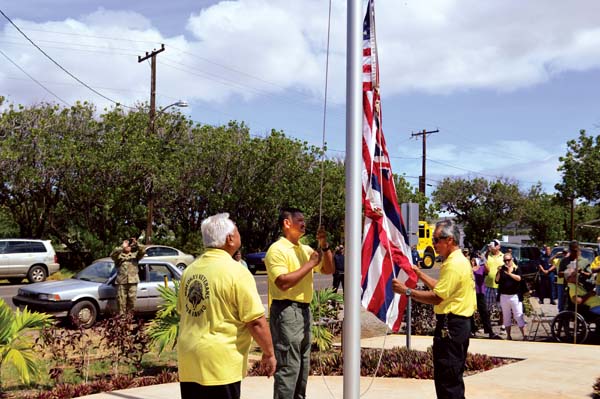 Plans for a second veterans center are moving forward on Molokai, upsetting some veterans who say they don’t need another center after the decadelong struggle to build the first one.

Cedric Duarte, spokesman for the state Department of Hawaiian Home Lands, said Tuesday that the department has completed the design for the new center and will start looking for contractors between now and the end of March. The one-story, 6,800-square-foot center will be built next to the Lanikeha Community Center on homestead land in Hoolehua. It will house both the veterans facilities and the DHHL Homestead Residents Center.

Rep. Lynn DeCoite said that $4 million in capital improvement project funds has been set aside for the project.

Veterans in Hoolehua say it will provide services closer to home, but others oppose the idea because the funds were supposed to go toward the existing center in Kaunakakai.

A couple years ago, DeCoite met with veterans on Molokai to discuss improvements for the existing center. She said the veterans wanted to finish paving the parking lot and upgrade the septic system, and they were looking at $400,000 in capital improvement project funds.

The problem was that the state couldn’t give those funds to the center because it was a private facility built on private land. In order to get the funds, the veterans would have to turn over the center to the state.

“I didn’t want to touch it because we didn’t want to give the center to them,” said John “Longie” Dudoit, who was the vice commander of Molokai Veterans Caring for Veterans until late 2016. “We worked hard for that first center. We wasn’t about to just give it up and turn it over to the state and have the state tell us how to run that center.”

DeCoite said that she “never expected” the veterans to give up the center, “but the ask was there.” Once it was clear the veterans planned to keep it, DeCoite didn’t want to see the money go to waste. So she spoke with different state departments to see who might have open land that the money could go toward. DHHL had land and was willing to work with the veterans on a new center.

“Lynn asked us (the veterans board) if we were interested in a partnership with Hawaiian Homes,” Dudoit said. “We said, ‘Why not? Either we use it or we lose it.’ ”

DeCoite said funding was increased to $4 million to cover electrical costs for the new center. She thought the project was “more than necessary” because of flooding and sea level rise concerns in Kaunakakai.

“King tides have already proven, the rains have proved it,” DeCoite said. “If there’s a tsunami, where they gonna go? And there’s many veterans in Hoolehua that do want it there.”

But Mike Helm, an Army veteran whose father Larry Helm spearheaded efforts to build the current center, said there’s no need for another one.

“They keep on saying this is for the Hoolehua veterans, when the people that started the veterans center in Kaunakakai were pretty much all from Hoolehua,” Mike Helm said.

Veterans on Molokai fought for years to open their own center. Larry Helm, a Vietnam veteran and former commander of Molokai Veterans Caring for Veterans, started working with a team of volunteers in 2000 to plan a new center where they could hold meetings and Veterans Affairs clinics. The veterans had been renting a one-room space in town known as “the bunker,” but it was small and lacked privacy.

Molokai Ranch donated about an acre for the center in 2004, but it took several more years to get the permits. In 2010, Larry Helm filed a complaint against the county over the delays, and the veterans finally received their building permit in 2011.

The long-awaited center opened in August 2015, though many veterans who pushed the project forward, including Larry Helm, died before the center was finished.

But Mike Helm said some veterans no longer feel comfortable coming to the center. He was frustrated to see veterans who weren’t involved in the original center now making decisions to build a new one.

“They were never part of the building process, the fighting the county,” he said. “It’s crazy how long it took to get a veterans center down there. This (new) veterans center, they never went through no meeting, no nothing.”

Sam Kealoha, a Vietnam veteran and Manae resident who worked with Larry Helm on the first center, said the veterans board has “not explained anything.”

“It’s just upsetting, this whole thing, that they would go ahead and do it anyway without consulting us, without even saying anything about it until the public knew about it before we did as veterans,” Kealoha said.

Kealoha pointed out that the 10- to 15-minute drive from Hoolehua to Kaunakakai is nothing compared to the hourslong trips that some of his friends on the Mainland have to make to visit a veterans center. He thought the concerns over flooding were a “silly excuse,” because that means the rest of the town should have to move out, too.

“It had nothing to do with us. It’s for them, it’s for the homesteaders, and they use the veterans who live there as an excuse why,” Kealoha said.

Dudoit, meanwhile, thinks the concerns stem from the fear that funds for the Kaunakakai center will be used for the Hoolehua center.

“I kept telling the veterans that it doesn’t matter if this place starts up,” Dudoit said. “The money is for this area. Nothing is going to be used from the center down below.”

Sam Makaiwi, commander of Molokai Veterans Caring for Veterans, supported the center and said that hardly anything gets built in Hoolehua. He said the center in Kaunakakai is “very small” and that the organization plans a lot of activities.

“The Hoolehua veterans, most of them don’t come to Kaunakakai,” said Makaiwi, who lives in Hoolehua. “The only veterans that come to our veterans center are those in Kaunakakai, not even the East End, and most of the people that are grumbling don’t even come.”

Makaiwi confirmed that the current veterans center will continue to operate even after the new one is built. He said that he would serve as commander until next year, “and then we getting out.”

Duarte said that while the center is being built, the department will hold meetings in the community to discuss how best to lease out the building. He explained that it could be through a mixture of nonprofits or homestead associations.