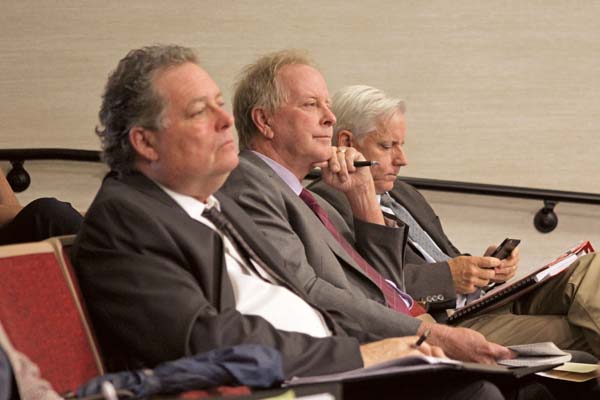 WAILUKU — More than 30 people showed up to testify as the vetting of four more department heads began on Tuesday morning.

Last week, the committee heard more than 70 testifiers speak on six department directors and the managing director; that meeting resumes today at 3 p.m. in Council Chambers.

Goode and Spence were the focus of much of the testimony Tuesday. Those who spoke in favor of them pointed to their experience, timely responses and support of affordable housing. But disputes over sand mining and the Molokai Community Plan were among the complaints lodged against the two directors, who served in Mayor Alan Arakawa’s administration.

Some testifiers who were involved in nonprofits supported Spence because of how responsive he had been in helping their causes. Realtor Donna Ting, who started the Laakea Foundation, a housing and work program for disabled adults, said that Spence would call her whenever he had an idea for her, even after work hours.

Cassandra Abdul, executive director of Na Hale O Maui, a community land trust, said that Reimann and Spence helped the nonprofit secure its latest affordable house by getting the county to buy back a home and offer it to the nonprofit as an in-kind grant, which she said previous directors had the option to do but did not.

But other testifiers criticized Spence’s previous role as planning director. Kai Nishiki pointed to Spence’s decision to approve changes to a planned seawall in front of the Hololani condominiums. A judge ruled last month that the project needed a new environmental assessment.

And, Molokai residents said Spence was difficult to work with during the update of their community plan.

“We had to fight tooth and nail to get and keep our East End and west end policy statements in our plan,” testifier Mahina Poepoe said. “We weren’t empowered throughout the process. We weren’t provided the tools that later on we found were available . . . which I do think would’ve changed the outcome of our plan.”

Spence said after the meeting that the Planning Department was trying to follow the council’s rules, which were very specific on what can be included in the community plan.

“I have no problem with people wanting to protect their resources and community character,” Spence said. “I think that’s very important. But also when we get up to the council and the council says, ‘Mr. Spence, why didn’t you follow the law?’ I don’t want that accusation either.”

As for the Hololani case, Spence said it will appear in court again and added that he did not violate any rules, as it was “within my authority to say whether this project was in substantial compliance with the permit.”

Many of the testifiers who favored Spence also supported Goode, who’s been the director since 2011, because of his experience and involvement in affordable housing. Susie Thieman, executive director of the housing nonprofit Lokahi Pacific, said that “the thing that stands out the most for me in working with David is how he gets back to you right away.”

“Because the Department of Public Works under David Goode’s direction overstepped their authority and renewed this permit that was used for illegal sand mining, the iwi kupuna are left in peril,” testifier Noelani Ahia said. “Now these permits also violate the community plan, which clearly protects the sand dunes as wahi pana (sacred places).”

Goode said after the meeting that “we look forward to clarifying testimony today with the council on Friday.”

“Most of the issues brought up were discussed on the council floor last term, though the six new council members may not be familiar with all the details,” Goode said.

As for Pearson, representatives from Hui o Na Wai ‘Eha expressed “very strong reservations” about his nomination, saying that he unfairly targeted kuleana kalo farmers for fines and did not properly enforce interim in-stream flow standards and stream work permits as head of the state Commission on Water Resource Management (CWRM).

“Mr. Pearson struggled and in many instances failed in upholding the public trust doctrine and water code,” said Lani Eckart-Dodd, treasurer of the hui’s board. “We found that he consistently sided with the interests of corporations that sell water for profit, like that of Wailuku Water Co.”

“Now that there are more established IIFS (interim in-stream flow standards) in streams on Maui and Kauai, more enforcement is needed,” Pearson said. “CWRM rules do not do enough to help with fair and proper enforcement. CWRM is working toward better methods of enforcement, backed by rules.”

Pearson said he would defer more detailed responses until he goes before the committee.

Teruya, meanwhile, garnered support mainly from within his department, as longtime employees praised his expertise and leadership as the former head of the Real Property Assessment Division.

Marcy Martin, the property technical officer for the division, said that when she was first hired, Teruya shared with her his goal of turning the division into a “nationally recognized role model.”

Martin said that through budget management, new technology and other changes, Teruya realized his vision when the division earned a Certificate of Excellence in Assessment Administration from the International Association of Assessing Officers last year. Under Teruya’s watch, the division also created a website in 2011 that allowed the public access to tax map keys and property records.

“I am endorsing Scott Teruya as finance director because I believe he can do for finance what he has done for real property,” Martin said.