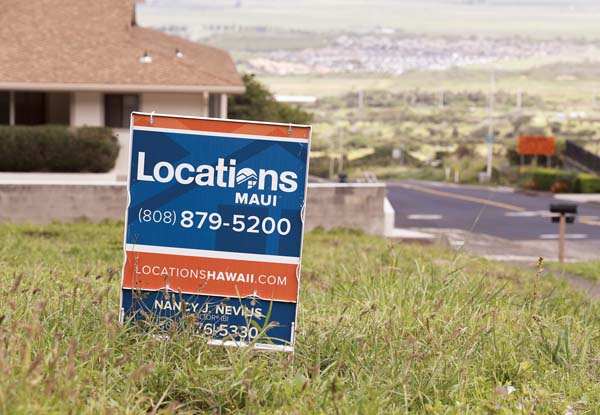 A real estate sign is shown on a property in 2018. While median home prices continue to rise over the same period last year, single-family residential home sales dropped 27.6 percent as compared to January 2018, while inventory decreased 15.4 percent to 495 for single-family homes and 19.7 percent to 566 for condominiums. The Maui News / MATTHEW THAYER photo

Sales and inventory took double-digit hits for Maui County’s single-family residential homes in January, according to statistics released last week by the Realtors Association of Maui.

Median prices are determined to be a point where half the sales for a given month are higher and half lower, which can offer a better assessment of the market than average prices, which can be skewed by large sales.

Last month’s single-family home unit sales were highest in Wailuku, with 14 sold at a median sales price of $607,500.

Single-family homes were costliest in Makena-Wailea, with a median sales price of $1.7 million. They were most affordable on Molokai at $499,850, followed by Wailuku and Makawao-Olinda-Haliimaile at $613,500.

Despite the decline in inventory, condominium sales saw a bump of 7.4 percent to 130 in January.

The affordability index for homes in Maui County dropped 4.2 percent to 46 in January. The index measures housing affordability for the region, where a higher number means greater affordability. For example, an index of 120 means that median household income is 120 percent of what is necessary to qualify for the median-priced home under prevailing interest rates.

Last year was among the lowest affordability indexes for Maui County homes in eight years. The median price for a single-family home averaged more than $700,000 for 2018 — the first time that’s happened in at least two decades. February, March and May were the only months in which the median dipped below $700,000.

Slowing home sales locally coincide with national numbers. The Federal Reserve responded to worsening affordability with a “patient approach” that kept interest rates the same last month, according to the association.

“If home price appreciation falls more in line with wage growth, and rates can hold firm, consumer confidence and affordability are likely to improve,” the association said.