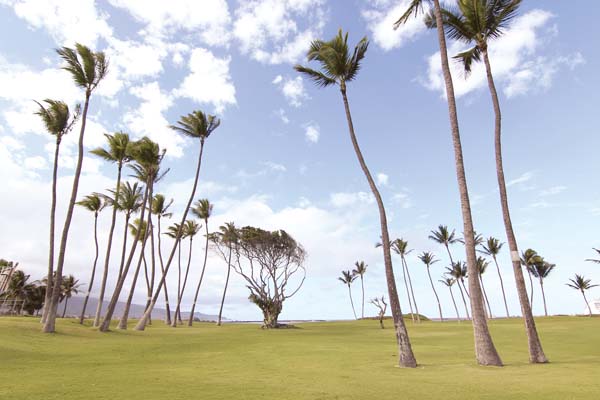 Palm trees sway on the site of the former Maui Palms Hotel in Kahului on Monday afternoon. Peter Savio, owner of the site and the Maui Beach Hotel next door, said that the goal is to start construction on a new hotel on the property by the end of this year. The Maui News / COLLEEN UECHI photo

The owner of the Maui Beach Hotel is planning to start construction later this year on a project that’s been in the works for nearly two decades — the redevelopment of the old Maui Palms Hotel property.

Peter Savio, who purchased the Maui Beach Hotel and the vacant lot where the Maui Palms once stood in July 2014, said Thursday that developers are in the process of submitting building permits and hope to start construction by the end of the year.

The new hotel would include nearly 140 units spread out across three buildings of about four to five stories each, as well as a two-story lobby, swimming pool, a small grill offering breakfast and a gazebo for special events.

The vacant lot was once home to the 102-room Maui Palms Hotel, built in 1953 and all but demolished save for one building in 2002, according to a final environmental assessment for the project. Elleair Hawaii, the former owners, planned to build a new hotel on the site and received a special management area use permit in January 2002. 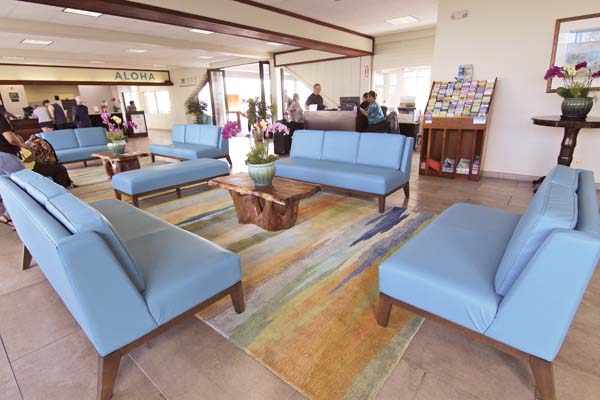 In addition to building a new hotel next door, owner Peter Savio also wants to renovate parts of the Maui Beach Hotel, including possible upgrades to the lobby.

Elleair started construction in 2005, but plans stalled when the U.S. Coast Guard received approval for a new access road to the existing beacon on the property in 2007. The approval required an environmental assessment and shoreline setback variance for the demolition of the remaining building. In 2010, Elleair signed an access easement relocation agreement with the Coast Guard that allowed the demolition to move forward.

In 2014, Elleair received a two-year time extension to complete construction and sold the property to Savio, a housing developer and owner of the Pagoda Hotel on Oahu. The $33 million purchase included the Maui Beach Hotel, the old Maui Palms site, the Elleair Maui Golf Club in Kihei and a vacant lot on Hawaii island from Daio Paper Corp. of Japan.

Savio said he kept the golf course — which was renamed the Maui Nui Golf Club — but sold the vacant lot on Hawaii island at the same time that he closed the purchase, because he wasn’t planning on developing there.

When he first bought the property in 2014, Savio shared his plans to build a new Pagoda-style hotel on the old Maui Palms lot, but rising construction costs forced him to request time extensions from the Maui Planning Commission in January 2016 and November 2017.

Now, Savio hopes bringing on the former head of Aqua Hospitality as a partner will help the project get financing. In December, Savio asked to transfer the SMA permit from MPV Holding Co., of which he is the president and managing partner, to AmperSand Venture 2 LLC. AmperSand’s registered agent, Benjamin Rafter, is the chief executive officer of OLS Hotels & Resorts and former president of both Aqua Hospitality and Aston Hotels & Resorts. 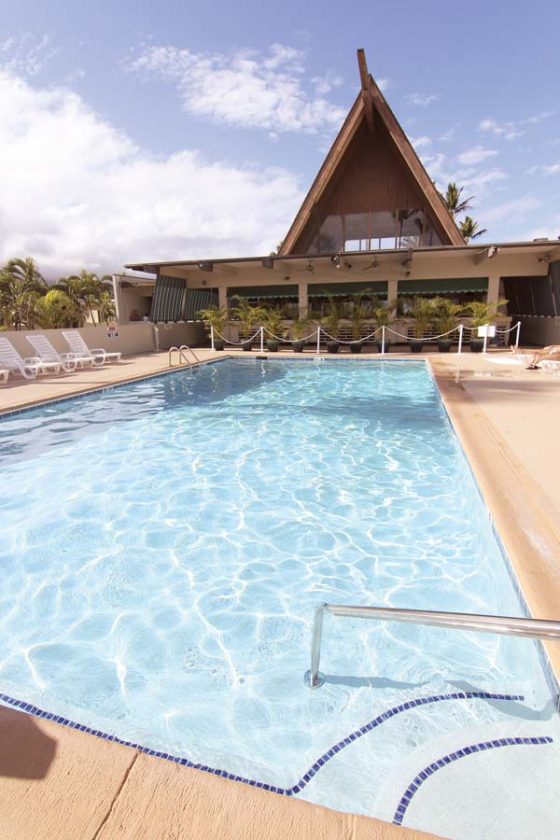 Guests lounge by the pool at the Maui Beach Hotel on Monday afternoon. Hotel owner Peter Savio said he plans to put “a couple million” toward renovations at the hotel, which could include upgrading the lobby, fixing up bathrooms and adding solar panels.

Savio explained that developers will need to borrow about $30 million to $40 million for the new hotel, and that lenders want someone with a history of operating hotels.

“I’m not a hotel man,” Savio said. “I’m a developer. I do mostly affordable housing. So we just think it’s good sense from the point of view of the lender, and will probably help us get a better deal and a better rate to bring on a hotel man. We were going to hire Ben to manage the hotel anyway.”

Savio said Rafter is being added on as an equal general partner, and all of the previous partners, including Savio, are still staying on the project.

“Our goal for Maui Beach is to upgrade the property, make it a little better, but still keep it as a local hotel,” Savio said.

While the primary hotel market remains in South and West Maui, the Central Maui market is growing. Barely two miles away from the Maui Beach Hotel, R.D. Olson Development is planning a 200-room hotel on 5 acres of the Maui Business Park Phase II. R.D. Olson also opened the nearby Courtyard by Marriott hotel next to the Kahului Airport in 2012.

But Savio said he believes there’s still plenty of demand to go around. The other hotels, he said, are geared toward airport travelers, while the new hotel he’s building aims to be “a regular tourist or local hotel.” He added that the new hotel would be built in a different setting — on the ocean, with a lot of green and open space — and would be cheaper, around the $200-a-night range.