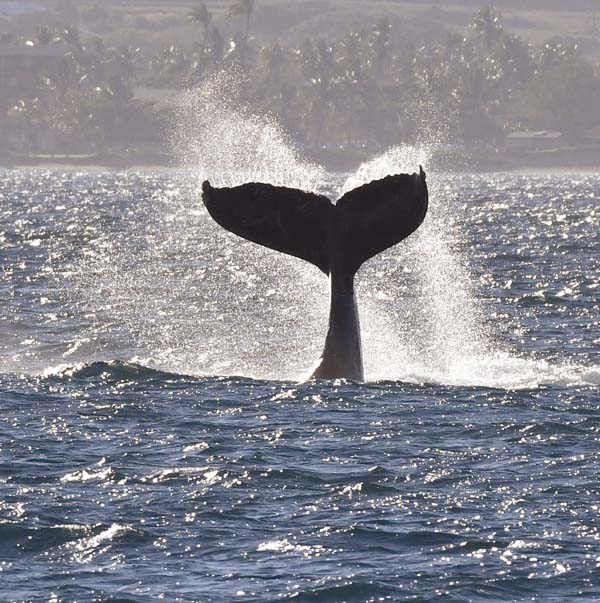 After a slow start, humpback whale season seemed to be in full swing early this month, with the gentle giants spouting, tail-slapping and breaching all over Maalaea Bay. This photo was taken from the beach at Haycraft Park in Maalaea. The Maui News / MATTHEW THAYER photo

The Pacific Whale Foundation has offered up its photo files accumulated over nearly four decades to the Happywhale citizen science project to better understand whales and their population trends.

A project of Ph.D. candidate Ted Cheeseman, scientists at Cascadia Research Collective and Allied Whale use the happywhale.com photo ID system to match whale photos submitted by the public to a catalog to estimate population trends, the whale foundation news release said.

By partnering with Pacific Whale Foundation, the catalog adds 39 years of photo ID research to its extensive data set, the whale foundation said.

“In order to understand whales and their population trends, we need more data than has been available; contributions from citizen scientists are critical,” said Cheeseman. “We may not have the luxury of time, especially for whales, such as the humpback population in the north Pacific. Most subpopulations in the ocean basin were recently proposed for delisting under the Endangered Species Act.

“However, to successfully and responsibly delist a species or population, its size and projected growth must be well understood.”

Chief Biologist Stephanie Stack with the whale foundation said that it has been an “enormous challenge” for researchers to compare humpback whale catalogs because of their size and scope.

“The technology used by Happywhale is an incredible advancement for our field and will provide important insights into humpback whale movements, connectivity and survivorship,” said Stack. “A comprehensive assessment of humpback whales in the north Pacific is an ambitious but important project and can only be achieved if researchers in different regions are working together.”

With each new photo, Cheeseman said researchers can answer many questions: How long does a whale live? What threats do whales face from ship strikes and entanglement in fishing gear? What are the whale’s chances of surviving one year over the next?

Members of the public may submit their photos to Pacific Whale Foundation’s research team via its free citizen-science mobile app: Whale & Dolphin Tracker, which displays sightings in real time, at pacific whale.org/research/hawaii-wdt-sightings-map/.