Project would widen the existing beach by 35 to 150 feet 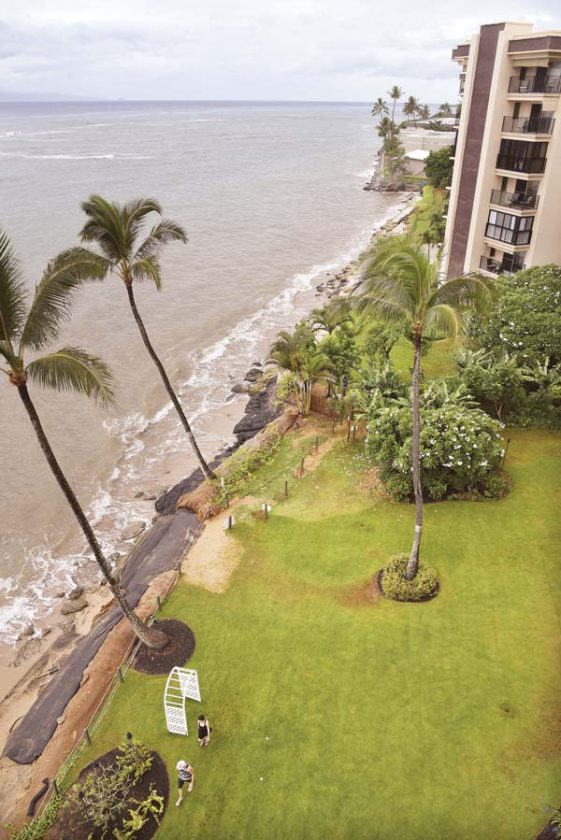 Shoreline hardening, erosion and sea-level rise have taken their toll on the Kahana shoreline, as shown in this photo taken in July 2016. The Kahana Bay Steering Committee is proposing a beach nourishment project to restore the coastline. The Maui News / MATTHEW THAYER photo

The committee, which represents nine oceanfront condominiums and one kuleana parcel along the Kahana Bay coastline, is working with the county Planning Department to rehabilitate and preserve the beach. Plans call for transporting 50,000 to 100,000 cubic yards of sand from areas offshore and building structures that would extend from the shoreline to retain the sand and stabilize the beach. The project would widen the existing beach by 35 to 150 feet.

An environmental impact statement preparation notice for the project was published in Friday’s edition of “The Environmental Notice.”

“Renourishing the beach is probably as cheap, if not cheaper, than hardening the shoreline,” said Jim Buika, a coastal planner with the county. “And because we found sand, that’s the direction that the county’s pushing. We don’t need any more seawalls.” 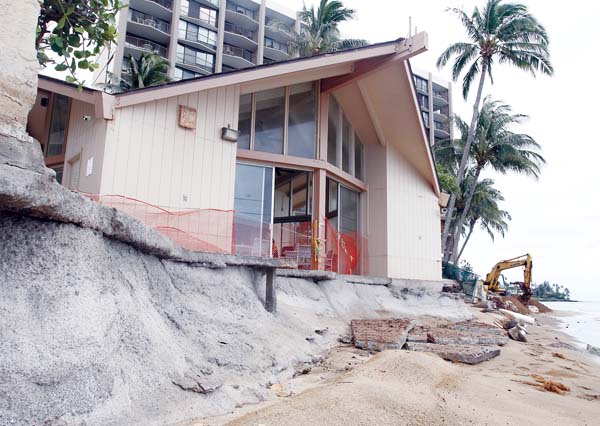 The Royal Kahana Maui by Outrigger faced erosion along the shoreline that threatened structures in this photo taken in May 2016. A beach nourishment plan could expand the beach 35 to 150 feet. The Maui News / CHRIS SUGIDONO photo

Coastal erosion has long been a problem in Kahana, made worse by shoreline hardening efforts. Every time a resort or condo builds a seawall or hardens the shoreline fronting its property, waves get pushed toward neighboring properties, which then build seawalls or put up sandbags of their own.

Four of the condos have existing noncontiguous seawalls; five have either no protection or have deployed “soft” measures that include sand-filled fabric revetments or restored sand dunes with native plants.

Analysis of historical aerial images indicates that the Kahana Bay shoreline recedes at an average rate of about 1 foot per year, according to the EIS preparation notice.

In 2016, the county conducted a study on the practicality of beach nourishment in the area. The study identified many sand deposits offshore, two of which are within 1 mile of Kahana Beach. The total amount of sand available at these sources was estimated to be more than 250,000 cubic yards. Buika said the area is composed of “big sand fields” that likely came from the beach.

“Fortunately, it’s very close,” Buika said. “The beauty is, from initial surveys, there’s no coral heads or coral reef between the sandline, which makes it easier.”

Buika said it’s not clear what the impacts of the project would be, which is why an EIS needs to be done. Consideration has to be given not only to the offshore ecosystem but also to the nearby surf spot at Pohaku, or S-Turns, Beach Park.

The project would cost about $8 million in private funds. Buika said the condos have a cost-share agreement that will fund the EIS, the permits and the project. The goal is to finish the EIS this year, apply for permits in early 2020 and start work by the late summer or fall of 2020.

Buika added that Hololani must remove its temporary sheet pile wall once the beach nourishment is completed — a condition of the special management area use permit it received from the Maui Planning Commission. Other condos do not have to do so because they were older walls that were grandfathered in, Buika said.

Kai Nishiki, a Lahaina resident and member of groups that have challenged seawalls in West Maui, was supportive of beach nourishment but also thought it was “a short-term solution to the loss of beaches and sea level rise.”

“I think that there should be conditions put on beach nourishment,” she said. “I don’t really like the idea of groins (shoreline-hardening structures). I am concerned about the impacts of that on the natural beach process. However, I do feel that beach nourishment is a better alternative than seawalls.”

Nishiki said that the project would allow more time to map out the managed retreat of buildings, roads and water and sewer lines.

“In the long term, we need to think about putting in passive infrastructure in that area,” Nishiki said. “Let’s have parks and wetlands and restored dune systems, so that when sea level rise is happening . . . yes, there are impacts, but it’s not impacts to buildings or roadways.”

Nishiki said there could be impacts to the surf break, wildlife or fishing spots from the beach nourishment project, but that it was a less harmful route than building a seawall or doing nothing.

“How I see it is right now we’re at a critical time in history where we’ve never witnessed the sea level rise this quick,” she said. “So at some point we’re going to have to decide what sacrifices we’re willing to make and what resources we’re willing to compromise in order to protect the buildings or restore the beaches. But I do see beach nourishment as the least impactful . . . in the arsenal of approaches.”

Comments on the project are due April 8. They can be sent to Samuel Lemmo, administrator with the Office of Conservation and Coastal Lands under the state Department of Land and Natural Resources, by email at sam.j.lemmo@hawaii.gov, by phone at (808) 587-0377 or by mail at P.O. Box 621, Honolulu 96809.

The Royal Kahana Maui by Outrigger faced erosion along the shoreline that threatened structures in this photo taken in May 2016. A beach nourishment plan could expand the beach 35 to 150 feet. The Maui News / CHRIS SUGIDONO photo

Lahainaluna High School’s Nanea Estrella is declared the winner of the girls 127-pound final at the state championships last month on Oahu. It was the third state title for Estrella, a junior. JASON HAYASE photo

Six of the seven groins are made of rock and one groin — Groin 3 — is a combination of rock with a concrete core. Groin 3 would be replaced by an engineered groin design based on current wave conditions and up-to-date sea level rise projections

Groin 3 of the seven-groin restoration project is severely destabilized, having lost a lower foundation support stone. Other damages include other missing stones and significant vertical cracks. The groin is a “safety hazard to beach users due to potential failure of the structure,” the draft assessment said. Sea Engineering Inc. photos

Maui police officers monitor the perimeter of Maui Community Correctional Center at around 3 p.m. Monday afternoon. Police were responding to reports of a “disturbance” and a small fire started by inmates in a module holding pretrial detainees. The Maui News / KEHAULANI CERIZO photo

Shoreline hardening, erosion and sea-level rise have taken their toll on the Kahana shoreline, as shown in this photo taken in July 2016. The Kahana Bay Steering Committee is proposing a beach nourishment project to restore the coastline. The Maui News / MATTHEW THAYER photo