Sculpture dedicated at west side school, inspired by alma mater 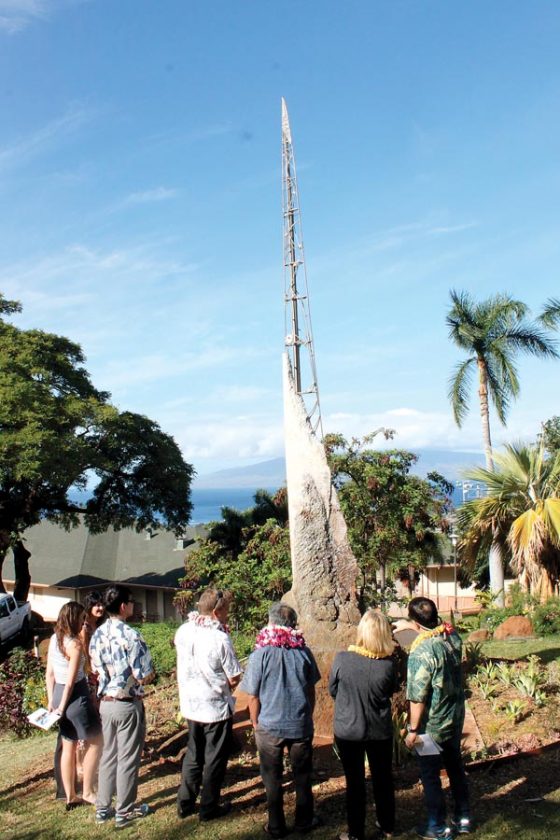 Ke Kukui Pio‘ole, the inextinguishable torch, sculpted by Randall Shiroma, was dedicated on the Lahainaluna High School campus on Monday morning. The sculpture was inspired by Lahainaluna’s alma mater and reflects Shiroma’s passion for Hawaiian culture and the land. The Maui News / DAKOTA GROSSMAN photo

“It’s an honor to be a part of this community,” said sculpture artist Randall Shiroma. “(The kids) are the foundation. We are doing this for them, for the future.”

The dedication ceremony began with a chant from Lahainaluna’s Hawaiian language class, followed by a blessing from the Rev. Amy Crowe.

The Hawaii State Foundation on Culture and the Arts supports artistic expression and commissions artists like Shiroma to create pieces for specific locations. The dedication of Ke Kukui Pio’ole was made possible by the foundation’s Art in Public Places program, the state Department of Education and the recommendations of the Lahainaluna Art Advisory Committee. Their goal is to spread awareness of all forms of visual arts and to educate and preserve the heritage found in the Hawaiian Islands.

“We were rewarded with the opportunity to engage in the creative process,” said Jonathan Johnson, executive director of the State Foundation on Culture and the Arts. “We’re grateful for this project by our artist, Randall Shiroma.” 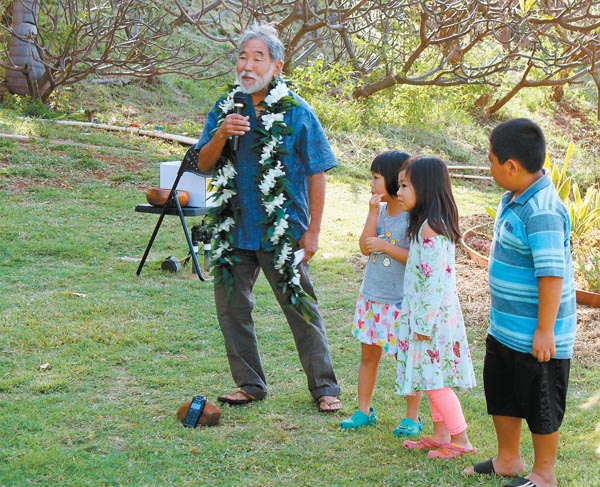 Randall Shiroma invites children, including his grandchildren, from the crowd during his presentation of Ke Kukui Pio‘ole. The Maui News / DAKOTA GROSSMAN photo

Nancy Young, member of the Art Advisory Committee and grant writer for the sculpture, added, “We wanted it to be something from today that would tell the tradition we have — that would be something for students and alumni to grow with.”

Shiroma was born and raised on Oahu. He attended the University of Hawaii at Manoa to earn his bachelor’s degree in mathematics. Later, he received his master’s in fine arts from San Jose State University, where he specialized in sculpture-ceramics. Over the years, he has displayed his pieces in many galleries and exhibits in Honolulu and various locations on the Mainland. Other sculptures included in the Art in Public Places program are displayed at Kau High School on Hawaii island and in Kakaako Park on Oahu.

“My work has always dealt with the land, for I believe that it plays a major influence in one’s thoughts and development,” Shiroma said.

Ke Kukui Pio’ole means an inextinguishable torch, which is inspired by Lahainaluna’s alma mater. The sculpture is not only a reflection of his work, but also his passion for Hawaiian culture and the land. 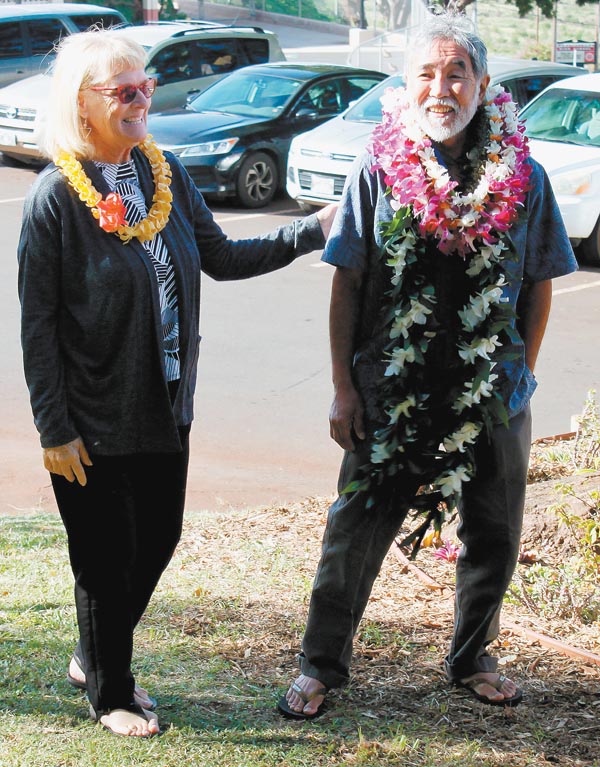 The Ke Kukui Pio’ole is made out of a combination of granite, marble, glass and stainless steel, which is a rather difficult material to work with. Shiroma started off using clay, but over time decided to make the combination of materials his medium of choice. This particular piece took him three years to complete. He is inspired by nature and hopes to evoke a sense of peace for viewers; however, he prefers to leave room for interpretation.

“The upper portion relates to the early Polynesian navigational chants. So, let’s say that we have to, like, guide ourselves to foster that spirit within us as well as enough to foster that spirit within the kids, the children,” he said. “It also reminds us of the role of Lahainaluna, in a sense that they are guiding us or guiding the students to navigate into the future.”

Lori Gomez-Karinen has played an influential role on the Lahainaluna campus for more than 40 years. She’s been a teacher, an adviser to the Hawaiiana Club and Boarders’ Chorus and has been recognized for her performances of the alma mater at each football game.

During the dedication ceremony, she provided her own interpretation.

The pointing of the sculpture “reminds us of our wayfinding ancestors and of the legacy they left behind,” said Gomez-Karinen during the closing remarks. “We navigate into our future by taking the knowledge of the past.”

Many of Shiroma’s recent pieces, including Ke Kukui Pio’ole, showcase a mooring hole at the center or base of the sculpture.­

“The mooring hole is to ground the people, to ground the students here so that they come back,” he continued. “There is a connection here in the community and I hope it draws people back. So that what they learn when they go away can be brought back and share it with the community.”