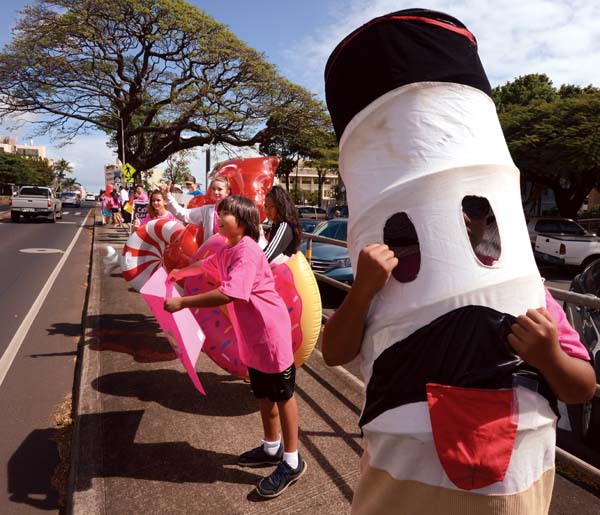 In honor of Kick Butts Day, students rally in front of the county building on High Street in Wailuku while taking a stand against the sale of flavored tobacco products Wednesday morning. Organizers said eight out of 10 teenagers who smoke in Hawaii started with flavored tobacco products, including vaping oils. Officials reported that even elementary-age students have been caught vaping at school on Maui. The event was sponsored by the Maui, Molokai & Lana’i Coalition for a Tobacco-Free Hawaii, Hawaii Public Health Institute, Maui Economic Opportunity and the Blue Zones Project. At the start of the rally, Maui County Mayor Michael Victorino and Chief of Staff Deidre Tegarden presented a proclamation declaring Wednesday as Kick Butts Day across the county. Organizers said 25.5 percent of high school students in Hawaii use e-cigarettes, while 8.1 percent smoke cigarettes. Tobacco-use claims 1,400 lives in Hawaii and costs the state $526 million in health care bills each year.

Kahoma Stream was without water Tuesday after storm debris clogged a ditch. While the water started to trickle back down Wednesday, community members feared the impacts to marine life.

Community members described Kahoma Stream as “lifeless and bone dry” after storm debris clogged a ditch and said it set back several years of work to restore the stream. TIARE LAWRENCE photos

The Maui High Performance Computing Center (pictured here) has led a team to make container technology available to laboratory scientists, engineers and software developers. Containers are basically packaged software that allows developers to more easily keep pace with rapid developments and makes it easier to transport and copy software. The center is composed of Air Force Research Laboratory researchers and Department of Defense contractors. It hosts one of the Defense Department’s five supercomputing centers. The Maui News / MATTHEW THAYER photo