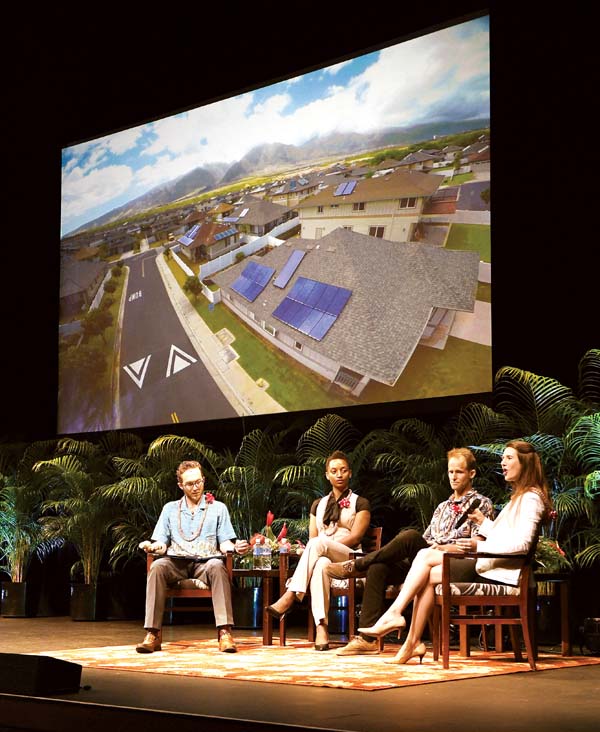 KAHULUI — Maui helped energize key talks about going green at the largest conference of its kind in the state last week, and leaders emphasized the county’s key position in leading the charge.

“Hawaii has been at the forefront of the commitment to 100 percent clean renewable energy for electricity, and so I think it’s so appropriate to have this conference here on Maui that brings stakeholders and those interested in 100 percent clean renewable energy to really talk about it,” Gov. David Ige said at the conference. “There is no other community like Hawaii. . . . We see how it’s in our interest to be truly sustainable and self-reliant.”

Although organizers changed the name this year from Maui Energy Conference to Hawaii Energy Conference (HEC) to reflect its growth, Maui remains a “locus” for major energy initiatives, its planners said. Maui leads the nation with the highest density of electric vehicle usage and is among the highest in the U.S. per capita for installation of photovoltaic systems. Renewable energy accounts for more than 30 percent of total energy usage on Maui.

It’s no wonder, then, that the sixth annual event would be held on the Valley Isle. The conference, organized by Maui Economic Development Board, drew more than 400 people Wednesday and Thursday to the Maui Arts & Cultural Center, an increase of more than 25 percent from last year, according to HEC Chairman Doug McLeod.

“Maui County offers a unique venue to have these conversations because of our efforts to stay at the forefront of changes in energy production, distribution and consumption,” said HEC Vice Chairman Frank De Rego Jr. “We have learned that people are willing to come to Maui from the continental U.S. and throughout the world to have serious, world-class discussions on energy.” 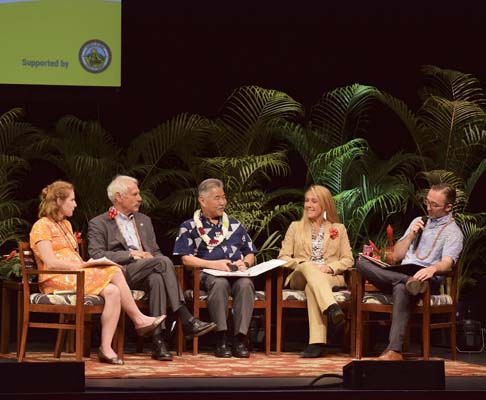 Highlights of the 2019 conference included Wednesday’s signing of a memorandum of understanding between California and Hawaii public utilities commissioners, who committed to collaborating in sharing best practices and knowledge toward the implementation of clean, renewable energy with the goal of reducing carbon emissions.

Another noteworthy item was event speaker Ige, who emphasized a win-win-win strategy in the evolution of our own energy sector, De Rego said.

“This goal of 100 percent clean renewable is not just the goal for the PUC (Public Utilities Commission) or just for the utility, it is really a community goal,” Ige said during an MEDB interview Tuesday. “This forum allows us to bring all stakeholders together to really talk about what are the right incentives, how can we create a win-win-win so we have a utility that thrives and a consumer that gets what they want, which is clean renewable energy when they need it, and that there are appropriate investments so that companies want to invest to help us reach the goal.” 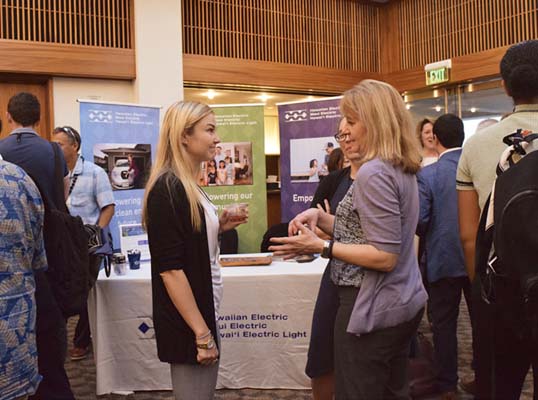 In all, the multiday conference logged about two dozen panel discussions ranging from Hawaii distributed energy sources; performance-based regulation and other new directions in state energy policy; innovations in regulatory policy; investment opportunities in energy; efficacy and resilience in operating isolated grids; and sustainable air tourism, among other topics.

Started in 2014 by MEDB and supported by the county’s Office of Economic Development, the conference gathered about 200 state and federal government policymakers, along with private sector leaders, to discuss the country’s changing energy landscape and its implications for power utilities and consumers. Since then, the event has grown and now welcomes more than 20 percent of its total participation from U.S. Mainland and international areas, organizers said.

“Energy leaders from throughout the nation have accepted our invitations to participate because of the timeliness and substance of what is discussed,” De Rego said.

Despite its growth, outreach and name change, the conference remains grounded in Maui, which it recognizes as a leader in green energy.

“Maui residents should be proud of the contributions they have made to the evolution of energy that is taking place in our county, our state and throughout the world,” De Rego added.