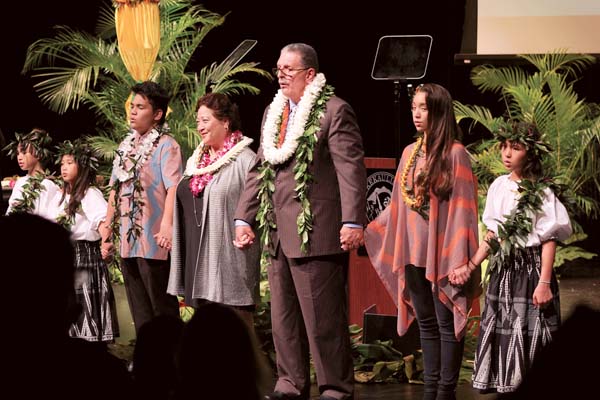 Mayor Michael Victorino (third from left) and his wife, Joycelyn Victorino, join hands with students during the singing of “Hawaii Aloha” after the State of the County speech on Tuesday. The Maui News / COLLEEN UECHI photos

PUKALANI — Mayor Michael Victorino voiced his support for a state House water bill, an underpass to Kihei high school and the Wailuku Civic Complex in his inaugural State of the County address on Tuesday night.

Within a week of taking office, Victorino’s administration responded to a 200-acre brush fire in South Maui. The county also weathered a major winter storm last month that caused widespread damage and power outages. Victorino thanked first responders who have dealt with natural disasters, including the wildfires in West Maui last year.

“Wildfires and a recent severe winter storm have been examples of our emergency first responders — firefighters, police and others — all working together in a time of urgent necessity,” he said.

Victorino stepped in at a time of major transition, less than a month after Mahi Pono purchased 41,000 acres of former sugar cane lands from Alexander & Baldwin. 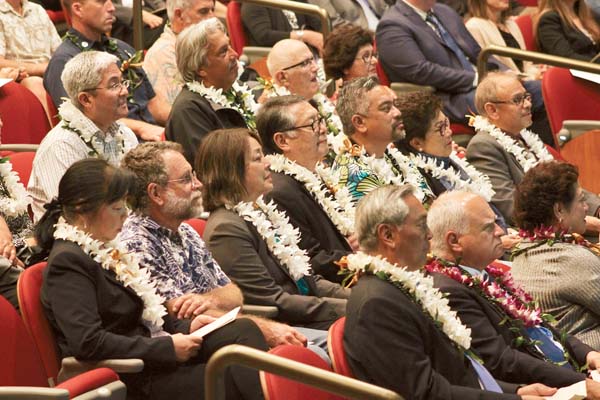 “Now, I have a great deal of hope that Central Maui can continue to stay green and beautiful,” Victorino said. “It can return to productive crops, such as squash, cabbage, corn and other edible crops. I’m hopeful that Maui will become a bountiful source of food, not only for Maui County, but for the state of Hawaii.”

Victorino said that he hopes Mahi Pono will give the majority of the jobs it creates to Maui residents, and collaborate with small farmers to reduce the cost of shipping and supplies.

“Meanwhile, I need a favor,” Victorino said. “Mahi Pono needs fresh water to turn the dreams of sustainable ag in Central Maui into reality. I have given my support to the state House bill to allow holdovers of revocable water permits to continue until application for state water leases is resolved.”

The mayor was referring to House Bill 1326, which has stirred controversy among opponents who say it steals water from East Maui and from supporters who say it ensures water for Upcountry and local agriculture.

Victorino said he knew water was “a tough issue for many residents, including our East Maui residents and taro farmers.” But he added that water provided through the permit ensures continual supply to 35,000 Upcountry residents, schools, Kula Hospital and the Kula Agricultural Park. About 80 percent of the water that the county delivers to Upcountry comes from surface water sources, Victorino said. 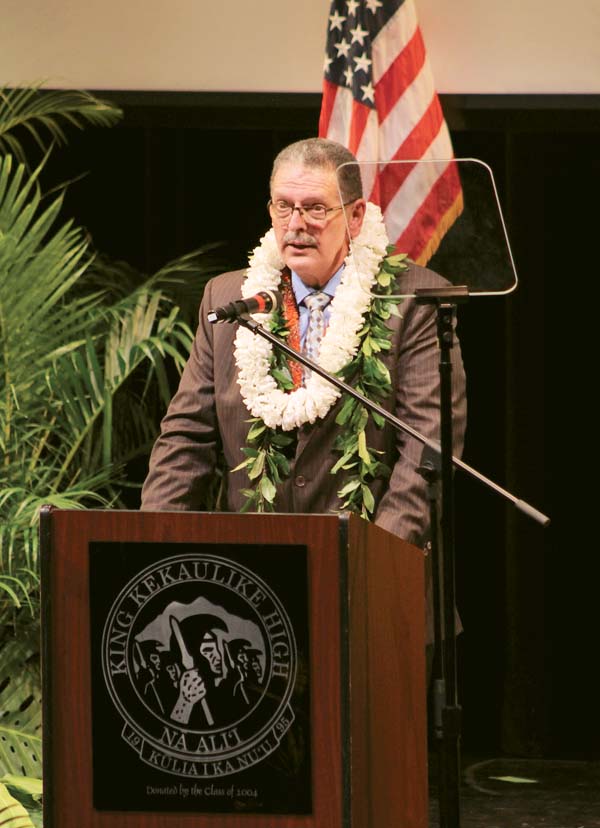 Maui County Mayor Michael Victorino addresses the audience during his inaugural State of the County speech on Tuesday night at the King Kekaulike High School Performing Arts Center in Pukalani.

The mayor also lent his support to a pedestrian walkway underneath Piilani Highway for the upcoming Kihei high school. South Maui residents have strongly supported the underpass, but the state Department of Education has said it’s not needed.

“It would allow students of the new Kihei high school to cross below that busy highway. Hint hint, state,” Victorino said.

Another hot button issue that Victorino touched on was the Wailuku Civic Complex, which he said would revitalize Wailuku town, offer more parking within walking distance of businesses and schools and create “a lively nightlife to attract young people to the area.”

The mayor also provided updates on upcoming housing projects, including Waikapu Development Venture’s affordable housing project between Honoapiilani Highway and Waiale Road. The project includes 68 single-family units, 12 duplexes and a neighborhood park, and is due to start construction soon. It will be open to families earning between $57,000 to $114,000 per year.

There’s also Catholic Charities’ $34 million project to build 165 affordable rental units for seniors across from the Kahului Foodland. The project broke ground in November and is targeted for completion in 2020.

The county also plans to partner with private and public entities to convert a set of old University of Hawaii Maui College dorms into permanent housing for homeless people and working families.

“This project is in its early stages, but it looks very promising,” Victorino said.

Victorino praised the county’s “strong, secure and robust” economy, marked by record-setting visitor spending and arrivals. However, he said was committed to managing the growth of tourism and protecting the environment. He advocated for recycling more wastewater, building runoff retention basins to protect reefs and planning for climate change.

Council Chairwoman Kelly King said after the speech that she was “impressed with his delivery and his coverage of all the issues in the county.”

“I’m still looking forward to the collaboration part, because I really don’t feel like we’ve quite consolidated as a council working with our mayor,” she said. “We’re always going to have our disagreements in some areas, and hopefully we can come together on the big things.”

King said she was “happy to hear him proactively working” on the project to convert the old UH-MC dorms, but thought he “may have jumped the gun on the civic center.”

She added that there will likely be issues moving forward with the department director confirmation process, but said she respected the fact that Victorino had stepped back and let the council go through its process.

King said she was happy with where the council is at and hoped the body could get more face time with the mayor moving forward.

“I’m hoping that after we get the final directors in place that we can start working more as a team,” she said.

Maui County Mayor Michael Victorino addresses the audience during his inaugural State of the County speech on Tuesday night at the King Kekaulike High School Performing Arts Center in Pukalani.

Mayor Michael Victorino (third from left) and his wife, Joycelyn Victorino, join hands with students during the singing of “Hawaii Aloha” after the State of the County speech on Tuesday. The Maui News / COLLEEN UECHI photos

The Sabers’ Jasmine Clayton looks to pass while defended by the Bears’ Gracie Lawrence in the first quarter.

JEFF SULZBACH – Able to recruit with “one voice”