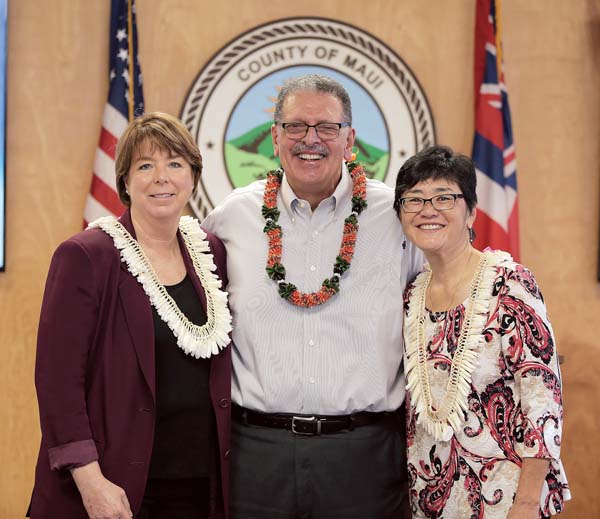 Maui County Mayor Michael Victorino poses Tuesday with the women he appointed to the Department of Housing and Human Concerns. Lori Tsuhako (right) was nominated to head the department and requires confirmation by the County Council. The department’s deputy will be Linda Munsell (left). The mayor made the announcement at a news conference Tuesday morning. County of Maui / CHRIS SUGIDONO photo

WAILUKU — Amid what has been a grueling vetting process for most county department heads, council members hailed the experience of Mayor Michael Victorino’s nominee for Department of Housing and Human Concerns director, Lori Tsuhako, who has been serving as the deputy director.

King said Tsuhako has been proving herself during recent budget talks at which she has been representing her department.

Friday was the last day of work for William Spence, who has led the housing department since last summer. Concerned about Spence’s lack of experience, council members voted 8-1 on Feb. 22 to end his bid to lead the department. That decision followed a 6-1 council committee vote to disapprove Spence on Feb. 7.

“I’m very pleased to have her considered as a nominee,” Molina said. “I believe her prior experience with the state and county will help by addressing the human concerns. And having the additional benefit of Linda Munsell will help with the housing area.”

“(Tsuhako) has experience in working with homelessness, she was the homeless programs administrator, and she’s worked with elected officials and private developers to implement effective homeless services,” he added.

Molina said the council will take action on the nomination as soon as the end of March or early April.

The vetting process for 11 department heads that began this year has collectively drawn more than 100 testifiers; hours-long meetings that extended over many days; and heavy questioning by council members.

Nominees must first pass the council’s Governance, Ethics and Transparency Committee, chaired by Molina. He or she then heads to the full council for a final vote to confirm or deny.

Since the mayor announced nominees in December, eight have been confirmed. Director positions for county Housing and Public Works departments, along with county Prosecutor, have yet to be filled.

Victorino said he was confident in Tsuhako’s ability to lead a department that includes divisions to address community needs for housing, social service grants, immigrant services, veterans programs and support for young children.

The Department of Housing and Human Concerns has seven divisions and 129 employees. Its budget is more than $30 million.

“The mayor is very concerned not only about our human concerns but most especially about our housing,” Tsuhako said in a news release. “He understands that there is a real intricate connection between housing and the health and well-being of our community. I work with an awesome group of colleagues in the department. I know that they’ll continue to work very hard to get community and the mayor’s goals achieved.”

She holds bachelor’s and master’s degrees in social work and graduated from the University of Hawaii at Manoa.

Munsell has worked in DHHC’s Housing Division since 2010, according to the county. As its assistant housing administrator for the last three years, she led personnel and programs work.

She also has experience in grants and program budgets and human resources.

Munsell graduated from the Oregon Institute of Technology with a bachelor’s degree in industrial management and associate degrees in accounting and horticulture.

Tsuhako did not immediately respond to requests for comment.